He is nearing an ecstatic 4000-run mark in the IPL. He has collected in excess of 500 IPL runs from the last 10 games. His side is standing firmly at #4 on the current IPL 2017 charts with 6 wins already.

But captain David Warner’s own form is on cloud nine at the moment. If you simply glance at his recent IPL scores, you’ll understand who is actually sparking the brightest ray of light on Sunrisers Hyderabad’s hopes in this 10th edition of the IPL.

How do bowlers contain the man whose middle name seems to be carnage?

With 3 fifties and a hundred, Australia’s pocket dynamo has been horse-whipping opponents with utter disdain, importantly in a tournament where home fans expect the host nation’s players to dominate.

So the point is- is Warner reaching a Gayle-like league in the IPL-with his stats reaffirming his status as a T20 shark? Or, is the world yet to reconcile with the fact that a somewhat dainty looking Australian has already boxed some of the world’s fiercest bowlers with mighty ease?

With plenty of games yet to happen, it can be said for certain that an outlet to which some of the most brilliant names in the game belong- including none other than Muttiah Muralitharan and VVS Laxman- it’s a mighty Australian who’s commanding headlines on his own.

The rasp cuts off the back foot, the brutal pulls onto the midfield boundary, and above all, the mighty sprints in between the wickets, it ought to be said, David Warner happens to represent the best that the IPL represents.

A passionate athlete who’s bludgeoning runs, that too in a format where there’s hardly a dearth of big names like Gayle, AB, and Virat, to quote a few.

And the way it’s going, needless to say that the sun might set at the end of the day, but for now, it doesn’t seem as if it’s stop showering light on Warner and his mighty Sunrisers Hyderbad. 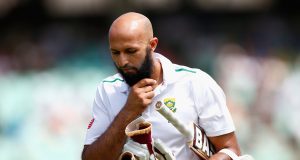 All’s Not Well With A Colossus Of Protea’s Batting, Hashim Amla