A Test bowling average that stands at par with the legendary Andy Roberts and fares better than the likes of Srinath, Steve Harmison and, compatriots- Mitchell Johnson and Brett Lee. A miserly economy rate, more economical than the likes of Flintoff, Shoaib, and Zaheer Khan. Yet, there’s very little that we hear or reminisce about Jason Gillespie.

Do you remember the tall, brooding fast bowler, perhaps etched in our minds as an angry Jesus Christ lookalike, seemingly furious, as he approached the popping crease?

Not the kind of guy who you’d find a book on. Not the guy you’d find coaches talking about, especially when advising young speed guns about bowling a scorcher of a delivery. Even when, at peak, he bowled well up to 145 k/hrs, way before the likes of Lee, Shoaib or Bond arrived in the game.

It must be said that in the 10 years he played, he did a fair bit more than just upset batsmen’s timber. And, in fact, left with an accomplishment that not even the likes of Mark Waugh, Damien Martyn, Strauss, Atherton or, the great Ian Chappell have managed.

‘Dizzy’ struck a marvellous double hundred; a beautiful 201 against Bangladesh in 2006, in the swansong series of his career, garnering more praise for that knock than what he did in a lifetime of playing cricket.

For his Chittagong effort, when Gillespie suddenly transformed from being an express fast bowler into a capable batsman, just when it seemed the world had finally begun celebrating the New South Wales bloke, he left the pitch. Looking rather unfulfilled and sombre.

Hip fractures, side strains, calf muscle troubles. Gillespie, it could be argued was the Shaun Tait or Ian Bishop of his time.

If batsmen were tasked with brute pace and had to guard their wickets, then Gillespie had twice as much responsibility. That of squaring against some of the most elite willow-wielders of their generation- Kallis, Lara, Sachin, Saeed Anwar- and handling a vulnerable frame. A frame more reactive to injuries than one is to Navjot Sidhu’s commentary.

It was never easy for batsmen when a ball was thrust with pace and aggro from a frame of 1.95 meters. Yet, somehow, Jason managed a fantastic aggregate of 401 international wickets. 259 of those in Tests, including 8 five-fors. 158 of those came against opposition that mattered- India, New Zealand, South Africa and England.

Constantly reconfiguring his bowling run up, Gillespie went from a long, scruffy but feisty build up to a truncated run checkered by some brisk pace.

And, while there are some fine memories of subduing the West Indies at their home in 1996, and of trouncing England in the Ashes, 2005, the finest tribute to Gillespie was echoed by his famous bowling partner. Glenn McGrath credited Gillespie for possessing both nagging pace and accuracy that championed Australia’s cause. In McGrath’s view, there haven’t been many who’ve elicited as many plays-and-misses as Jason.

In that rests Gillespie’s often undervalued contribution and a trickle of pain. It could be argued that for as long as he will be remembered, he might be tagged as Australia’s number 2 bowler. 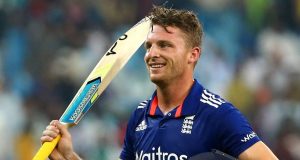 Shruti Banerjee - May 30, 2019
0
Jos Buttler – the one name from the England squad is enough to frighten the opponent, isn’t it? From getting dismissed for a duck in...