Cricket never quite ceases from surprising us. Often, in a manner, you’d liken to a bull offering its own horns to the spectators before the crowds run for cover with the beast uncaged. Right from the purview of rewarding the West Indies, a team currently languishing toward almost the bottom of the tables- in either format- with successive World Cup victories in 2016 to giving Lasith Malinga a reason for existence in the competitive game, it can be a ceremony to cherish. For life.

But when it begins to sneeze right on the spectator’s face, it can unravel rather bizarre outcomes such as Herschelle Gibbs dropping in the infamous 1999 World Cup. Or, the sight of a heavily moustached Kapil Dev crying like a mouse on national television whose cheese, it had seemed, had been moved, when the legend was confronted about match-fixing allegations.

What makes Cricket stable, however, is the phenomenon of cricketing terms that symbolise so many things to so many people, from discerning lenses. As an instance, a batsman nicking a ball but refusing to move could be a bowler’s greatest nightmare, just as bad as that mother-in-law who overstays her welcome at her son-in-law’s place. Or, a frontline pacer delivering a no-ball right on the final delivery where just 1 run was needed could end up as the losing side’s most hunted man. Perhaps, also the most poached.

So, in the wake of Cricket’s mighty charm on fans by virtue of its diction and parlance, we bring you 5 funny terms from A-E, in the first set in our series on Cricketing glossary: understanding the A-to-Z of this great game of ours.

1. A for Adelaide Oval

A stadium that’s bigger than the whole of Trinidad and Tobago but one where every great knock is applauded with a sound of millions clapping in chorus, a sizeable equivalent of Diwali noise heard in Delhi each year.

Cricket’s equivalent of the greatest insult lamented against a batsman. In other words, a mode of dismissal that’s as morale-crushing as Australia losing to New Zealand. Utterly devastating in its treatment of damaging a batsman’s psyche but, often a phenomenon that makes batsmen chuckle, only when they are bowled off a no-ball. Something that a batsman truly loathes, made worse by loud celebrations by the bowling side; a phenomenon that springs to life a timber-crushing sound that puts the woodpecker’s drilling cacophony in your backyard right up amongst the worst singers you’ve heard in life- such as- Justin Bieber and Lil’Wayne.

A tall man who made winning a habit for the West Indies, especially during the 70s and mid-80s where it seemed, the West Indies might ban Marijuana or purple coloured oversized hats from their islands but not lose a game of Cricket. Bowler destructor, leader of men and, inspirer of confidence, Clive Lloyd, it does seem is contesting with bad karma, after all, having to see the waning fortunes of his currently depleted West Indian side that have lost consistently against all teams but, Afghanistan.

If you wish to irritate your opposition to death, serving them outright misery, right before the start of a game, simply utter the words, “may Duckworth-Lewis method bring your game down today”. A clever, math-based system of intricate albeit confusing cricketing calculation that best serves its rather unsettling purpose when either a South Africa are to be plugged out of a contest or when suddenly, seemingly unhappy with the excitement a Cricket game produces, rain gods decide to piss on our favourite sport.

Rumour is, there are more games lost by sides that seemed destined to win by Duckworth-Lewis method than the number of times Ajit Agarkar has scored a duck or finished wicketless in Cricket.

The team Barmy Army remains in awe of, braving the heat, withstanding showers and sandstorms whilst wearing extremely abhorrent clothes. An extremely successful Cricket-playing side whose prowess can be measured by its record of having won just 1 major cricketing competition in over 200 years of playing the very sport it invented. Rumour is, if England fail to win the 2017 Champions Trophy then, Donald Trump will threateningly enter International Cricket, fancying his chances of succeeding at a global stage with his playing eleven featuring Danny Devito and Meg Ryan. 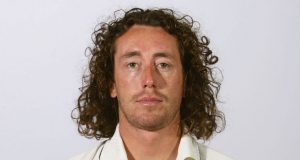 Ryan Sidebottom Names Only Seven English Cricketers In His All- Time...

Dev Tyagi - January 15, 2018
0
In an era swarmed by alluring surnames like Kitchen, Hope and, Dickwella, the name Sidebottom offers a fitting throwback to an era where left-handed...