Dravid finally earned it. But only after retiring. Laxman’s earned it as well. That’s despite the BCCI not conferring upon him a farewell that was lavished on others who played he alongside him. Kallis? Probably wouldn’t care too much. To many, quite frankly, it probably doesn’t matter if Sarwan ever got it.

The feeling of being recognised, being regarded as an equal amongst others should fundamentally hold the greatest value for a cricketer. Above winning prize money or gathering plaudits.

Still, many don’t quite get what they deserve.

No other batsman, not even ‘The Wall’ or ‘King Kallis’ has defined a lack of recognition as profoundly as Michael Bevan, despite finishing with what could be considered staggering achievements- 6900 plus ODI runs, 46 fifties and a stunning average nearing 54, better than most modern-day masters including, Ponting, Lara and, Tendulkar.

But what makes swallowing the bitter pill of Michael Bevan’s highly undervalued career (slightly) bearable is the sheer lack of worry it brings to the man himself. Ever a gentleman and someone, who by pure virtue of statistical gatherings, ended as a giant of Cricket, it won’t be unfeasible to judge true worth of a modern-day finisher against Bevan-esque yardsticks.

In a game that’s largely become a pale shadow of its former self, where clubbing sixes and destructing bowlers find greater priority over tiring out bowling opponents, Bevan represented an era where batsmen’s real victories were symbolised by taking their side home, remaining unbeaten. Holding the fort. Till the very end.

And in what could be called a relatively short career, that began when Brian Lara made 1994 his own with that 375 and ended in 2004, with Australia’s cricketers being at peak of both fitness and form, Bevan’s presence lent solidity to a side that seemed an indomitable force even when confronted with overwhelming odds.

Part of two successful world cup campaigns-1999 and 2003, representing an Australia that ran on the momentum of a Mark Waugh, constructed impenetrable fortresses around the world under ace leader Steven Waugh, where there was both exuberance in Warne and true grit in McGrath, Bevan made a name for himself as being the team’s crisis handler.

Whether it was that cunning that accompanied the ball when it was cleverly dissected between the cover and point boundary or that familiar display of boundless concentration, Michael Bevan often stood between Australia and its opponents like the famous Rock of Gibraltar- unbent in focus, unsullied by opposition’s efforts of pulling it down. On most occasions, the phenomenon resulted in concocting jewels on 22 yards, such as that famous 102 against New Zealand in 2002 at the MCG, or that princely 65 in a crucial semi-final World Cup game against the Proteas at Lords, 1999.

But the inning that truly marked the left-hander’s arrival in world cricket was a Sydney special at the SCG in 1995-96 against the West Indies. In a defining 78 off 88 balls, Bevan rescued a team wilting under pressure into being an outfit that successfully punched above its weight at the back of Australia’s go-to man.

Where batsmen sweated under pressure, nearly dehydrating from their own anxieties, Bevan, it seemed, was rejoiced by challenges. His batting lacked the pleasing aesthetics that one associated with a Kumar Sangakkara or a Brian Lara. No long hops on the crease. No massive exaggerated follow-throughs to a stroke hit with genius. Bevan had none of it.

But what Australia’s first Canberra-born had, however, was an immense calm under testing times. It is then both grimly sad and hugely unsatisfying that how a player of Bevan’s sternly studious mind never made that far in Test Cricket- playing no more than 18 games- and how, to this day, the man is less recounted when the discussion of being the game’s best finisher brings only a Hussey or a Dhoni into the fray. Both, with due respect, being products of an era where cricket pitches went as flat as an LG or Samsung’s flat television set.

But while a lack of respect paints this legendary career with an unfulfillment you could perhaps liken to a Tom Cruise or a Keanu on having not won an Oscar yet, you’d feel somewhere- a Bengaluru coaching clinic or the Harare Sports Club, wherever youngsters are taught valuable lessons on Cricket’s finer aspects; such as on forbearance, coaches, would very likely be citing a Michael Bevan example. 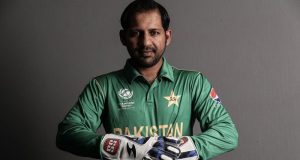 Has Sarfraz Ahmed sparked a renaissance in Pakistan Cricket?

Abhinav Bose - July 31, 2018
0
The volatility of circumstances in life has never managed to etch a calming influence on anyone. In an ideal world, stability is one facet...