The sun is shining, the weather is sweet. Long texts are drab, it’s all about the tweet. Let ’em say all they want; don’t hold yourself back West Indies.

How would’ve Tony Cozier reacted when the home side recently trampled Pakistan in a manner similar to their halcyon days of utter cricketing dominance in the 70s and 80s; when a Joel Garner blasted a Greg Chappel, where a Viv tore apart Lillee and Botham and, where Marshall derived pleasure in taking down Vengsarkar?

Even in a decline in his physical capacities, where he looked the part of a dilapidated structure, Tony Cozier’s failing health bore a striking similarity with that of a troubled, waning West Indies.

It constituted a surrendering of individual identities through a collective representation of the Caribbean spirit whose troubles, joys, and exultations were voiced by Cozier, a fatherly figure so piously devoted toward it, that it seemed, his frail body had been on account of the Bajan consuming a poison chalice for liberating West Indies from their blithe. It was a trauma of seeing a giant of the game succumb to a bout of prolonged suffering.

If Cricket is a gentleman’s game and it’s commentators, Cricket’s parlance, then in Tony Cozier, the game had a benevolent spirit who made candour met erudition joyfully as a Brian Lara square drive. A stroke that met awe-struck bowlers seem like fanboys acknowledging a session of belting; thwarted with ruthlessness.

Convening over a soul- stirring journey of a formerly grandiose West Indies- a side built on power and swagger of match-winners- with an alacrity mirroring a young student preparing studiously for an examination, Tony Cozier was a Cricketing wordsmith as well as a checkered orator. He spent the last decade and a half of his life examining the anatomy of West Indies’ decline akin to a physician examining a badly bruised body. Sullen at what he found but hoping for a telling diagnosis. Shaken at how bad the patient looked. But never irrationally spiteful of the scars sustained.

His was an illustrious career that ran five and a half decades,where the genteel figure of calm disposition witnessed it all- the ‘Whispering Death’s’ vagabond rundown of its opponents, a disdainful butchery administered at the back of Lara’s blunt blade and, a pitiful and recurring lean surrenders of a Jason Holder-led West Indies.

But perhaps nothing meant more to Tony Cozier than the magnetic pull he got from seeing the ‘Prince of Trinidad’ on song. You could sense the Barbadian in him transform into a keenly swayed college kid when Lara danced down the track on a simmering hot Sabina Park pitch or when he deftly let off a late-cut under the evening cool of Queen’s Park Oval. Something as innocuously simple as hearing a ‘magnificent shot by Brian Lara’ sounded like an ecstatic lyric from a Pink Floyd number when Cozier joined forces from the commentary box with Lara in sledge-hammering those who dared to attack West Indies.

But for someone who sat atop, literally speaking, the shiniest sparkle of a very West Indian era- punctuated by Sir Viv’s muscular pulls and the marauding seen through the Marshall-Roberts-Croft pace battery, not even the sorest outcomes such as the 5-nil drubbing of West Indies at South Africa, the series loss in Sri Lanka- 2002, the vehement player protests could dampen his spirit. Wherever the West Indies travelled, their fond patroniser travelled along.

Even when their cricket hit rock-bottom, Cozier didn’t let them feel the hit of the massive low. Alone. He felt the remorse, spoke of the golden era with a lump in the throat but with an encouragement that would instil hope in the most hopeless of the lot. Who else would worry writing about giving Bishoo another chance? Writing with unbridled enthusiasm about a glorious, indomitable yesteryear’s generation with the flair of an audience who exulted in the prime of a very 70s Woodstock era! Who would care to lament the implausible treatment meted out to a Shiv Chanderpaul but Tony?

In an age where criticism is expressed without context, Tony Cozier was a rare commodity in the respect that he had the spine to tether even those most contemporary West Indian cricketers won’t dare match eyelids with; the bizarre, self-serving WICB. When not describing with a familiar gush of passion his beloved West Indies, in a game, Cozier spent time mentoring talented writers on the fray. Firdose Moonda. And lavished praise on established tale-tellers like Vaneisa Baksh. In this utter sincerity to the game and to those who made it- lay Tony Cozier’s checkered journey. Inspiring but never over the top. His passionate defence of a flimsy West Indies. His criticism of the vexed powers that seem determined to destroy it. 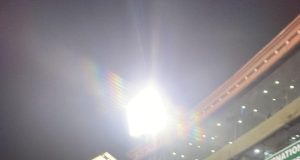