It’s Rawalpindi, March 2000. Pakistan square off against Sri Lanka. And somehow, manage to lose. By a painful margin of 2 wickets. Theirs is a side with batting heavyweights. Saeed Anwar. Inzamam-ul-Haq. Aamer Sohail. Mohd. Yousuf. Some 23000 runs between them. Their opponents, turn it on thanks to a famous destruction exulted by triumvirate- Vaas, Murali and, Zoysa. But one nimble looking man, a seemingly feeble youngster, makes a point. A marathon point. Following a rather sedate first-inning 10, he constructs a 107 of 250 balls. In playing for a whopping 322 minutes, he frustrates Muralitharan, prances upon Vaas. Where most great batsmen take about 5 to 6 innings to get going, Pakistan’s Younis Khan had announced himself from the very start.

Today, 17 years later, as the 39-year-old clean-shaven joe, now hailed universally as a legendary run machine hangs his boots, the scorecard still reveals runs. A promising 58 came in early against Windies in the swansong series of his career. Although a characteristically gritty Younis Khan hundred wasn’t blunted on a rather banal opposition, the West Indies would remember, that his final knock, that 35 at Dominica’s third inning proved it’s worth- by constituting one-fourth of his side’s runs in a low-scoring but a crucial game. Right before stepping into the West Indies, a classy 175 was thrust into the Aussie dugout.

In his 17-year career, indicative of a longevity equalling the expanse of the Great Wall of China, came runs. Many runs. Lots of them.While some ravishing knocks grew on the pink of flat batting tracks at Adelaide, Colombo, Jamaica and Rawalpindi, Younis ensured difficulties advertised their true power against his might. Throughout his cricketing journey.

For someone, whose batting average in his debut year of Tests looked a paltry 31 before plummeting significantly to 52 the very next year, batting was often defined by how well Younis tapped into the immensity of his own talent. A talent that remained unquestionable for establishing mountains of stats and seemed inscrutable in the sense that even when something as sordid as lulls occurred, it enabled the man to rise back on feet, quicker than a Windies lose a game inside 50 overs.

That said, as one of Cricket’s tireless heroes calls time on his career, what’s your byline on Younis Khan? Was Younis someone who derived a very senile pleasure in playing tyrant to fielders? Was he just some ball-belter, constant run-scorer who established a ritual of scoring tonnes of runs, in all weathers, cities and under different time zones? What was he after? Big scores? Or was he finding his own legacy, unsullied by stains of others’ greatness, such as a Jayawardene, Chanderpaul, Cook, Sangakkara, Kallis, or Dravid?

Could it be that Younis was one of the rare men the game loved back?

Whatever it is, in a game built on painfully arduous asks of fitness and rigour, Younis seemed a master who smoothly managed the grind and accepted challenges with glee. It’s both painful and rather abysmal to note how little has Younis been given credit for when in the absence of greats- Anwar, Inzamam and, Sohail- it was the right-hander who produced masterstrokes with the ease of a child picking a candy from a jar. Never sulking with the pressure around him. Always responding with calm and grace.

But life for legends, sadly, never comes without tricks played by pain. In the most-celebrated decade of his career, notably a purple patch of 2005-2015, where Younis blasted 7129 of his 10,000 Test runs, at a staggering average of 60, some of the life’s greatest challenges knocked hard on his mind space, broke inside his ambit of existence and shook him. If losing out on his nephew, followed by a close one he had described as his first cricketing coach and few others in a quick session weren’t enough to jolt him, then being away during occurrences of these tragedies only compounded his agony.

Interestingly, at all this time, Pakistan’s Cricket continued to mire in unwanted occurrences. Following disputes between national talents and the PCB, a flurry of incidences broke out with vehemence, reigniting buried ghosts of match fixing and spot fixing once again. At all this time, Younis calmly watched, perhaps deriving strength from that strange power of grief to channelize an inner torment into something brighter. Something meaningful. Something liberating.

It was during this tumultuous period of Pakistan’s recent cricketing history that knocks birthed from the very pulp of Younis’ mighty blade soared temperatures worldwide. He began a big-hitting juggernaut with a 215 against Sri Lanka. Soon a fiery 199 against India at Lahore came. It wasn’t just that Younis and his bat were dainty travellers abroad. At Leeds, in 2006, Younis sliced England into 173 pieces. He then stepped inside India’s Eden Gardens, considered to be India’s cricketing heartline, where a draw at the back of a relentless 107* zoned out Sachin, Dravid and Ganguly’s India.

Wonder why bowlers haven’t sledged Younis, by butchering his confidence by slipping in verbals from a gully or silly mid-off? It wasn’t that there weren’t antichrists of poetry around during Younis’ time. McGrath. Anderson. Warne. Nel. But, perhaps it was just that these temperamental legends knew well the futility of disturbing a monk, who seemed to be in a Zen state, especially when any 22-yard pitch became his den of infinite concentration.

In a career that’s seen a Lara own a game like no other, Sachin find himself amongst deities and an Akram find another home in India in the IPL commentary box, Younis’ outstanding commitment to his game and his want for staying utterly simple has neutralised a coloured judgement the world has long held toward’s his Pakistan.

So when the man responsible for scoring as many Test hundreds as Lara, one who lasted longer than Kallis, Inzamam, Waugh and, Ponting walked through that guard of honour- what may have his thoughts been? Who’s to know just what lay buried behind that evergreen luminous smile? 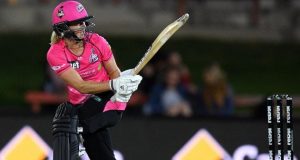 Chandhana Gogineni - December 14, 2018
0
Ellyse Perry is in scintillating form as the all-rounder scored two successive unbeaten knocks – 102 and 74-for the Sixers in the back-to-back matches...