In a platform that perhaps cannot be exactly hailed for indicating the true measure of a talent nor be denied the impact it yields toward improving a team’s chances, that Parthiv Patel bludgeoned a whopping 339 in Mumbai Indians’ 2015 season-winning campaign made an interesting case to examine a somewhat unfulfilled talent.

That Mumbai Indians have yet again made to to the finals of IPL 2017 with Parthiv contributing richly through a flurry of potent knocks exhibits the keenness of one of the most experienced among current Indian Cricketers, who despite being 32 befits the part of an 18-year-old college going bloke.

Parthiv’s recent scores- 52, 38, 25, 70, 33, 37- dumbfound the notion that his 2015 heroics for Mumbai might have been a strange one-off. Furthermore, the current rich vein of solid hitting and agile fielding- 2017- only solidify the belief among purists that the Gujarat-lad still has a lot to offer to Indian Cricket.

But big heaves, boisterous strokes and sharp catches kept side, where does Parthiv stand in the contemporary cricketing canvass of Indian Cricket?

How much value does he bring to the game, considering that by virtue of a somewhat consistency, there stands no shortage of contemporary keeping-batting talent in KL Rahul and Wriddhiman Saha?

Parthiv’s a career that began ages ago, at around the time when the likes of Sanga and Mahela were nearly newbies to World Cricket, the Lara’s and Chanderpaul’s still had a lot to offer to their side and when a Rangana Herath and Ashwin hadn’t even emerged on Cricket’s horizon as unarguably the game’s finest offies.

But at 32, despite being at the peak of fitness, considering you note that the puppy faced’s baby fat and loosely hanging muscle have been toned to fine measure what does the future hold for India batsman-keeper Parthiv Patel?

Furthermore, can Parthiv be contended with, seemingly banking on the player’s most vital cog in his cricketing timeline; the experience of being around since the early 2000s?

For someone who was birthed to Indian Cricket many summers ago, in 2003, when the triumvirate of Dravid, Ganguly and Tendulkar were in their prime, the number of times Parthiv’s appeared in whites and colour jersey bears an uncanny resemblance to his own diminutive frame.

This is rather unsettling considering one of the only unchanged figures witnessing inarguably a period of India’s most critical change of guard – the retirements of India’s Big 5; Tendulkar, Dravid, Ganguly, Laxman and Kumble leading to a new generation firmly taking control of its most dominant sport- Kohli, Pujara, Rahane, Ashwin and Jadeja- has been the Ahmedabad-born.

And during the 13 years of Parthiv being around Indian Cricket, wherein he’s often hopped from 22 yards at a Melbourne, Harare and, Christchurch to the indigenous carpeted surfaces for a Ranjhi and Vijay Trophy encounter, many promising careers cut their teeth in international cricket for India and faded away.

The likes of T. Dilshan, Ramnaresh Sarwan and, Jonathan Trott are now spectators who watch the game from sidelines, even as one of the contemporaries of their time is still seen- even though with rabid inconsistency- donning gloves and on a few occasions, opening a rare blitzkrieg for India through a willow that still seems pretty much in the thick of things.

From 2015 onward, Parthiv, who had lost his place right at the start of his career due to frequent sloppiness in his glove work, circa 2004 to Dinesh Karthik, has been belting runs at a domestic level with glee and newfound resurgence.

Scoring his first list-A hundred for Gujarat in their victorious run at the Vijay Hazare trophy in 2015 was followed by 4 fifties in Syed Mushtaq Ali T20 tournament, which was only bettered by a scintillating ton against India A in the Deodhar Trophy. At around this time, 2015-16 came mighty fifties and pummeling of the likes of Mitchell Johnson, R. Ashwin, Yuzvendra Chahal and Trent Boult in the IPL.

That said, one could argue that Parthiv’s long but modestly impressive run in Indian Cricket, wherein he’s not been able to surge past the 1000 run mark in either form has found an extended replenished chord thanks to the lofty emergence of T20s, a reality Cricket cannot seem to work in isolation of today even as ideas like disintegrating West Indies into separate national outfits is finding constant ground for discussion.

Here’s a stat that might bother Parthiv’s backers. The last he appeared for an ODI was in 2012. And it’s been 4 and a half years since India have picked a man who, given the current experience of many youngsters be hailed an ‘old guard’.

During this time, the careers of Shikhar Dhawan, who’ scored in excess of 3000 ODI runs since beginning in 2010 and one of the finds of Indian Cricket in recent times, KL Rahul, who debuted only as recently as 2016 took off with great aplomb. It also doesn’t help Parthiv’s cause that in Ajinkya Rahane, even though currently struggling to regroup with his inner calm and stoicism, India have a third dependable opening batsman that might consume the little albeit promising spark that Parthiv has on offer.

But all hope isn’t lost, is it?

With the leadership mantle of India, having moved from the icy-cool demeanour of Dhoni whose preferences seemingly never betrayed Raina and Jadeja to the firebrand but daring auspices of Virat Kohli, ever a friend of the youth and a believer in experience offer light to Parthiv? Perhaps, only time can tell. But if persisting with an Ashish Nehra, 38, is an indication, then Parthiv would rather hope his sitting padded up for the last couple of years or so would yield a reward for his patience and effort, the latter resulting in a brilliant 71 in India’s famous mauling of England at Chennai, 2016-end where Parthiv was last given a Test run. 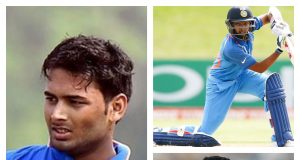 5 IPL Stars Who Are The Future Of Indian Team

Siddharth Sharma - June 4, 2018
0
Every IPL edition, we witness some young Indian players who perform great throughout the season when given the chance of...