Walt Disney’s quote, universally lauded for the motivation it serves, couldn’t spare a young Barbadian boy of its power, who dreamt of playing cricket for his country one day.

The boy turned out to be none other than Roston Chase, inarguably the most reliant batsman in current West Indian set-up.

In a brief career, along with Kraig Brathwaite and Darren Bravo, Chase has formed the core of the West Indian batting line-up. His value can be understood by the fact that he is hailed as the “go-to man” in a crisis, due to his ability to bail out the team in difficult positions.

Roston Lamar Chase was born in Christ Church Parish, Barbados when the likes of legends- Lara, Ambrose, Walsh and Chanderpaul- were fighting to contain the team’s spiral decline.

This was a time, when Caribbean youngsters were moving towards Basketball, seeing in the sport a lucrative stability.

Chase, however, was different.

Having already fallen in love with the great game, he was pushed by parents to move in the direction of pursuing a cherished passion; that of representing the West Indies one day.

His brother too mentored him.

A Big break and then- continued struggles

It was in February 2011, that Chase got his first big break when he played his maiden first-class match at Kensington Oval. In Barbados against Jamaica, he made 31 against a Jamaican pace attack including Jerome Taylor, impressing everyone with a calmness.

However, he couldn’t go further up then, after a failure in the second game against Guyana.

What followed was a painful wait for 2 years for the next chance. Average scores- only a 128 at a dismal 17.85 in 5 Matches weren’t encouraging.

It was a difficult time for him as the unsuccessful run in first four years at first-class level threatened a premature end of his career.

Luckily for Chase, the talent available in domestic cricket ensured he got another chance in 2014-15.

It was probably the last chance for him to show what he had and boy, didn’t he make a show of it

534 runs at 44.50, including a maiden hundred along with two fifties indicated true potential. His first hundred came against Windward Island; his bowling came handy as he picked 8 wickets at 29.87.

The season game him a much-needed confidence to establish himself as an all-around player.

Next season, he turned up better, stepping up his game- 710 runs at an average of 60, including 1 hundred and 6 fifties. Those 23 wickets came at a miserly bowling average of just 17.

In so doing, Roston Chase had arrived. The selectors demonstrated once, the sanity of picking the right guy against India.

On 21st July 2016, Roston Lamar Chase became the 307th Test player to represent West Indies. And in only his second game showed what he was made up of. After taking 5 wickets, he scored a magnificent century defying Indians a near certain Test victory- standing like a rock in desperate measures.

Early signs of the fighter in Chase

A magnificent, unbeaten 137 at Sabina Park, Kingston, Jamaica; an inning coming at the back of 6 hours was a knock that is regarded in terms of contributing to the sourness it bought India, a team known for making punching bags out of opponents in contemporary culture.

On Day 5 at Sabina Park, Chase dug a well of concentration through 137*, and saved West Indies who were almost certain to face an innings loss.

If India ran into the grit of Chase, who teamed up with Dowrich and Holder to hold West Indian fort, then in the just-concluded series against Pakistan, he demonstrated class along with grit.

Chase took no time to hit top gear, and produced a stylish 63 in the very first game.

Next, he would strike a top class hundred at his home ground, an inning that ensured West Indies were never out of the game.

His hundred was special one not only because it helped his team register a remarkable win coming way from behind. But for the presence of his parents and brother in the stands, who’ve soldiered on with him to reach his dream of playing at the highest level.

Moving on, Chase continued to excel and at the 3rd Test at Dominica when West Indies were staring at a likely defeat, produced what could be called the inning of his career, albeit one ending in a dubious loss.

With Dowrich gone and the team struggling at 6-93 in 43 overs, with another 53 overs to go, it almost seemed that the West Indies would succumb to another embarrassing loss. That, however, wasn’t what Chase had in mind.

He tried to forge a partnership on every wicket, playing 18 overs with Holder, 15 with Bishoo, 12 with Alzari Joseph and 7.4 overs with number 11 Shannon Gabriel.

Thus, indicating a keenness to fight on for the Windies.

During the process, he completed a hundred that showed the character of a cricketer who never gives up, regardless of the situation. West Indies lost the Test with just 6 balls left in the game as Yasir Shah cleaned up Gabriel, when all the Trinidadian needed to do was to have just fended of one ball.

On the other end, at this time was Roston Chase, standing gutted in disbelief but ever graceful in defeat. He was clearly a candidate you knew could see through the remaining 6 balls, as the West Indies fought long dragging Pakistan into the final over.

In so doing, Chase’ heroics made the game more enticing, the then-awaited result keenly followed and the eventual heartbreak stuffed with fodder for great discussion.

In Roston Chase, West Indies seem to have found a special talent and if one of the game’s most complicated cricketing boards can sort it out with Darren Bravo and Captain Jason Holder shifting at no. 6, West Indies will have top four batsmen accompanied in their top six.

As it stands currently, the Barbadian has achieved his dream of playing for his country. And the one thing that makes a solid cricketer a useful one, is that ability to hold on his own, as has Chase, against adversities. It is a fact that has earned him 2 vital hundreds; a dream for any Test Cricketer- and also a sense of responsibility that he seems to have accepted with glee. 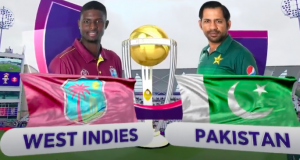 When West Indies Blunted Pakistan In Their 2019 World Cup Opener...

Dev Tyagi - May 31, 2021
0
What happens when you pit a raging bull against another? What is the outcome when you place two imposingly built musclemen inside a ring?...