It’s not always that the West Indies eye a clean-sweep.

But on June 6, 2017, they’ll possibly compete with the huge psychological advantage of pushing out visitors, Afghanistan from Warner Park at Basseterre, in the island paradise of Saint Kitts and Nevis.

Should West Indies whitewash Afghanistan 3-0, they’ll claim a rarity so profound in their Cricket that it might fill the driest of eyes with most watery expressions.

Cricket, after all, still values the essence of a great victory earned at home, over and above the shenanigans the game chooses to decorate itself with. Most noticeably, popular IPL outfit Gujarat Lion’s uniform- a Red jersey with blue shoes and orange batting pads. Furthermore, it adds unique value to a side whose fortunes are often as wilting as the constantly struggling economy of a third-world country.

And therefore, regardless of what critics make of West Indies’ victory vs Afghanistan, earned with the hosts nearly allowing their dainty tourists a chance to spoil their Caribbean party when Windies finally won the 2nd T20 by just 29 runs, they kept up with their patchy brilliance.

Patchy for victories have arrived of late for West Indies. A 5 wicket victory last year came vs Pakistan in the UAE, followed by a magnificent hammering of their hosts just a months ago at Barbados, followed finally by their series triumph over Afghans.

The West Indies suddenly looked a pumped up unit, given the return of old guards- Samuels and Simmons. But, what still hurt their fans was the sight of seeing no Pollard in any of the T20s -the batsman, now a Mumbai Indian, part- T20 fanatic but purely, – a behemoth who’s known to cause destruction at any stage of the game.

And somewhere, the ideal fan, one who doesn’t quite turn a blind eye on his sides’ weaknesses would find something unusual and wacky in what’s thus been a literally one-sided series, with another game to go at Basseterre.

That the Windies’ fielding lacks the urgency to effect run outs- at best- or contribute mightily in stopping the ball from crossing the boundary is a fact they must learn from watching highlights of Afghanistan, whose extra’s measure less when compared to their cheery hosts.

But even in the absence of Pollard’s useful T20 services, Windies managed to go over the line, thanks to some vital contributions stitched around Marlon Samuels’ consistent scoring, in addition to the likes of Evin Lewis and Chadwick Walton contributing through big heaves from the meat of the blade.

But was it just the batsmen?

Or could it be that bowlers such as new find- Kesrick Williams- who’ve already bagged 5 wickets from 2 games are beginning to gradually find their feet in a unit that seems to be thriving with youth.

That said, if unpredictability is the standard operating procedure of defining the West Indies, regardless of format; a popular notion that has been attributed to a side challenged against their ‘once mighty’ past- then a new form of change, it seems, stands on the horizon.

With the announcement of Cricket in the Caribbean being rebranded, thrust into a new identity under a governing and administrative body called Cricket West Indies- one can fathom efforts are being carved to reinforce some thought and lay the groundwork for the betterment of their Cricket.

In this regard, even if dainty victories, sans mighty yardsticks, such as a 10-wicket triumph or a win by dozens and dozens of runs do not surface, what matters most is that West Indies have still kept in their DNA- the idea of winning. Even if that comes at the behest of not exactly mauling Asghar Stanikzai’s 9th placed Afghanistan in ICC Trophy.

Talent such as a Narine and Badree are being discovered nurtured, among which an Ashley Nurse- handy off spinner, big hitting batsman is an indication. It could be argued that if Windies continue to find similar powers with contrasting abilities to a Nurse or Narine, then their Cricket can be revived from its current state of recuperating from a ventilator.

But that said, the exuberance of youth, is worthless if it’s not pitted against the wisdom of the experienced and in the case of the current woes, where there’s still no sign of a Gayle, Bravo cousins, Sammy- one’s dying to know if they’ve been moved out of the Cricket West Indies ambit on to another space?

What West Indies would like to learn from Afghanistan would be the temerity of their spinners; blessed with a natural flair to extract keen bounce. Gilbadin Naib and Amir Hamza, or it must be noted are fine exponents of spin under Mohd. Nabi’s tutelage.

So while in a few hours time, the sound of public amusement, may have a very West Indian construct to it, you’re going to see, maybe newer, Champions arise to the Fore.

And it won’t be that bad a practice since, practically, the next big mountain, rather a peak to climb for Carlos Brathwaite and Jason Holder’s men would be the famous Jungfrau of Cricket when Kohli’s men arrive on June 24. 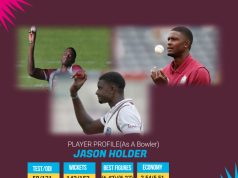 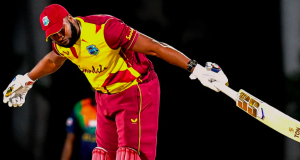 The Enigma That Is Kieron Pollard!