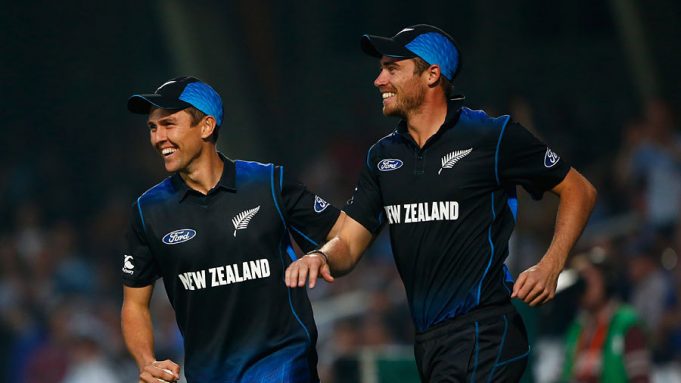 But despite having had the services of the great Richard Hadlee, Shane Bond, Chris Cairns, and Chris Martin, they lacked a pair that could come together and decimate an opposition until Trent Boult and Tim Southee arrived.

Southee and Boult have known one other from the time they were 14. Having played throughout different age groups helped them forge a bond in those early days where as teenagers, awe-inspiring moments were spurred by likes of Astle and Fleming.

Soon, a time came where Shane Bond entered the international arena and began taking the world by storm.

At around this time, Southee, who had matured into an ambitious fast bowler, having debuted for Northern Districts, circa Feb’2007, was waiting for that breakthrough.

And thus, 6 years after his compatriot Bond had debuted in international cricket, Southee’s big moment arrived in 2007, when he was taken to India by bowling coach Dayle Hadlee.

It was here that he met bowling icon Dennis Lillie, who termed him as a would-be Glenn McGrath.

3 months later, around March 2008 New Zealand found a new pacer, brimming with confidence, wearing the whites in earnest; oozing commitment for the side.

With Southee beginning his chequered journey that at 28, has miles to go, another Kiwi found his way to fly few years later.

At around 2012- Boult burst onto the international circuit for New Zealand. And in coming together of Southee and Boult, 3 years of the former breaking into the game, sparks began flying, timber began to get disturbed.

But most importantly, the two forged a strong camaraderie for one another.

Contributing immediately to a win, that too against arch rivals Australia, a first in 25 years, saw Boult and Southee scorch international cricketing headlines.

They would bowl superbly, a year later, against Sri Lanka.

After Brendon McCullum took over as captain, New Zealand reformed themselves going from being the ‘dark horses’ to rising as perennial- (check spelling) favourites who could cause a big upset.

With his chivalrous and daring attitude, Southee and Boult’s captain, McCullum inspired such confidence among his team-members that adulation came even from the enemy camp.

With the fast-bowlers lending efficacy to New Zealand’s bowling attack, the Kiwi bowling attack seemed to have found clarity of purpose and began making impressive headways.

New Zealand might have lost in their tour to the Caribbean in 2012, a series most remembered for Gayle’s comeback, wherein he punched a quick-fire 150 at Antigua, but the youngsters notched up quality bowling effort in a memorable Jamaica Test, wherein they picked 7 wickets amongst them on a pitch that hardly offered assistance to bowlers.

Next up was Pakistan. Boult and Southee squared an important series, defending Kiwis from a downfall.

But, fireworks would begin to explode when New Zealand reached World Cup 2015 finals. Almost unbeatable at home in 4 years in one day and major wins in test cricket NZ rose not only as a team in rankings but it broke many myths relating to NZ. During the course, Boult and Southee established themselves one of the most premier pairs in international cricket.

In over three years of McCullum’s reign, Southee and Boult pivotal contributor’s to New Zealand’s success.

In firing up batsmen with bouncers and finely executed yorkers, few were able to doubt the promise and pace of two of New Zealand’s emerging fast-bowling talents.

In the modern era, it is hard to find quality pacers. So finding these two was like casting Robert De Nero with Morgan Freeman in a movie, made to thrill and inspire audiences.

Thus, began a new tide of hope for New Zealand, who by now had begun to peg their fast bowling arsenal on the twin powers of their Kiwis.

The ICC Cricket World Cup 2015, New Zealand’s finest 50-over outing of late, was a blockbuster for Boult and Southee as due to their combining of biting pace and accuracy, New Zealand began flying the moment they arrived in largely, a home carnival and reached, unbelievably for some, the finals.

Southee took 15 wickets in the prestigious tournament including, a breathtakingly beautiful 7-33 against England, while Boult, who collected a brilliant 22 scalps, destroyed Australians in an Eden Park humdinger, with their batsmen ducking under cover in front of a lightening pace-attack.

But surprisingly, just when one had expected Southee and Boult to carry forward their brilliant World Cup form, they plummeted to a rather ordinary showing during the 2015-16 season.

But that is Cricket

You win some and on another day, another series, you bounce back.

Given their penchant for self-improvement and an incessant ability to combat with fitness and commitment, one sees the pace duo currently enjoying a good run in 50-over Cricket.

In 2017, thus far, the pair have performed decently, despite having not set the stage on fire.

Could their dip in form have contributed to a poor series loss against the Proteas? Fans would think, very much so.

But, what’ll be ideal for New Zealand, if they’re to entertain their idea of leaping ahead of other giant killers in the ongoing Champions Trophy would be to have these trailblazers of speed hit top form.

And, at the earliest- truth be told.

So that leaves us with a question.

Can Southee and Boult- pack a punch and step in when their country needs them most? Perhaps, being patient for now will help.

But maybe having already scalped 243 ODI wickets thus far, is pointing to an answer?