In the seventy two hours (and counting) that have passed since India’s shock loss to Sri Lanka, Champion’s Trophy has unfurled a vital lesson. Perhaps, thankfully adding to the ongoing ritual of rain interruptions:

That cricket is still very much a sport led by rabid uncertainty; a facet that appears most when one least expects it seems to be the mantra.

Other than that, the way India lost to Sri Lanka, something unprecedented to purists who didn’t see it coming only solidifies the current belief about the Champions Trophy being unpredictable. This is further evidenced by Pakistan’s 19 run win over South Africa.

But that said, just to prove, the game against Pakistan wasn’t a flash in the pan, the men in blue started their innings against Sri Lanka with their bats doing the talking.

Even then, only daft fans would’ve expected Team India to have not lost a wicket by the 24th over, with the score moving along steadily at 134.

Till then, India who batted with steady conviction seemed in utmost authority.

That is when Cricket presents a team in momentum with an edge.

India, who were scoring freely at almost 5.5 runs an over, knew they were going better.

Despite conditions being overcast, the ball wasn’t swinging much, which in turn helped Sharma and Shikhar pile up misery for Sri Lankan bowlers.

But most impressive amongst everything was the fashion in which their top-order got going; seems as if they were chilling in the middle. Setting up a camp.

Like lighting a born fire; there was that much chill in the middle.

By the time, Rohit Sharma was done, India were on cruise mode

That allowed Shikhar Dhawan to chill some more, with some breathtaking strokes.

Virat Kohli, who came and went without troubling the scorers, much to the disappointment of a large fan contingent from India.

But didn’t his and Yuvraj’s dismissal allow a Dhoni special down the order?

Dhoni came in and did what he does best, consolidate and in between put his shoulders to work with some power hitting.

Meanwhile, Shikhar Dhawan on the other end was playing an inning full of sublime timing and magnificent stroke play and brought up his 10th ODI hundred to take India to 321 runs in 50 overs.

Until now, in this Champions Trophy 2017, just how many team do you think would’ve chased down a 300 plus total?

Who knows? If Australia’s one of your options, then they’re on their way home. If you think South Africa, then well- look what Pakistan did to them?

Yet, when an inexperienced Sri Lankan team chases down the highest ever score in a Champions Trophy- you realize Cricket is not about the biggies dominating terms everytime.

And that hope isn’t lost for less punchier teams to punch above their weight.

”To restrict them to 321 for 6 on that wicket played out really well for us as on these wickets, despite there being grass, 310 or 320 is very much gettable,” added Sri Lankan skipper Angelo Mathews who scored an unbeaten 52 to lead his side to a stunning seven-wicket win.

That’s the thing about modern day ODI cricket. Isn’t it?

While in the 1990s, 300 was often unheard of, today as Cricket continues to build its presence on T20s’ cult- it stands as easily achievable.

Additionally, pacers have found it difficult to produce swing in this tournament so far.

But, at this time, India would like to revisit their bowling. How are teams mixing up their bowling make up? Why are we seeing more pacers over spinners?

While an Australia contested with Starc, only to perhaps daftly give Maxwell a chance when it might not have been the ideal idea, while Zampa was at the other end- did India get their combination wrong in not opting for Ashwin?

In hindsight, as Kohli put it, picking Ashwin would have been the obvious choice.

But come Sunday and it might pan out better for India as they take on an equally ailing South Africa.

There will be a Tahir squaring up against Ravichandran Ashwin, as will a Kumar and Yadav vis-à-vis Parnell and Morkel.

So as fans from either camps would expect one heck of a game, the squaring of bowlers against their might and surprise wins thus far have made the tournament rather exciting.

This is when the Duckworth and Lewis are still dictating terms from heavens. 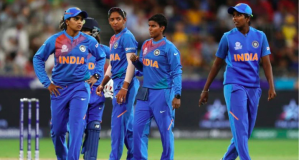 Shruti Banerjee - June 29, 2020
0
Indian Women's Cricket has seen a drastic change post-2017 ICC World Cup which not only witnessed an increased number of games but also in...