Adding further, “Jumbo’s contribution to Indian Cricket is undeniably great and much greater than Ramesh Powar’s and therefore, for whatever happened, I would like to offer my apologies to Anil Bhai,” Kohli was indignant at his behaviour, supposedly linked to the great leg spinner’s ouster from the post of Team India’s coach.

But how did this sudden transition happen?

Was Virat on magic mushrooms, fans wondered as did Kohli’s India team-mates, now squabbling in nervousness at BCCI’s headquarters, post their captain’s sudden change of heart where he offered a clean apology to Kumble whilst wearing a T-shirt of the Chinnaswamy stadium.

While the apology has come late in the day and might not be enough to get Kumble back amidst the Indian team, one suspects that Kumble might be back to doing what he did best in the final half of his career, when the bowled stopped turning sharply: clicking pictures.

It’s no longer a well-kept secret as to what made Virat re-examine his apparent bitterness toward Kumble’s style of coaching, that had led to the unspoken acrimony between the two.

Word’s out that upon Steve Smith’s advice, Kohli, who’s yet to accept the Aussie’s friend request on Facebook, decided to step away from touring West Indies and switched to Yoga instead.

But while Kohli’s well-wishers are sad that he might no longer be able to exude the quintessential loud and boisterous Delhi arsehat attitude, a recourse to Yoga, according to family and those close, will keep him in good stead.

“Who knows, he might be able to do a part like Raj Kumar Rao with newfound clarity in life and, may even do a film with me,” shared Anushka, smiling nervously.

But fans are sad at the same time.

No longer would we see, as previously presumed, Virat Kohli lifting Jason Holder over Queen’s Park Oval’s fence. No longer would there be verbatims between West Indians and Indian Captain, although needless, given the dainty power of India’s opponents.

No longer would we see the glorious chance of India thrusting West Indies under a summer storm, piling mountains of runs; say somewhere close to 450. Now that Kohli’s not there in the Caribbean and instead on an itchy Yoga mat- India might task Windies to chase the constant 400s or something; since on current form, the heavily bearded Kohli, was at best, managing no more than a 50.

But then, as Holder’s team breathes a sigh of relief, it is being reported that Kohli will be breathing in and out, focusing on Pranayama amidst the backdrop of cool and calm peaks of Dharamshala- the only place where Shane Watson and Michael Clarke were found bonding in their playing careers.

Was it the relaxed air of amicability?

Would you hold it to the idea of his Holiness, the Dalai Lama -who suggested Watto and Pup watch “Brokeback Mountain” during the tensest times in their journey?

We will never know.

But what’s known is that Virat Kohli, the man who seems ever capable of punching an opponent on the face as is Malinga of throwing instead of delivering a legal delivery, time’s right for making a fine lifestyle altering move.

Who knows, it might anoint the Aussies, once again, with the tag of being Cricket’s greatest sledgers ? 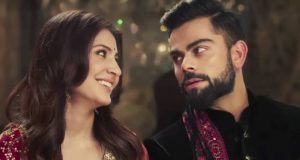 Yes, Thanks Much! I So Wanted To Know About Kohli’s Child’s...

Dev Tyagi - July 10, 2021
0
If you are aware of who Victor Trumper was, if you know Alec Bedser’s identical twin took to spin while the former aced medium...