When the 5-match India-West Indies ODI series was announced back in May this year, not many Indian fans were thrilled. Most were groaning outright for the boredom that they presumed awaited them. But discussing that openly might not be very wise, right? Despite there not being much to look forward to in what became yet another mundane ODI series between two dramatically uneven sides, a flicker of hope, however, appeared when it came to light that 19-year-old wicket-keeper batsman Rishabh Pant had been selected in the Indian squad.

If you haven’t heard the name already, he is this pocket dynamite from India who has been in news for a few months now for demonstrating his aggressive batting style and a penchant to score big runs. The spunky left-handed batsman caught the fancy of fans in this year’s IPL where he exhibited a brilliant range of strokes, that quite simply put, were pretty breathtaking. Implicit though, in Pant’s DNA, it seems, rests a cricketer, mature than his age.

That said, it isn’t just the IPL where Pant has excelled.

He was amongst the leading run scorers in the Ranji Trophy last season. 972 runs from 8 games; not too bad for a bloke who did really well in the 2016 Under-19 World Cup.

The ‘hype’ for Risabh Pant, therefore is genuine and the wait to see this supremely talented young cricketer wear the Indian jersey- justified.

For reasons that defy logic, Pant was refused a place in the Indian eleven in all five matches against the Windies; despite the fact that most Indian batsmen were seemingly jaded from a long season of cricket. This despite the fact that India was playing a No.9 ranked side that has fallen so far down an abyss that it looks unlikely they will ever emerge from it. Add to this the urgency India needs to show, which it perhaps isn’t at this time to build its bench strength for the 2019 World Cup.

The question is, how gutted must’ve Pant been seeing himself merely bench-warming?

Here is a young lad who looks certain to be one for the country’s future. He has that X-Factor with him and is being seen as the right replacement for the old warhorse MS Dhoni in limited overs cricket. Surely he deserved a dekko in a couple of games at least?

But? No. The Indian team management decided to plough along with a struggling middle-order and kept playing the boring brand of cricket that they appear to be very boastful about.

So after a not-so-impressive 3-1 victory against a horribly struggling unit, the Indian team showed a visage of confidence and a sense of achievement when the truth is that nothing of that note was attained by the side that left a future stars’ hope for debuting squandered.

In fact, more uncomfortable questions about the team were raised throughout; questions that are very likely to rear their ugly heads when better teams that the West Indies would face-off against India in a T20 that has Gayle’s mugshot written all over it for promoting a contest that looks like a no-brainer.

One wonders why aren’t young and talented players drafted into the playing eleven set up? While it is not necessarily a bad thing to stick with a certain bunch of players, it has to be argued that if a team has a monotonous feel to it with some evident struggles in its core, then isn’t it about time to that those who manage India looked beyond some ‘stars’?

Pant is no Tendulkar, but investing in him at his ripe age seems like an intelligent thing to do whilst one looks at the team’s future.

The last time Indian cricket invested in a young, left-handed wicket-keeper batsman- it did not yield productive results. We know that Parthiv Patel is nearly ODI history.

But Pant, armed with tremendous batting talent seems the guy who possesses the spunk of the modern cricketer.

Here’s another perspective. For someone who has done the bulk of his scoring on docile Indian pitches, it would have been interesting to see how he would have coped on the slow wickets in the West Indies. It would also have shown us if he had the makings to succeed Dhoni, in the near future.

But for that to happen, Dhoni would have had to be dropped for a few games. But one wonders how would’ve that affected the fans and purists?

He have little choice but to await another series where this youngster will be able to leave his imprint. The way things stand in Indian cricket at present, though, it looks unlikely that we will get to see Rishabh Pant get an extended run anytime soon.

So while all Indian cricket fans grumble and mope about this missed opportunity and scratch their heads about the relevancy of this tedious India-West ODI series, 19-year-old Indian Rishabh Pant must be wondering why was he given a free ticket to travel to the Caribbean islands.

The thing is, every time a young and exciting cricketer surfaces, there is bound to be some anticipation about him. With Rishabh Pant, it just feels like he has all the ingredients to become the next big thing.

All he needed was an opportunity. And that’s exactly what he wasn’t provided.

So even though Team India’s set up might think they do not need the services of Pant, their cricket – which seems to be eaten up with ennui at the moment – surely does. Doesn’t it? 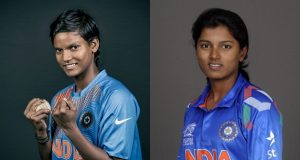 Dev Tyagi - May 15, 2017
0
An alluring question that often bogs the mind is should Cricket have a gender? Or, what gender might Cricket think of itself as having?...