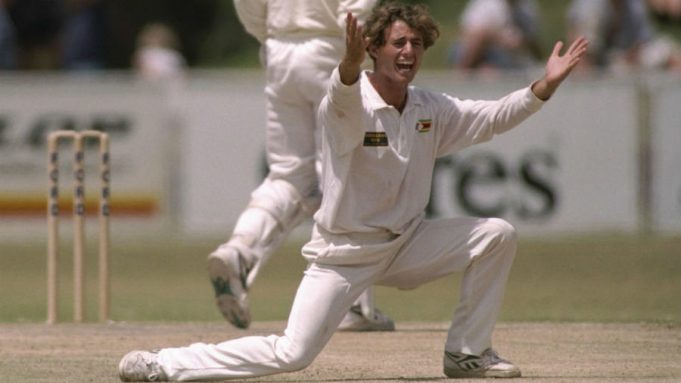 If there was ever a list compiled for identifying world’s least recognised cricketers- a species strangely unrecognised despite possessing talent then Zimbabwe’s Guy Whittall would make it.

Where does Guy Whittall stand in your list of the modern game’s all rounders?

What about the 1990s do you most remember?

Do you recollect the heydays of the Lara versus Sachin contest?

Is there a lump in the throat, as you recollect a McGrath steaming in upset Jack Kallis’s concentration?

In an era where Cricket’s fury was echoed by an unbridled passion for the game and its craftsmen and not verbatim- it was fun to have a bloke named Guy Whittall around.

Not a word was said after releasing the ball from a pleasantly hoppy action. There was no banter. At times, the ball would be pitched awkwardly short of good length, perhaps of the length of “little Kalu’s” frame.

But, it sparked a desire to curtail run rates. Guy Whittall lacked the sensational pull of bowlers like a McGrath, Pollock or Simon Doull.

He was the Michael Kasprowics of Zimbabwe. Staid, calm and driven.

Guy Whittal, who turned 45 on September 5, was in essence, the embodiment of Zimbabwean cricket of the 1990s.

Free. Exuberant. Bright. What else? Full of promise.

When Guy Whittall wasn’t involved in a mid-inning repair job where he pushed extra hard to accumulate 2s and 3s, he would club big shots over extra cover with glee.

Tendulkar and Jadeja didn’t destroy his medium pace. They preferred to nudge him around collecting easy runs. With that cute, medium pacy action, Guy Whittall was a seemingly harmless bloke who would chip in with usual breakthroughs.

There would be an smirk on the face.

Never about the shabby treatment Whittall’s team received from its board. Not about the condescension an Australia or Pakistan threw at a visibly weaker Zimbabwe he represented.

Rather, a call to the likes of Heath Streak or Grant Flower to tidy up the fielding where carelessness made batsmen’s life easy.

What mattered most to Guy Whittall wasn’t the tall ask of standing as an independent force in a team that had no dearth of any: Grant Flower, Alistair Campbell, Andy Flower, Eddo Brandes or, Paul Strang.

Rather, it was Whittall’s desire to keep a unit as isolated and united as West Indies- combined talents made of individual island entities-united, spirited.

A career marred by frequent run-ins with injuries, a life truncated by unexpected glitches in form and, all of this against the common template of Zimbabwean struggles and failings- Whittall persisted. Sadly, not for a very long time, having risen as an 8-year-old who struck magnificent hundreds at school-level cricket in his native, Manicaland.

For a young man to debut in first-class cricket at the ripe young age of 18 to progress to serious, international cricket a few months later, even Pakistan didn’t see Whittall’s glorious hundred coming.

But Harare saw a sensational, fighting hundred that culminated in one of Zimbabwe’s finest victories in a city famous for soft stone carvings.

While the career of Guy Whittall, prospered no more than 46 Test appearances, he exhibited some swatting of the bat to produce 2200 plus runs at an average of 30, with a highest score of an unbeaten 203.

While his list of injuries often bore resemblances to a blind date with mishaps- knee, calf and, shoulder troubles finding in Whittall- an oddball romance- the Zimbabwean couldn’t be dissuaded to finish with a very descent bowling gatherings of 88 ODI scalps with best figures of 4/35.

Even if the final row in the Guy Whittall career block depicts an economy rate of 5.1, there are few limited overs bowlers around today who have stellar economical rates.

But Cricket in the bygone era was far simpler, wasn’t it?

A bit unlike Whittall’s flowing locks that painted him as a fellow strewn straight out of a an uber cool lad’s dating manual.

Not that match-fixing hadn’t arrived in then. We saw the Hansie episode. The world woke up to the Azhar fiasco. But, above all- a sense of utter resilience minus the contemporary era’s self-marketing hype governed our cricketers.

Evidence is ripe in Guy Whittall’s 2 fifties apiece versus the brute bowling machineries of the 1990s West Indies and New Zealand. Remember Curtly and Walsh?

Remember the man with the famous mic in hand: Danny Morrison?

Guy Whittall also shared a staggering batting average of nearly 80 against Bangladesh- the same (then) minnows against whom blokes like Nathan Astle, Shiv Chanderpaul and, Saurav Ganguly often struggled to get going.

But Cricket has often undone itself in being an arrogant sport: a turf where there’s less credit reserved for the shyly talking or coyly smiling bloke who gets the job done.

Not so much though for the “dudes” who can inspire neanderthals to return to the popping crease. ‘Guy Whittall wasn’t star value. He wasn’t a 22 carat gold cricketer.

He was just himself: a lower-middle inning six-hitter, four-carver and run accumulator, who jumped, hopped and smiled. And, lent useful services toward mega events such as Zimbabwe’s famous 1999, 2003 World Cup campaigns- without much ado.

Interestingly, it’s the same Guy Whittall that we see in a famous viral video that shows a crocodile paying the former Zimbabwean a visit. That too in his bedroom.

Must be hard, isn’t it to be remembered by an aquatic lizard and not by cricket’s paraphernalia that once quoted Whittall as one of the game’s finest all-round, driven talents. 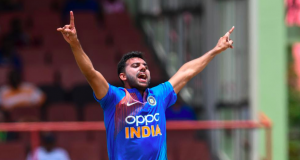 Deepak Chahar- The White-Ball Specialist From Agra With An Irreplaceable Craft!