For someone who has seen his father , his own role-model commit suicide, life hasn’t been particularly kind for Jonny Bairstow.

Then, losing his grand father, days before one of his best Test innings came about at Lord’s, that indomitable, unbeaten 167 against Sri Lanka meant that Jonny Bairstow has had to contend with cricketing milestones running in parallel with personal tragedies.

But to endure is one thing. To carry on, regardless, is something quite another.

With Ben Stokes, Moeen Ali  for company, the solidity lent by Jonny Bairstow makes England a side with a formidable middle and lower batting order. England’s number 6,7 and 8 have become a major source of success in recent times despite the top order continuing to grapple with constant reshuffles, where three of the 5 places often go up for grabs with the team having to choose between a Sam Billings, Joss Buttler and Jason Roy.

In a side where there’s hardly any dearth of talent, consistency and holding on to one’s place accounts for maximum impact. In this regard, Jonny Bairstow, who’s now no longer just an agile jumper, bail remover from behind the wicket has begun contributing vehemently from the that. If you recollect 2016, then through three of the finest Test hundreds that an English keeper’s produced in the past- Bairstow gave scorers quite some work to do. Against Faf’s home team, the West Yorkshireman produced a scintillating unbeaten 150 at Newlands.

Bairstow would follow up on his incredible 140 at Leeds against Sri Lanka in May 2016 with another incredible effort; a free-flowing 167 in a space of two weeks. This effort, however would be a belter at Lord’s under what weren’t exactly ideal batting conditions.

However, when it comes to drawing a narrative about Bairstow’s life, little does the world consider about the challenges this earnest lad has faced. Never with a grin; always with quintessential English cheer. Born in one of the most famous families of Yorkshire, Bairstow’s father -David Bairstow- was a famous wicket-keeping batsman for Yorkshire. Though, David had to struggle a lot financially after retirement , the stress forced him to commit suicide. It would be an instance that would mar little Jonny when he was all of 8.

At around this time, it didn’t help much that Bairstow’s mother had gotten the cancer. So while left kept crawling up on him with gobsmacking challenges, our man kept coming back. Undeterred. Undefeated. On the other hand, an ambition to become an international cricketer had already birthed in Jonny’s heart.

At 14, he was playing for St. Peter’s First XI with boys two years older than him. It probably was one of the main reasons why he was nicknamed Ron Weasley, a Harry Porter Character. However, do you find an uncanny resemblance? Bairstow would soon, come closer to realising his ultimate ambition and in playing quality cricket in 2009, he was contracted by Yorkshire .

This was a chance he knew would form a bridge to reach the English national side and Jonny hardly had any plans of getting carried away.

In his first two years for Yorkshire, in spite of cracking 17 fifties in just 34 matches, Bairstow failed to get a hundred . In 2011 , however, he notched up his first ton, that became even more special since he had Ryan Sidebottom at the other hand.

Bairstow and Sidebottom’s fathers were friends and Jonny always took inspiration from Sidebottom and even became a mentor for Sidebottom’s son .

In 2012 , at last, Jonny Bairstow got the long-awaited, much anticipated England call.

He played his First test and scored a gritty 95 against the likes of Dale Steyn, Vernon Philander and Morne Morkel.  The innings showed his class, however, with Matt Prior being fit he couldn’t cement a place in first year.

In 2013, during the Ashes, Bairstow received a call to replace Prior but instead of it proving to be a boon it would spell disaster for Jonny as a humiliating whitewash Down Under threatened to end glorious careers that had happened before Jonny came about, thankfully, not lately.

He couldn’t make to the team for next 18 months but during this period, he kept on churning runs for Yorkshire, for whom he not only amassed 1108 runs at almost a 93 while keeping wickets but also helped them secure the Championship title in 2015.

The same year when England, after their horrid World Cup run were looking for some fresh faces to change the dynamics of their cricket, Bairstow came along and was considered for his unrelenting commitment to a side hunting for stability. Fans would see immediate results of his picking against New Zealand.

Despite not being a first choice keeper, Buttler, now fit got back in the fold. Did it deter Jonny? What might have been Bairstow’s thoughts at this time, who’s to know? It was only when Buttler struggled in UAE against Pakistan in 2015-16 tour, a time where he could hardly put bat to ball that Bairstow was drafted in.

A couple of months later, he arguably played one of his finest innings thus far. At Newlands against South Africa, the legendary English grit was on full display. With mum Janet and sister Becky witnessing their son’s glorious moment- it was a special moment. Even, surreal. That said, in the months that followed, Jonny would be the agility in motion from behind the stumps and a handy customer with the bat in front.

Today, Bairstow, who is all of 28 has several cricketing summers ahead of him. His journey, one notes could be an exciting time especially for an England side working toward claiming the top shots in international cricket at a time where a Kane Williamson-powered New Zealand and Kohli-powered India are creating lots of buzz.

Ian Dews , Yorkshire’s director of cricket development appreciates Bairstow saying he has always taken time to get in at every level of Cricket but when he does so he dominates. He is satisfied that at last he is getting his dues. Probably yes life hasn’t been too sweet for him but Bairstow is a man who seems to be able to make the most of the chances he gets. Of late, Bairstow has formed the backbone of the English batting side, a unite that balances its weight on some mesmeric talents. It’s all happening here and Jonny’s sojourn has just begun.

He now ventures on another challenging assignment Down Under to save the Urn . Can he deliver again ? Going by Hollywood standards, it might not exactly be a Sweet November for either of the Ashes sides. 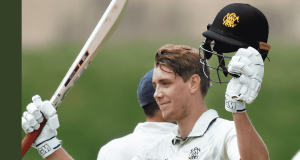