Cricket is known to reward perseverance highly. In what ultimately pans out as a tug of war between the bat and ball, is at a psychological level, a warfare involving the mind.

Even when the body tires out, battling immensity of pain, you soldier on.

But you can be pardoned for thinking its only batsmen who brave physical wear and tear. After all, some of cricket’s bravest vignettes of anxiety-inducing nostalgia showcase batsmen withstanding immensity of harshness.

It’s not difficult to recount Dravid continuing despite his jaw being hammered against Bangladesh. It was 2010 as Chittagong came down heavy on the Wall.

It isn’t uncommon to remember Graeme Smith coming out to bat, his backhand, and barely able to function, let alone cushion the forehand from the blitzkrieg of Johnson. Remember Sydney, 2009?

The chances of forgetting Malcolm Marshall playing the one hand bandit in July 1984 is akin to forgetting the number of times West Indies lifted the world cup. 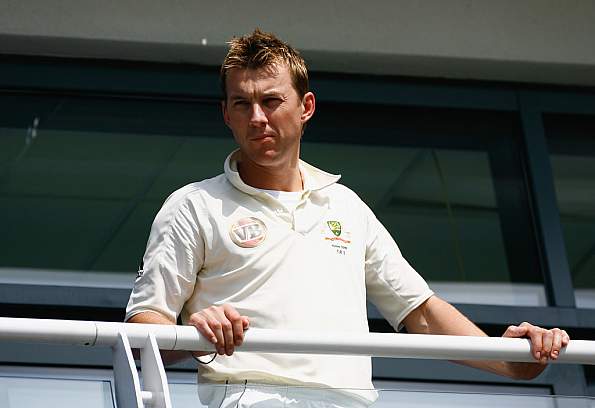 But what about the sight of a painful Brett Lee, sauntering back to the run up, puckered by a muscle tear in the groin or hampered by a blow to the elbow?

To Brett Lee, arguably an eye-pleasing mortal equivalent of a bullet fired from point blank range, injuries came knocking surprisingly and rather, rapidly. Where most fast bowlers carried aches or bruises, contended with injuries perhaps of the size of a trench, Lee battled a reservoir of agonising discomfort.

It was uncommon to hear of a fast bowler being sidelined in less than a year of making his Test debut before Brett Lee attached his blonde, dove-eyed, persona to the recurring phenomenon.

Continuing to excel despite pain. Repetitively making his pace scream louder than manic, crazed fans. It was evident in his thrilling exploits at the Lord’s of 2005. England wouldn’t want to remember their egregious batting display as Lee scuttled past the defenses of stars like Pietersen and Flintoff.

Nor would they want to act anymore other than immediately shutting down a Youtube clip laying bare their evident discomfort against Lee in 2009 who played scarecrow to exploit the weaknesses of blokes like Matt Prior, Luke Wright and, Paul Collingwood. 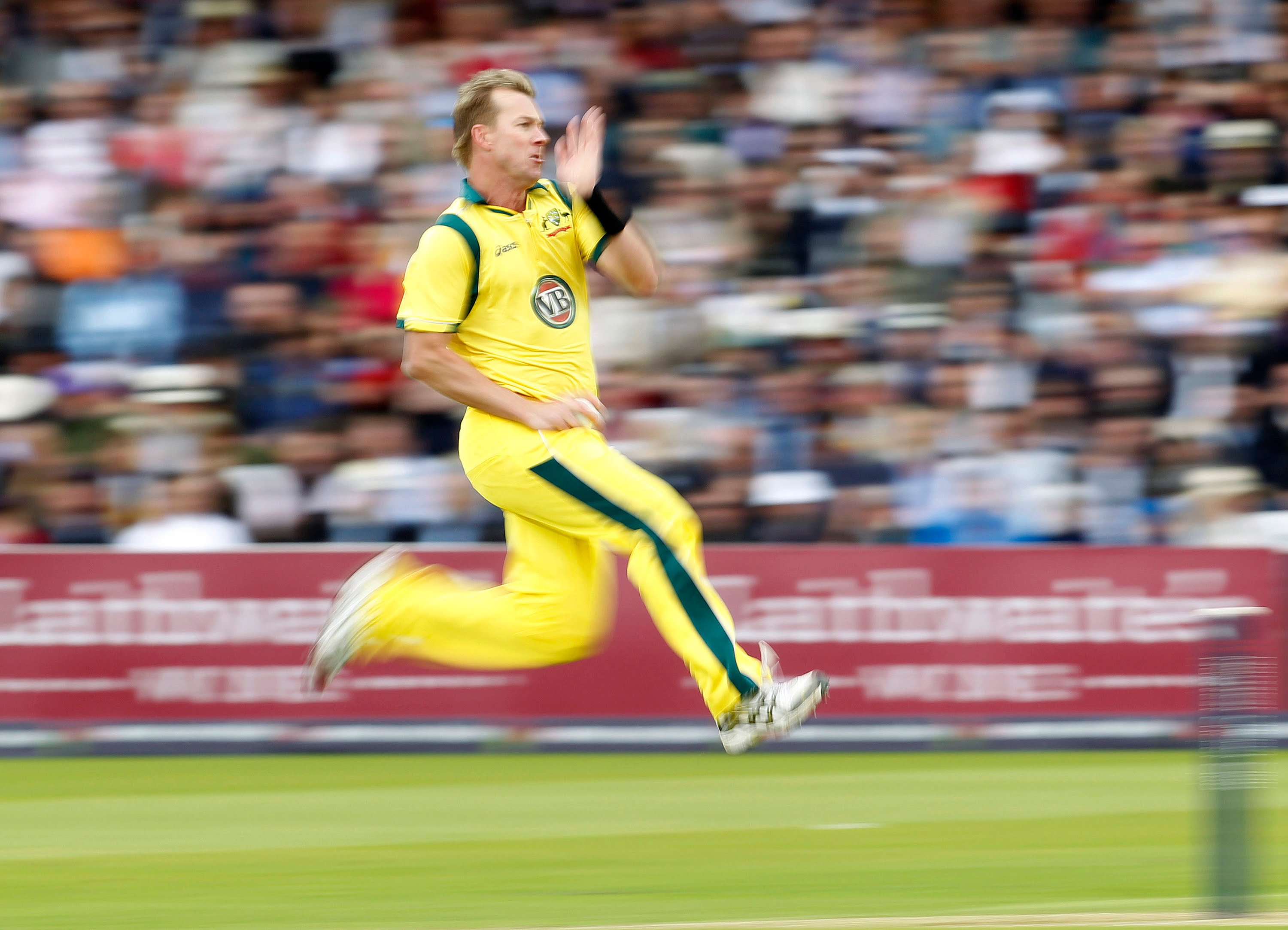 In a career, where Brett Lee defended himself from tendon aches, stress fractures and blows to his elbows with a bit more daring and style than those who failed to defend their stumps from his scorchers, a bigger draw over his 690 International wickets, one could argue, could well be the duration for which he played.

Always sporting a smile; seldom with a grin.

Lee excelled in honing his craft against some of the most talismanic blades of their time- Lara, Kallis, Sachin, Sangakkara, Younis Khan. He believed in being the glue that got Australia on its feet not in furthering theatrics, a facet Cricket’s amphitheater often plays a willing host to. 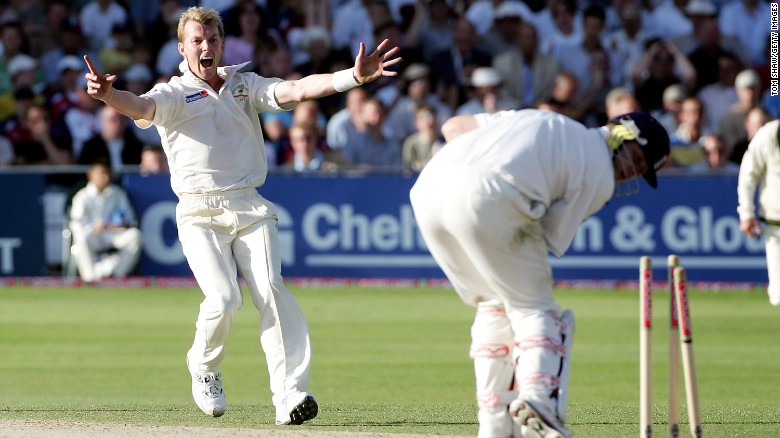 In an age that was all about Glenn McGrath’s disciplined line and length and a fiery ensemble of stellar bowling elite comprising of fast bowlers who hunted in pairs- Donald and Pollock, Walsh and Ambrose- Brett Lee made the art of fast bowling fashionable.

Lee, it could be said, harvested a new culture of fast bowling, one besotted by high octane action, thumping celebrations, jeering of batsmen by wide eyed smiles and the smashing of the green surface replete with grass and cracks in the wake of fall of an unprecedented wicket.

While most would credit Brett Lee for blazing the trail that many would want to follow; for climbing the rare and distinguished feat of 300 Test wickets, , the 41-year-old must be hailed for something more.

Fast bowlers, it is often lamented, are easily enraged. 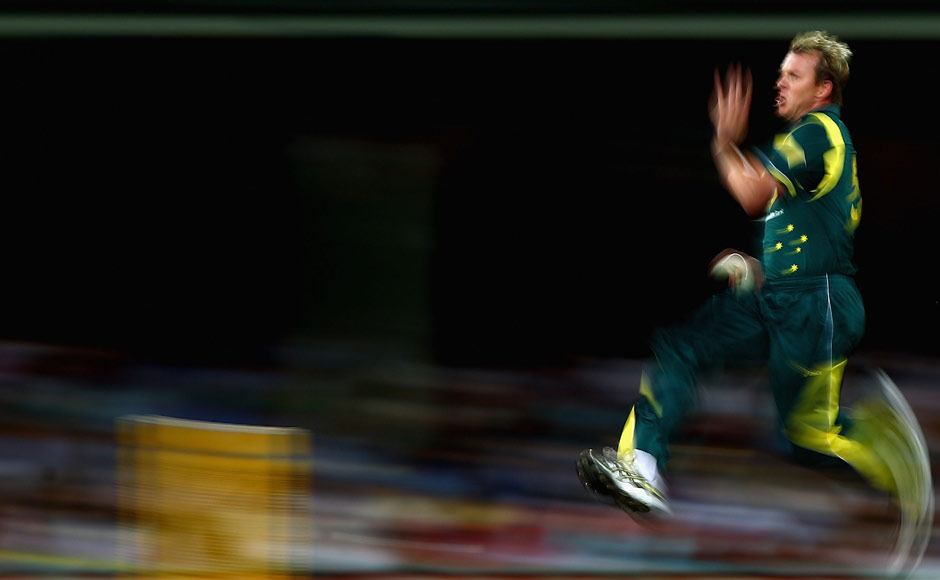 The excesses of competition have often made a Dale Steyn fire down some blazing pace or disgruntled Mitchell Johnson when he hurled back the ball at Kohli, perhaps in sheer frustration.

But during Lee’s time, where red-ball cricket dominated chart-topping T20 leagues, that’ve mushroomed akin to unruly forest fires, Cricket was about comforting an opponent and speaking to a skilled adversary upon witnessing a heartbreaking loss.

Can you picture the Commonwealth Bank Series of 2012 where Lee immediately ran to offer an apology to Sachin having hit his helmet?

Do you remember a compassionate Flintoff sitting down with Brett Lee, already on his feet, having witnessed a painful loss by the margin of just 2 mean runs?

Brett Lee’s enigma isn’t attuned to his high-paced exploits with the seam alone. 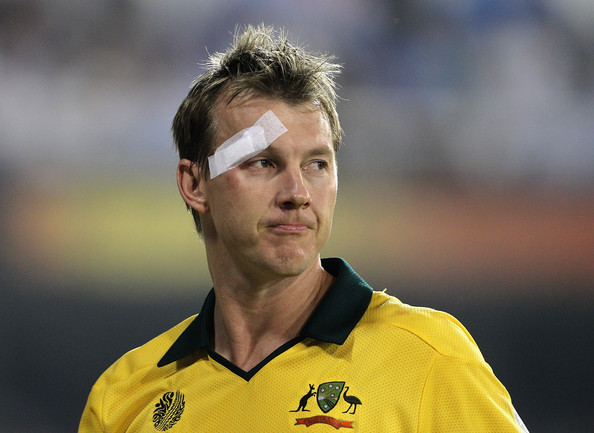 It’s Lee’s charisma, personality and ability to fight fire-with-fire, an elaborate instance of which he demonstrated in the ICC World Cup 2011 in Australia’s fighting loss to India that warrant a case for greater celebration of his legend.

In diving across the outfield in a vain attempt to stop a Yuvraj Singh boundary, Lee managed to get a hand to the ball but couldn’t stop it from hurling his eyebrow.

At 35, Lee was well beyond his peak powers but in scalping a vital wicket of Dhoni and finishing with 8.4-45-1, he was about economical as any Aussie got at Ahmedabad.

Where most competitors dare about taking a beating or slashing for their teams, Lee was willing to embrace physical hits. 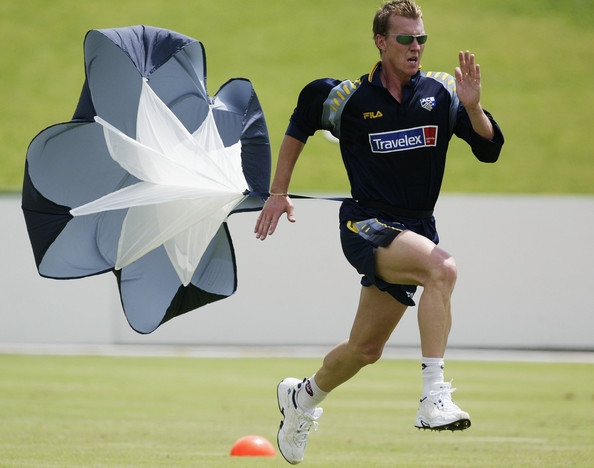 Whether it was him going down on his knees in sending expertly gathered returns to Gilchrist during his 5-59 at Antigua or his giving videographers the most spectacular shot from the 2003 World Cup as a young, brooding tear away blistering across Potchefstroom with a parachute tied to his waste in an emphatic display of skill and athleticism- there was an energy, an emotion about Brett Lee. 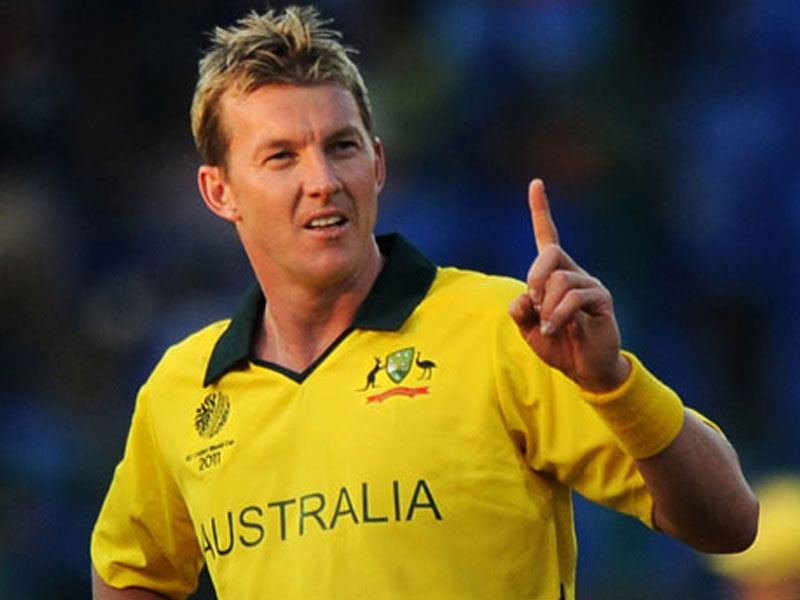 But beyond his superb 380 ODI wickets and massively inspiring feats such as tricking the Bangladeshis in ICC World T20 2007 to style the formats’ maiden hat-trick, Lee must be thanked for playing the sport with the same passion with which he advocates it, nearly half a decade into his retirement.

Implicit in Lee’s furious, gun-up to the wicket action was the role of a youthful extravagance that attracted him to the attention of the opposite sex. In an age where cricket often produced a ramp walker over the weekends or an exuberant idol for charities and fundraisers, Brett Lee was a big budget hit; his fast-paced cannons tinkering the 150- 150 plus speed barrier and his musical talent affording him legions of globetrotting fans. 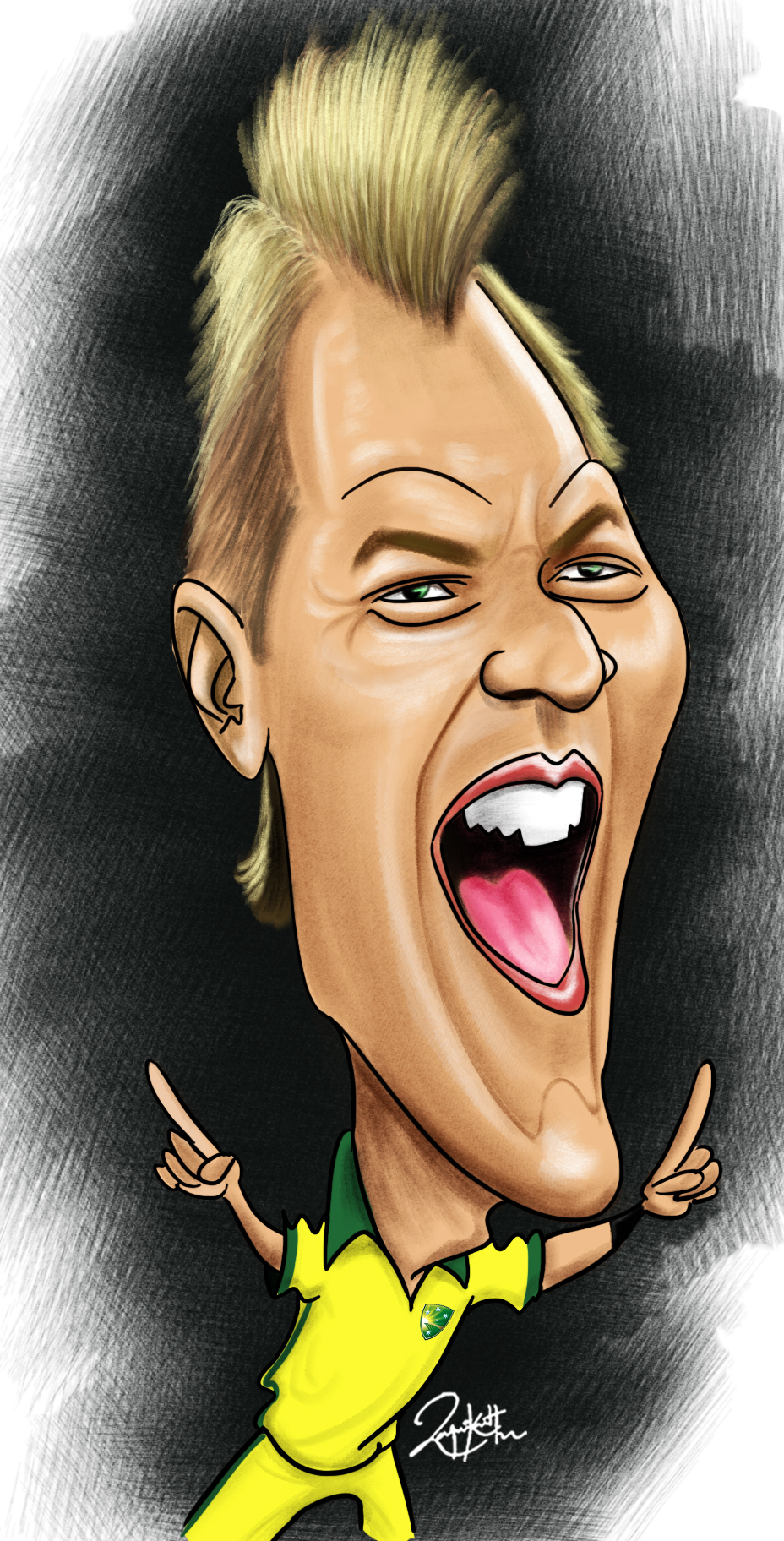 And in these polarised depictions sparkles the legend of Brett Lee; an utterly devoted competitor, a fiery adversary who revolutionised the exponent of fast bowling. 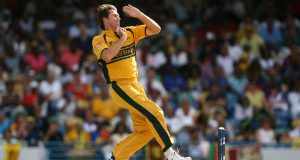 Line And Length: A Tribute To Glenn McGrath

Abhinav Bose - February 9, 2018
0
Nairobi, 2000. India are taking on a dominant Aussie side in a high-voltage virtual quarter Final at the ICC Knockout Trophy under the leadership of...