For a team that is currently languishing at the bottom of the ICC ODI and Test rankings, a respite from defeat is both rare and hard to find. But problems for the West Indies are more than just a staggering rise in their failings at both home and on overseas tours.

With Gayle, already 38, often contesting with a soar back and old guards like Samuels, Sammy or Pollard hardly featuring in any playing eleven, the onus remains on the youth. Amidst times where a victory is either earned by a Shai Hope or Roston Chase special- the duo having only just broken teeth in international cricket- it pays to have an Evin Lewis in the middle.

From a traditional standpoint, the West Indians aren’t regarded for possessing technical proficiency. Neither are they hailed for displaying humungous amounts of patience. The days of Lara and Shiv Chanderpaul are long gone.

You regard the West Indians for exhibiting power; for dismantling attacks through voracious hitting. Evin Lewis- who’s just turned 26- is perhaps the latest signatory to this no-holds barred style of West Indian batting; a legacy first established by the great Viv Richards, echoed only too briefly by Ricardo Powell, carried forward by Chris Gayle and now seemingly resting in the grasp of the Trinidadian batting sensation.

While his career may be all too brief, having only debuted just an year back, the powerful left-hander has caught the attention of the contemporary cricketing culture; one where performances in cricket’s briefest format often lead to a national call-up and where audiences behold breathtaking power-hitting for just over four hours or so, holding popcorn and beer cans in stadiums where their need for instant gratification is amplified by last ball victories or final over heartbreaks.

Though Lewis first turned heads courtesy his sensational 49-ball 100 against India at Fort Lauderdale in Florida (July’16), he quickly ran into promising scores to prove he wasn’t just a one innings wonder. Earlier this year, Evin Lewis justified his selection as a T20 opener alongside his mentor- Gayle- when he blasted a career best 125 against Virat Kohli’s India in a one-off T20 played at Jamaica in July and followed it up with a quickfire 28-ball 51 against England in a one-off T20 held in September.

In either innings, fans were moved to the edge of their seats as Lewis quickly outscored and heavily outnumbered arguably T20 Cricket’s finest exponent of grandiose hitting: Chris Gayle. How often have we seen an attack featuring a Liam Plunkett and Ben Stokes or Bhuvaneshwar Kumar, Kuldeep Yadav, Ravichandran Ashwin being heaved for over 5 sixes in an inning?

To be fair to Evin Lewis, he’s clearly not a pinch hitter. Nor is he just a one-dimensional, no-nonsense ball crusher. While his natural stroke-play- checkered by big blows from the meat of the blade, orchestrated by strong bottom hand play and punctuated by the rare ability to find gaps on either sides- funnily threatens his craft to be constricted within the confines of T20- the Trinidadian is a capable ODI player. Having already notched up 2 ODI hundreds, bursting on the international stage with a memorable 148 against Sri Lanka at Bulawayo, Lewis indicated there’s more to his game than just ostentatious and outright takedown of bowlers, an avid indication of which was served to England as he retired hurt on 176 a few months earlier.

That he can play the patient game and block good deliveries from reaching his timber was evident as he looked set to reach a memorable double ton as England tried everyone from Jake Ball, to Liam Plunkett, Moeen Alil and Adil Rashid but failed to contain Lewis’ onslaught. In the end a calf strain cut short his splendid London effort.

But die-hard fans who can’t be blamed for being slightly irrational in wanting Evin Lewis in the Test unit would wish for the leftie to abstain from playing a lofty airy stroke one too many; a phenomenon that has often cut short his brisk but promising starts. As the West Indies stand on the knife’s edge, perhaps looking frailer than a shadow enveloped by the dark in contesting for a final World Cup spot, they’ll look to outdo popular imagination in forthcoming ODI ties in 2018.

If not for those magnificent hundreds by Hope and Chase in 2017 that earned them plaudits at Dominica and Headingly, they’ll draw inspiration from Lewis’ commanding efforts at London and Jamaica. The impetus, though, lies with Lewis to transform his game from being an unabashed ball smasher into being a consistent driver of runs from the very top of the order. 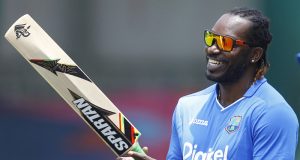