It has been a rollercoaster ride for India’s premier spinner; one praised for his success and riled for his failure to perform in alien conditions. Ravichandaran Ashwin has scaled the peak which no other cricketer has achieved in history of the game, that of being the quickest to reach the 300 wickets club.

Adelaide 2014.  India was battling out in an enthralling Test against Australia. However, at nets two eyes were searching for answers of questions consistently thrown at them. It was none other than India’s premier spinner Ravichandran Ashwin. Ashwin was dropped by stand-in captain Kohli in favour of a raw talent- Karn Sharma. It was the seventh time in last nine tests that the offie was omitted from the team. Although, a big reason of disappointment was Ashwin being clueless about his failures.

Why wasn’t he picking wickets? Was his craft that bad that it deserved omission?

The great Martin Crowe once said “The moments of disappointments are the moments of wisdom, when we learn most.”

It was during such lean spells that Don Bradman advised Greg Chappell to change his grip and Sunil Gavaskar suggested Martin Crowe to rest his head against a wall. Similarly, Steven Waugh omitting the hook from his play book and Terry Jenner advised Warne who had just undergone a surgery to bowl with a more pronounced round arm action.

During the testing period, Ashwin worked on his bowling action with coach B Arun . The problem was persisting from long time but it was only in Adelaide that Ashwin could identify any plausible pitfalls with help of Arun. Arun identified that the way he was setting up for the bowling demanded change. He had been involving immense load both with his bowling and non bowling arms prior to the delivery stride . His feet were aligned towards the fine leg and arm was slanted beyond vertical in a somewhat 1 O’ clock position.

The position restricted the spinner’s drift and when he used to finish his action, his follow through pulled him towards cover rather than the pitch. Was he needlessly overworking himself? Perhaps yes.

Arun worked on this and removed these glitches. Now Ashwin’s feet are aligned towards the batsmen; his right hand being close to the shoulder and arms perfectly vertical making an ideal 12. You can note he now finishes on the pitch and is able to get more drift.

So has this changed things?

The result has started to reflect in his performances , since June 2015. He has played 31 tests and has snapped a staggering 185 wickets at an astonishingly miserly average of 22. There’s 17 five-for’s in it. During the period he has snapped 60 wickets in 11 Tests outside India with an average that is better than home grounds.

Today, Ashwin is not only a potent threat to offset batsmen’s rhythm, but has rather emerged as a thinking cricketer, who relies on clever variations and is unafraid to flight it up every now and then.

After troubling Kumar Sangakkara in his farewell series , where he priced up the celebrated southpaw on four occasions in four innings, he opened up the box of secrets telling how he had studied Sangakkara’s game. The mild-mannered spinner shared, “ He’s been lbw very few times to an off-spinner. It suggested to me that he’s actually looking to play for the balls that are hitting his pads, and that is what is happening almost all through international cricket. The spinners are getting wickets hitting the pads on the front foot, because umpires are willing to give it out”.

When Ashwin became the quickest to take 300 wickets, he only smiled in reply of the accolades presented to him for inspite of the success he’s garnered over the years , he has also endured criticism for triumph on turners.

Even predecessor- and one of India’s finest- Harbhajan Singh said that the kind of wickets India were playing were not particularly good wickets and that had he and Kumble played on them they would have finished with 1000 wickets.

But conjecture has little to do with real stats

Ashwin is a mentally tough nut to crack. When he is not taking wickets, he builds pressure on the opposition which has helped others to reap the rewards. Be it against England at Vishakhapatnam in 2016 or against Australia at Ranchi in 2017- he contributed to the downfall of the opposition.

Inspite of all his grandiose success, Ashwin still knows that his achievements are fragmentary until they are connected with glory in England, Australia, South Africa and New Zealand- challenges that India have hardly challenged itself against except for home conditions.

Against these top notch sides, Ashwin hasn’t been the pick of India’s bowlers- picking only 24 wickets in 9 tests at 56.58. Is that really him, fans wonder?

While there’s little doubt about his technique and mental fortitude, real success will be determined in the next 18 months that’ll determine his place in spectrum of greatness. While he has conjured tons of statistics , it might be a fitting time to now earn in terms of character. 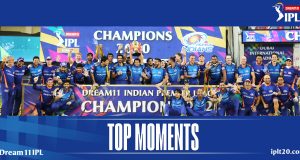 Which Were The Most Memorable Moments Of The Just-Concluded IPL?

Balaji - November 11, 2020
0
Crickets fans should be forever grateful to the BCCI for organising the best cricket competition amidst so much uncertainties which has made people to...