Every team is, for all intents and purposes, a strong force in its own backyard. South Africa were never going to be that easy to conquer. But the team that Virat Kohli took to Cape Town wasn’t just any team either.

But in the end, you could say, the better team won.

Only in this case, the team that prevailed had a profound experience of playing in conditions that stood in stark contrast to India’s flat-decks.

It could be said Cape Town’s plush green pitch took the colour off Virat Kohli’s unit- a tad bit unprepared when one takes into consideration that prior to entering the First Test- Kohli’s boys had only hit a few sessions in the net.

Where were the practice games- ever an essential part of an important away series- on the tour to South Africa?

Add to this the perspective offered by the great Sunny Gavaskar. Sunny rightfully said that there is no substitute for local conditions where one is provided with adequate match practice which prepares one for alien conditions- which in this case were in direct contrast to India’s sub-continental climate.

Were Kohli’s team done in by an absolute lack of awareness as to what was to follow?

The likes of Dhawan, Pujara, Vijay and captain Kohli had contested at the back of tons of runs and the talent but it could be said, not the greatest match awareness that a bouncy, swinging track at Cape Town offered.

Add to that Morkel’s height and the discomforting pace at which balls rush in akin to bullets being bludgeoned; an onerous task that is difficult to manoeuvre if one lacks in adequate exposure to local conditions.

That we’ve hardly seen a bowler with 130 k/hr in tank run down an opposition like ninepins was the key highlight of South Africa’s dominance of India.

It could be said tackling brute pace of a Steyn is still slightly manageable but it is the sheer unpredictability of a medium pacer like Philander, assisted by the pitch on the fourth day that stands the risk of troubling visitors.

Much to India’s despise, this is what exactly happened. But all is not lost. Great teams, jolted by suddenness have often risen like a sleeping giant.

There are two more Tests to play. Even as South Africa have drawn first blood, Indians by now have got an idea how it’s going to be all seam versus bat from now on. Rather, make it temperament plus skill, a bright example of which one saw in De Villiers and Pandya’s first inning effort.

But how well will Kohli’s men take their first test hammering, one can’t say. Of course, the biggest breakthrough- which shouldn’t be ignored- is that Kumar and co. were able to subdue South Africa for a 135. Would Kohli have predicted something like that? 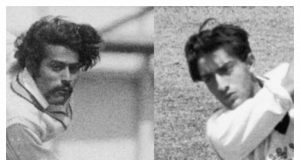 When India Nearly Became The Second Team To Win After Conceding...