In an era swarmed by alluring surnames like Kitchen, Hope and, Dickwella, the name Sidebottom offers a fitting throwback to an era where left-handed fast bowlers with uncombed hair represented English Cricket. Ryan Sidebottom- who’s turned 40 today- was a compelling cricketer.

Quite like a Sulieman Benn for the West Indies or an Ahmad Shehzad for Pakistan. 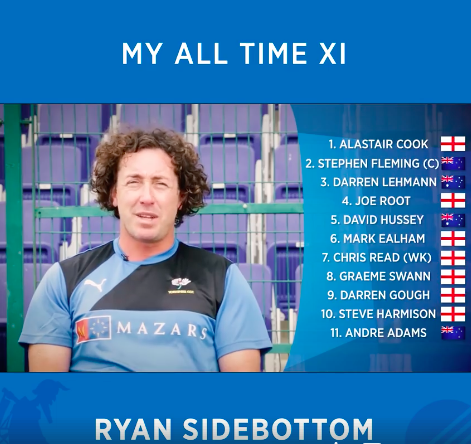 It was more than his intriguing surname that catapulted him to the world’s attention. Had you been a Picasso, you’d be instantly compelled to draw it and somehow analyse how that piece of art happened to Cricket?

It wasn’t always that fans got to see a bowler who stretched pretty much the proportion of an entire fitness session, each time he came to bowl and eventually delivered a scorcher about the pace the fastest that Ashwin bowls.

With his broad shoulders, brooding masculinity and wide smile, Sidebottom, who turned down the titular role in The Legend of Tarzan to giving cricketing insights on social media, chose his birthday to unveil his All-time Dream Eleven.

Here’s an unbelievable assortment of 11 of cricket’s greatest cricketers, some whose legendary status overpowers that of The Don, Sachin, Lara and Warne. 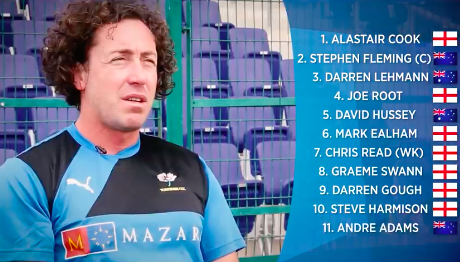 Well, let’s admit it, Cookie was the finest captain who didn’t sack me from his ODI team. Apart from that, that blue-blooded English royalty! Am a fan of the great advice Cook offered me when I asked him how could I improve my bowling.

I wanted to bring in more bite into my record: 29 ODI wickets from 25 games. So Cookie told me to change my craft to an off-spinner and advised me against the haircut. I regard the man like the Queen.

As a pure opponent, Fleming was the nicest bloke I played against. To this day, I remember failing to pick his wicket. Actually, he was run out each time before I came into bowl. So in a way, he saved me from so many boundaries and breezy hits into the park. He also promised me an assignment as an upcoming actor in the Kiwi film industry. I hear they’re finding New Zealand’s version of a Samoan Tarzan. Flemings thinks am a natural for that one.

Well, I owe “Boof” a great deal in my life. He was the nicest bloke I never played against. The only time I came close to representing England in an Ashes Test was when I got late for selection at the Lord’s Test.

Some old prick pick pocketed me. It was early in the day and I had left my friend’s apartment sans any breakfast.

Lucky me that I found Boof tugging away into a bunch of hamburgers at McDonald’s. It had to be light, for there was a long training day ahead. But looking at my puppy-face, Boof would quickly hold my hand and bring me a Vanilla cone when I demanded him a green, leafy McVeg. I still owe him for his docile manners.

Well, this one is for Yorkshire.

Let’s face it, how often did we see a top notch cricketer miss so many national games only so he could represent his domestic side?

Huss was the nicest bloke I met on the playing field.

He also dropped me twice when we played backyard cricket at Cookie’s home. How kind.

From his smooth, hoppy run up to the many times he found the outside edge of his bat to the 3rd man boundary, as he attempted to flick one on the on side, Ealham was what champions were made of.

Very early in life, I based my game on his style. Just that Mark lasted way more than I did. I am told, English Cricket cried the day Mark Ealham retired? By the way, did you know which team he played for. Here’s a clue: Mike Atherton faced Alan Donald’s hostile spell for this team.

In my view, Read’s reading of the game was the finest, accept when he wasn’t available for national duties. Look at that first-class record, 349 games, 16000 plus runs and 1051 catches. Just don’t ask about those 41 ODI catches. These selectors are Poms. Absolute Poms. O wait, they actually are.

For quitting the game on so many precise occasions, each time where his economy rate resembled China’s GDP, I tip my hat to Swanny. Also, it was Swanny who helped me set up my Twitter profile. Am glad that since that day, I’ve found profound followers. Reach me at @Iwillkickyoursidebottom

How often have we seen a cricketer who dances so well, despite an ever protruding belly? Goughie was to England what Santa is on Christmas-days. Just that his bag of goodies had too many extras; which invariably went down the opposition’s way.

But he’s an absolute legend.

It’s a shame that Gough didn’t play in the age of great histrionics. Maybe his tango-styled celebration would’ve bettered Gayle’s gangnam in the day.

My favourite all-time cricketer. He was polite. And kind. And someone who ironed his own clothes and slept on time. A hard working bull, well keeping physicality aside. I remember our meaningful team-building exercises inside the Green room. We all had to often maintain a two-minute calm at the end of a hot, blistering day’s action. Harmison’s two minutes would lead to five, then ten before eventually going mum for hours together.

I guess, his peace and equanimity inspired me to pen down my autobiography’s title, “Mum in Silence.”

Let’s just contend with the fact that here was a player who wore his hair slightly better than I did. Wait, did he have some hair? 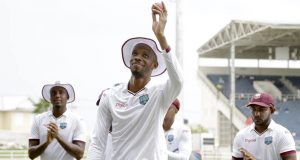