Having scored consistently for Free State and even leading South Africa in the Under-19 world cup, Elgar’s had to fight at every stage before making the Test opener’s spot his own.

There is little irony to find Dean Elgar fighting it out on more occasions than none for he’s someone who has risen through the ranks and has even had to endure bad luck when despite making it to the national side for facing Sri Lanka, he had to be withdrawn at the last minute facing an injury. A technically sound batsman who’s had to adjust his technique especially when confronting mean pace and bounce, Elgar is gradually coming in his own, having debuted back in 2012.

Not a brutish, freely striking player, Elgar is someone you can vouch for when it comes to surviving a difficult session and consolidating runs. Not by vicious scoring of boundaries but by onerously rotating strikes, looking for vacant spots on either side of the wicket.

In today’s modern Test era, the batters are essentially seeking flamboyance but here we have one soldier looking at carving a niche for himself through sheer accumulation of runs. Nothing fancy but holding his own.

Dean Elgar isn’t your massive hits or luscious heaves sort of batsman. He will take the blows. Defend the odd ball. Play with the line rather than going against it. He will expose his body to the physicality of a challenge and fight it out.

Those who fancy seeing Test batsmen get off from the very first ball would find Elgar’s contemporaries like De Villiers and De Kock fluent. But those who seek excitement in seeing an opener battling through the grind, defending his stumps will spot in Elgar his passion to stick it out.

His grit and determination is reflected through his insurmountable quest for runs. If 2017 wasn’t an indicator of this then what will ever be? In a year where there was no dearth of ebullience in Virat Kohli’s batsmanship, considering he made scoring double hundreds seem like child’s play and the way Steve Smith bolstered Australia in either formats of the game, Dean Elgar notching up over a 1000 Test runs was something special.

He broke through a somewhat elitist marquee of batsmen whose continued dominance had somewhat dulled the anticipation of those who lurked for thrills and surprises seeing familiar names dominate headlines. Scoring at a stellar average of 53, Elgar’s 1128 were painted by 5 hundreds. Did Virat and Williamson and the likes see that coming?

At the same time, it ought to be said that in Aiden Markram, Elgar is fortunate to have a dependable batting partner. That Markram can do well with a word or two from a left hander who’s been no stranger to brute asks of five day contests and the anxieties of facing ripening pace on turning tracks for five summers and counting holds South Africa in good stead.

Given Markram’s exuberance, he seems a perfect foil for a more cautious, vigilant batsman who takes time to get going. But while runs have been coming, albeit with certain truncations, thanks to a recent spell of utter excellence by Kumar, Shami and Sharma that really got Elgar and company thinking, it appears that in Elgar- South Africa have a safe bet for the future.

But whether he can emulate the successes of his glorious predecessors- Gary Kirsten, Herschelle Gibbs- only time will tell. Till then, it’s all to play for, for Dean Elgar. 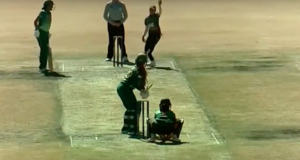 Chandhana Gogineni - April 5, 2021
0
The Proteas emerging women’s team are in Bangladesh starting April for an unofficial one-day-international series. The central idea of the contests is to groom...