It’s January 17. We are at the surreal, green Mount Maunganui. Batting first on a wicket that hardly seems to be assisting quicks, South Africa Under-19 hoist 282.

It’s never going to be that easy for Emmanuel Stewart’s boys to chase down 283 with the evening wind slightly beginning to assist Proteas quickies. There are quite a few to contend with.

Above all, there’s former pace gun Nitni’s son, Thando Ntini. It suffices to say, his cold stare is enough to dissuade batsmen from focusing on the task. His robust build, high-arm action and ability to hit the deck hard isn’t going to tickle the West Indies lads into a smile.

The Proteas seem to be all over the West Indies. Their start truncated and left in a state of turmoil ever since the commencement of the 7th over. In a space of 78 balls- West Indies have lost their top four. Melius, Simmons, Stewart and Yadram contribute not even 60.

There’s bounce but importantly, movement off the seam.

West Indies’ troubles are exacerbated by the hapless struggle of captain Emmanuel Stewart. He fails to put bat to ball and ends with a 17 ball 2.

It’s a tough life out there when your top order collapses contributing not even 60.

But the time it is 63-3, a young, firm left-hander has made his mind to stoutly defend his bleeding side.

First up, a short-pitched delivery from left-armer Mnyaka is dispatched to deep mid wicket. In his blazing pull, the front leg is lifted mid air to allow the body to forge into playing a front footed pull. The famous Caribbean pomp is exhibited but only meekly.

Next up, a straight drive down the ground coerces Mnyaka into thinking just what is going on. By the time the 30th over begins, the West Indies are breathing.

A promising and importantly fearless Dominican Alick Athanaze looks all set. He went on to score a dominant 76 which ultimately wasn’t enough. But his brave defiance meant that his team weren’t going to be forced into submission.

Alick Athanaze- who affirms himself into a position that’s seemingly a cross between a Kieran Powell and Evin Lewis like stance made a mark in a tournament that proved to be a blemish for the West Indies Under-19, replete with poor fielding and inconsistent batting.

But the hammering served by the free-striking, attacking middle order power in Athanaze had Kenya and Sri Lanka struck with decisive blows. Two sparkling, quickfire unbeaten hundreds would define the little success that West Indies savoured at the back of Athanaze’s talent.

It isn’t everyday these days that we see a West Indian contort the outcome of a game by a stroke-play unsullied by his team’s condition.

Through his exquisite timing and ability to get on with the scores quickly, Alick Athanaze provided a little cushion of support to a somewhat jaded Windies in a tournament where courage and team spirit go a long way toward defining success.

Even as India’s Prithvi Shaw and Shubhman Gill emerged as wonder boys of the 2018 Under 19 World Cup, Athanaze with 418 runs- including 2 hundreds and 2 fifties- went about quietly doing his job. At 19, Athanaze is still learning the ropes of success.

But armed with a hunger to score and a lithe built, the future of this soft-speaking Dominican seems bright. The only question is, how well would the West Indies Cricket Board and their support staff utilise a player who could be a quality asset to the national set-up? 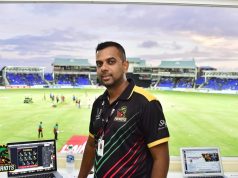