India are taking on a dominant Aussie side in a high-voltage virtual quarter Final at the ICC Knockout Trophy under the leadership of Steve Waugh.

Sachin Tendulkar is uncharacteristically edgy and trying to unsettle McGrath with a barrage of lofted and high-risk strokes. There are also some ‘friendly’ expletives thrown at the wiry fast bowler.

The not-so familiar Tendulkar, who has taken the field has had his mind and technique muddled by a series of nagging spells that he has had to face at different parts of the world. Though Tendulkar manages to decode Glenn McGrath’s bowling analysis, it is evident that the master is ill at ease facing up to him.

At once, India discover they are confronted by a peculiar kind of menace. Just that it isn’t brutish rather lithe. It isn’t of the monstrous frame, the kinds we’ve seen horrifying from the Caribbean. Rather stoic. It’s a force like any other. McGrath could get under the skin of the best in business and make them do silly and reckless things!

The tremendous success that Glenn McGrath tasted in international Cricket came at the back of a hackneyed process repeated day in day out, spell after spell. On a Cricket Field, McGrath befriended a line on middle and off Stump and then set out on an onerous journey, never for once leaving the side of this best buddy. In that sense, McGrath ‘s ‘Mantra of success’ was simple.

But, effectively the impact he had on a batsman was complex. His greatness lies in the fact that he tested and got the better of the Best of the Best. Be it Lara, Tendulkar or Kallis, Glenn McGrath tops the list of the bowlers whom these batsmen didn’t enjoy facing. McGrath not only examined the tightness of one’s technique like a ruthless Headmaster but also made batsmen doubt themselves.

Interestingly enough, McGrath plied his trade at a time when there were other greats too. Allan Donald could be nasty and fast. Curtly Ambrose could get the ball bounce awkwardly and had an irritable and flashing temper. Brett Lee was quick, hostile and unpleasant. So, the reinforcement of McGrath’s genius leaves behind a question for all to ponder over.

What made ‘Pigeon’ special?

The answer to the question is as simple as McGrath’s process. He didn’t trust exaggeration at all. His bowling style was economical, rhythmical and didn’t put much stress on his lanky body. It made him keep injuries at bay and keep on playing.

The stoical and robust line and length he maintained outside off coupled with just enough seam movement that induced the edges and often, only just missed the bat. He also had the ability to bowl a mean and heavy bouncer which didn’t allow batsmen to come on the front-foot with aplomb. As he approached the twilight of his career, McGrath also imbibed the nuances of reverse- swing thereby amplifying him to the level of a complete bowler.

In the current generation, Josh Hazlewood comes close to being on the same page as McGrath essentially following the same template as the 6’5’’ New South Wales born man followed. The 563 Test Wickets that McGrath snapped were all obstinately woven around the same mechanical ‘process’ of bowling the ball in the corridor of uncertainty.

He holds the record for the highest number of Test Wickets by a fast bowler and is fourth on the all-time list. He also had his fair share of run-ins with batsman. The sight of McGrath charging at Ramnaresh Sarwan or pushing the burly Matthew Hayden during a domestic game isn’t exactly what you would like to see on a Cricket field. But, McGrath had a rough edge to his character. When he had the ball in his hand he could make it talk and swear as well.

Isn’t he the most fierce competitor we have ever laid our eyes on? 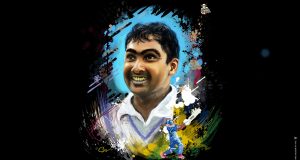