Rules are for cricket, Cricket is not for rules.

Recently, during the second ODI between South Africa and India , the ICC was at the receiving end as commentators and cricket pundits bruised aside it with some sharp criticism. Owing to implementing a rather bizarre rule wherein on-field umpires Aleem Dar, Adrian Holdstock and match referee Andy Pycroft decided to stop the play for a scheduled launch when India was just two runs short of their victory, fans were surprised. As were onlookers staring at the TV sets with India having to take the field again having to score 2 more runs in an easy stroll to victory.

This unfurled a box of questions. It was as if, someone had opened the Pandora’s box. What came out were reactions. Tons of them.

The decision prompted a plethora of criticism from all corner of cricketing fraternity. During the second ODI, India winning the toss elected to field first and bowled out the hosts for mere 118 in 32.2 overs. With 17.4 overs left to complete the 50 overs of first innings umpires asked India to commence the chase after 10 minutes of change over.

After opening pair Shikhar Dhawan and Rohit Sharma gave India a decent start India were on right track to complete the chase since captain Virat Kohli (46*) and Dhawan (51*) were looking in fluent touch.

In the 18th overs of the match, India were 117 for 1, with two needed to take a 2-0 lead in the six-match series. At this moment, on-field umpires Aleem Dar and Adrian Holdstock called for ‘launch’ as per ‘rigid’ ICC law.

What does this indicate? Are we being too stringent in our adherence to laws even if that comes at the cost of consuming needless bouts of time?

The absurd decision left everyone-cricketers, commentators and spectators at grass banks- stunned. You couldn’t believe what was transpiring. This was no Test cricket.

It makes little sense when the winning team requires just two runs. Why should everyone be on the tenterhooks for 40 odd minutes?

If anybody thinks that even after such a weird decision fans will wait to watch the final result of the match, it could be said, they are somewhere wrong. How often have we seen fans leave the ground? There are things to do: probably a friend to meet, some important task to attend to. We’re in an age where every penny saved is a penny earned.

That penny, invariably translates into being time.

If anyone has seen images of before the lunch and after the lunch images of the SuperSport Park, they’d know how bad the decision was.

You know things have gone a tad bit out of hand when an expert like Michael Holding terms it ‘ridiculous’. “They want to make the game attractive, but this was a ridiculous decision,” he said while commenting on the match.

After 40 minutes lunch break, the packed SuperSport sported a deserted look because only a few people were there to witness one of the lows of world cricket. Finally, India won the match with nine-wickets and 177 balls to spare. The visiting side took a 2-0 lead in the series but questions arose that whether a small tweak in the rule was good for the future of the game other than an absurd ending.

In the longest format of the game, umpires have the right to extend time if the situation warrants. But one wonders, was it applicable here?

This calls for some serious assessment.

The governing body of the game might have forgotten fans have paid to watch the game. Cricket is an abiding force; a nuanced tool of entertainment. You are compelled to think, this isn’t the finest means of advertisement for ODIs, which is one of ICC’s major buck spinners.

Isn’t it better to be flexible than sticking to ‘rigid’ law as the rules are for cricket, cricket is not for rules? 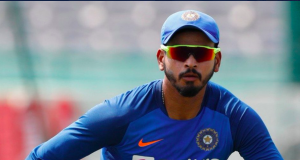 Shreyas Iyer – The Time To Prosper Is Now

Sameer Allana - June 7, 2020
0
Imagine you're just 20 years old, playing in your first-ever IPL. You end up with the highest run-tally from your side. The perfect first...