Karachi is lit once again. It’s flashing. It’s an ornate beauty. Quite like a jewel of the night. It’s like a beaming city that’s been sparkled by lights for the very first time. For a change, the West Indies are batting first. Although, it’s a dead rubber contest.

In comes Faheem Ashraf, steaming in hard at Rovman Powell. If you are a West Indian fan- you anticipate a huge heave over long on- the kinds you saw from Powell against a disgruntled Ireland in the World Cup Qualifiers.

But it doesn’t happen. Instead, he’s stuck well inside the line of the leg stump. The ball- a ferociously quick one- at 140 k’s hits the pads. Suddenly at the fall of the sixth wicket you find the scorecard bleeding.

It reveals 5 down for 96. Half the side gone isn’t the real worry. The concern is, it’s the 16th over of the innings. The run rate is at a lowly 6 an over.

Then, by the time the next wicket falls- the scorecard reads 6-140. Inside the space of 26 balls, the West Indies clobber 54 runs. How did this happen?

Is this a polite joke to make something worth the fans’ while? But that’s not true. You realise that good old Denesh Ramdin had been on strike. And lest it be forgotten he made most of his stay.

The big shots came. The mighty heaves were gorgeous. Some shorts were particularly sparkling-whether over long on or deep mid wicket- Ramdin made Pakistani fast bowling look preposterous.

Not on a single occasion does the mind read the impending result. You know instantly that the eventual score of 153 isn’t enough to curb Pakistan, a side riding high on the appetising batting of Fakhar Zaman and Babar Azam.

But it doesn’t matter.

For one of the old-guard’s of their game- Denesh Ramdin- has made some contest out of the final T20. He’s given you- the fan- just enough reason to save the remote control from being smashed into the window.

“Turn of that god-darn TV I’m sick of these boys playing”- was the thought in your mind when Powell departed for 2.

“Hang on, there’s fight left in this game”- is your thought by the time, 13 runs have come from the final 3 deliveries of Faheem Ashraf’s over.

Oh, how brilliantly does Denesh Ramdin change the context of a game. Doesn’t he? Truth be told, to hit a six is something usual.

It happens all the time.

Probably someone is hitting a six outside your bay window this very moment as you’re sneezing. But to hit two back-to-back sixes straight down the bowler’s head is a sight to behold.

Ramdin’s eventual 42 off 18 didn’t turn out to be a match-winning effort. It was too late in the context of the series. Like that perfect friend who arrived late in the day but saved you the blues in a sobbingly dull party.

But Ramdin’s effort proved just why was he being missed all this time. Nearly two years of being in cricketing obscurity haven’t dulled him.

There’s no evident sighting of rust in his batting. Not that we would know inside 20-30 mins of occupying batting time.

But it ought to be asked- with a scoring rate of 233, the kinds you’re accustomed from a Gayle or a Pollard- where were the selectors hiding when the last Pakistan toured the Windies in a four-match T20 series?

What were they dosing off on when the West Indies made a fool out of themselves on that forgetful winless New Zealand tour?

Ramdin boasts no muscles. He’s got no swag. He’s still a clean hitter. An uncomplicated bloke.

Would it hurt if a fairly uncomplicated bloke was allowed regularly to get his act together for possibly cricket’s most complicated structure? 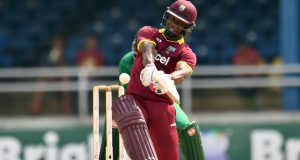 Dev Tyagi - December 27, 2017
0
For a team that is currently languishing at the bottom of the ICC ODI and Test rankings, a respite from defeat is both rare...