Perhaps the most awaited T20 league in world cricket is the IPL. A new season; a fresh perspective and therefore, a fresh resumption of an old rivalry shall begin in the next few hours. The clash between defending champions and most successful team in IPL history Mumbai Indians and Chennai Super Kings at historic Wankhede Stadium brings forth a mouthwatering prospect of cricket at its best.

Most important part of this season is that the IPL enters its 2nd decade and one of the most successful teams Chennai Super Kings and Rajasthan Royals return to the ranks. Even as Smith and Warner have been replaced by Ajinkya Rahane and Kane Williamson respectively, the talking point is still who might loom large among Mumbai Indians and Chennai Super Kings.

The duo happens to be the most successful teams in IPL history. Mumbai Indians have lifted the crown on 3 occasions whereas Chennai Super Kings have won twice. So there’s always the chance of the southern stars going one better. But for that to happen, the famous troika of Dhoni, Bravo and, Raina will have to better the might of their Mumbai equivalents: Pollard, Pandya and, Rohit.

But here’s a perspective of how the two have fared thus far.

Both teams have met 24 times in IPL history, out of which Mumbai won 13 times and Chennai won 11 times. Also, both teams met one another in 3 IPL finals, from which Mumbai won twice in 2013 and 2015 whereas Chennai won only in 2010. Therefore, there might obviously be a lot riding on Dhoni’s mind. Having made his return to a team where he belongs like a fish to a freshwater lake, he would want to make his famous opponents drown. But for that, his side will have to come up with an ace.

Mumbai seem the more balanced side

Mumbai Indians, for now, look stable and perhaps at their balanced best. Here’s why. They have retained captain Rohit Sharma, all-rounder Hardik Pandya and Jasprit Bumrah wherein they also used the RTM card for Krunal Pandya and Kieron Pollard. It goes without saying why Polly was made available once again. You don’t want to lose out on your killing shark, do you?

Mumbai Indians built their team around this core group. During the auction, they bought Windies opener Evin Lewis, Ben Cutting, Ishan Kishan, JP Duminy, Suryakumar Yadav. Lewis comes at the back of a good run in the ICC World Cup qualifiers. He and cutting are players who are growing in stature in limited overs format.

But they also have a young inexperienced spin bowling attack. As they have Anukul Roy, Rahul Chahar but no Harbhajan Singh anymore, Krunal Pandya leads the spin attack while Bumrah, Mushtafizur Rehman, Cummins take charge of the pace department.

It will be interesting to see if Rohit opens or not and how does the experienced core augment the presence of their newbies? For now, Mumbai Indians seem the most balanced IPL outfit.

Chennai Super Kings on the other hand have been finalists on 6 occasions wherein they’ve prevailed on 2 occasions- (2010 & 2011. But you would have to think they might be contesting with a bit of a rustiness having been out of contention for 2 full years.

They might prefer to continue with the core group of the team including Dhoni, Jadeja, Bravo, Vijay and Du Plessis. But where the experienced lot matters, they’ve also added flair of youth- in Rayudu, Watson, Harbhajan, Kedar Jadhav, Imran Tahir and Shardul Thakur.

By no stretch of imagination do they look like a weakling. The most important thing how will their captain MS Dhoni and Suresh Raina handle the big match pressure. Will Dhoni plays as a finisher, could it be that he comes in at number 4? CSK have all-rounders of the class and exuberance of Bravo, Watson and Jadeja. By sheer weight of experience, they lend useful stability to the team. Where the bowling options are concerned they have the problem of plenty- Shardul Thakur, Lungi Ngidi, Harbhajan Singh, Imran Tahir and Mark Wood.

It will be fascinating to see who is sent to see off the new ball pressure of facing Bumrah? Will it be Murali Vijay- Shane Watson or Murali Vijay- Sam Billings? For now, it’s all to play for as two of IPL’s powerhouses collide in the opening salvo. 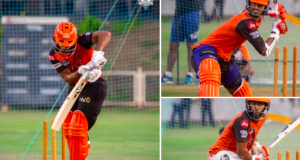 Chandhana Gogineni - April 29, 2022
0
Until the end of mega auction on February 13, none of us would’ve predicted Sunrisers Hyderabad would have...