The denouement of a professional sportsman’s career is a universal act which has to be embraced in all its totality by both the said sportsman and his fans. The career of a successful sportsman involves moments of anguish, joy and success brought forward at times which warrant show of skill and mental poise.

And then to suddenly sway out of the sport, which in a great way, shapes the life of an individual is excruciatingly difficult.

As the old cliché goes ‘all good things come to an end’, the consequences of that end are felt both subjectively and objectively.

Abraham Benjamin de Villiers set afoot a cricket field only to leave the spectators and other players befuddled with his rare DNA which led him to do freakish and surreal things. His subtle demeanour on a cricket field masked superhuman like qualities intertwined with skills and abilities which defied logic and sanity. AB de Villiers will no longer ply his trade in the game which was only enriched with his presence. He has decided to walk into the sunset with a legacy that is both unparalleled and epic in the annals of International Cricket.

All international sportsmen have always strongly voiced their strong opinions regarding the need to leave the game on a high irrespective of the physical and mental dynamics that different games present. The Protean superman has left the game certainly on his own terms right at the juncture when his own nation is once again trying to muster the courage to dream about a World Cup triumph in 2019. South Africa’s tryst with the World Cup began way back in 1992 and their sojourn at the prestigious tournament so far can best be described as bitter and heart wrenching.

The visuals of an emotional Morne Morkel and AB de Villiers after the defeat at the hands of New Zealand in the 2015 World Cup at once presented a piteous spectacle which once again proved to a definitive degree that   Poetic Justice is an elusive term in the sport.

What set him apart?

As a thumb rule prevalent in the glowing universe of a sport, to talk incessantly about an individual’s skill and talent is considered rude as the talks seemingly echo that an individual has not performed well enough or has not accumulated dazzling numbers, hence the talks about skill and not performance. Not in the case of De Villiers though! His presence on a cricket field instigated a curious streak of unimaginable antics cocooned with rampant innocence all jettisoned at once.

But, then all these things were commonplace with De Villiers around, wasn’t it?

The prologue to the De Villiers story is as interesting as his career. It all began with a love for all kinds of sports and an awe-inspiring ability to be good at everything he laid his hands on. He holds the record for scoring the fastest 50,100 and 150 in ODI’S. To even think about the fact that he started his career as a wicketkeeper is astounding and dizzying enough for anyone. His International debut came against England in 2004 and played an ODI in early 2005.

Unsurprisingly, Mr 360 has surpassed 8000 International runs in both Tests and ODI’S and has a batting average of more than fifty in both formats of the game. His record clinching 31-ball hundred came against a clueless West Indies team whom he pulverized into submission. His tally of 47 international hundreds has solemnized him as a great batsman whose presence in the Protean dressing room will be sorely missed.

The sight of AB de Villiers being carried on the shoulders after a victory at the 2019 World Cup would have been a perfect swansong and the most romantic sight on a cricket field. But, it wasn’t to be!

His checkered international career saw him do unbelievable things on a cricket field for his country as well as in League Cricket for Royal Challengers Bangalore.

Won’t we miss those audacious moments of daring stroke play and flashes of pure genius from Abraham Benjamin De Villiers? 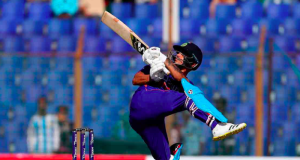 Saksham Chugh - December 12, 2022
0
The Indian team already lost the ODI series after failing to chase 271 against Bangladesh in the second...