It is almost befitting of his state of mind and the fact that international cricket finds itself on the crossroads, unsure of its own viability, that AB De Villiers has decided to retire from the game with immediate effect.

The explosive batsman was not just ahead of the game in terms of its initials, he was amongst the chief pioneers of big hitting, fast scoring, exhilarating stroke play that would leave the viewers in awe of the man.

The toil of 14 years at a top level of a game is one of the leading batsmen in all forms of cricket is physically demanding, out of which the last couple of years he was fighting fatigue & time and again being accused of picking and choosing when to play for South Africa turned out to be mentally draining as well and was the dominant reason for AB De Villiers to end his Protean career.

The man who brought reflexive skills rare amongst athletic sportsperson, and whose one of the most revered cricketing GIF would be that insane leap to pluck a catch out of thin air just a fortnight ago, has finally run out of fuel.

Ultimately, the retirement came as a bombshell, disappointing many and perhaps unexpected given that only last August, less then a year ago, he had recommitted to playing all formats for his country.

There are very few batsmen with superior records to AB De Villiers and there are even fewer who have displayed greater talent and intent.

No one can question his commitment to the team’s cause in match situations, this is the man who scored 149 runs in 44 balls in an ODI when his team required him to tee off and this is the same man who made 43 runs of 297 balls in a Test match when the situation demanded him to park his horse at the crease.

AB De Villiers enjoyed mass appeal wherever he played, but in India, it felt as if he was among our own. Over the years, his annual IPL jaunts made him a revered figure. The ability to play seam, swing, spin and, score at a full range of that classic 360 degrees made him second to none. Suffice to note that the South African is easily the most popular non-Indian cricketer. Not even greats like Lara or Kallis or even Ponting for that matter have caressed our hearts in a way that AB has.

It’s no coincidence, therefore, that every time he comes to bat, stadiums across India get drowned by that all too familiar chants of ‘AB… AB.’

Did we predict hearing another cricketer’s name apart from Sachin’s reverberating in Indian grounds?

No numbers alone can ever define the greatness of a cricketer.

For it is the sheer joy that a cricketer provides by virtue of his efforts that comes as a defining achievement.

AB has achieved it all with distinction, be it accolades for him being an utterly humane trier who performed superman feats or how sagely aloof he remained to the intoxicating fanfare greeting his feet.

Even saying this, AB De Villiers numbers are a statistician’s delight.

With 8765 Tests, 9577 ODIs and 1672 T20s runs, AB is easily amongst the modern-day greats of the game. It’s emphatic that how little he cared for the rankings and how often rankings sought him, every now and again.

In his 114 long Test career, the South African legend has scored 22 centuries and 46 half centuries at an average of 50.66.

He leaves the game ranked as the number 2 batsman in ODIs. He is the only batsman to have played 50 plus ODI innings and maintained both a 50-plus average and 100-plus strike rate.

Besides, he’s also being a world record holder to score a fastest ODI century.

It’s almost unfortunate and a dichotomy of sorts that even with such plethora of records, AB will not have any silverware to go with it.

Must we remember that the eternal entertainer never sought any material gains from the sport. What he treasured most was playing along with his mates in a side that’s known to be a colossus of world cricket and of which he was an unputdownable emperor.

What mattered most to AB was to devote himself to uplift his mighty South Africa.

That De Villiers was brutally honest while admitting in a hush, a simple tone that he had no more fuel left in the tank to continue is both painful but incredibly audacious of him.

We can dread it as we have been for hours and hours together now, whether it is through crestfallen tweets and soul-crushing memes. But if there’s something we must learn from AB then it’s to listen to one’s hearts. And it goes without saying to believe that it takes courage to move on from something we are so attached to and in awe of.

“It’s time for others to take over.” Well said AB. For in the massive construct of what you attained, there’ll always be you and the others.

It wouldn’t be unfair to say that with De Villiers retiring, the game has lost one of its most creative and talented students. Although, it could be said that he was someone who as much a learner as he was a carver of epic cricketing literature, reading which can fetch us gratification for life.

Cricket will celebrate itself whenever it remembers you. 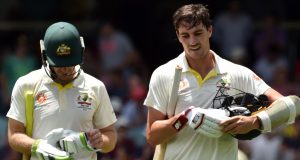 Exhausted Pat Cummins Shows Australia How To Soldier On