The evening sun is out and it seems that a day well spent is coming to a close. Cricket’s been in the air. The home team’s been busy.

A call comes into the room no. 172 at the Rainbow Towers Hotel and Conference Centre.

The operator politely asks, “Dear Sir, what may I serve you for an evening snack, I realise you were out all day since morning?”

Aaron Finch answers the operator, in usual nonchalance, “No thanks… my stomach’s full… I’ve just had Zimbabwe for lunch.”

The modern question in international cricket for the longest time has been, where were you when Sachin Tendulkar appeared in his 200th Test?

Besotted fans cried buckets and ran Barbados dry when Brian Lara asked of a silent, stunned crowd, “Did I entertain.”

The heart may still be pounding at mere recollection of cricket’s horrifying truth: that AB de Villiers is no longer in the sport.

But if you were witness to a feat of a seismic shift in the current waning fortunes of Australia-at Harare-then the question more likely could be- “Where were you when Aaron Finch struck T20’s highest-ever score?”

Gayle’s already done it before with 175. Masakadza, a part of Finch’s tormented opposition camp struck a whirlwind 162.

But would you compare these knocks to Finch’s effort?

Remember Grandma’s staple warning about walking down the basement alone at night at your own peril.

It’s something of that sort.

But let’s shy away from the ignominy of counting them as T20’s burly scores.

In all due respect, both Gayle and Masakadza’s big strikes came in domestic T20 leagues.

It deserves the attention a big score struck at the top echelons of the sport warrants.

But can there ever be a record-breaking feat minus needless underminings by critics?

Tendulkar’s 200th Test appearance was “a bit too much”.

Gayle’s 215 came “against a weaker opposition”.

In all likelihood, at this point in time, someone somewhere would be delighted to take a dig at Finch’s effort against Zimbabwe.

It could be said with the same certainty that De Villiers pummelled the hapless West Indians- twice on way to his record-breaking scores- that there are those who fancy ignoring Finch’s 16 fours and 10 sixes; and choose to focus on the light-weightedness of Finch’s opponents.

But is it Finch’s fault if bowling to his buzzing blade was Mpofu and not Tim Southee or Trent Boult?

How is Finch to be blamed if those who failed to wrap him around the pads were Chisoro, Muzarabani and not Chahal or Kuldeep Yadav?

Did we utter a word when De Villiers launched scud-missiles into an unassuming Jason Holder camp on his way to 149? Wasn’t AB feted for his heroism for blasting Windies playing only 44 deliveries?

World cricket stood up in applause when Tendulkar was ‘awarded a Test retirement’, the BCCI conveniently buying a weaker cricketing board- sending lambs out on slaughter from the Caribbean to the Wankhede.

If Cricket remained numb, wordless then, why can’t we raise a toast to Finch’s great T20 strike?

Truth is, Aaron Finch did what Aaron Finch would’ve done on any given day with poorly judged bowling hurled meekly at him.

You throw at a hungry tiger a meatball, he’s gonna come after the entire body of prey.

What’s left behind is a great meal and a decapitated body.

Some live for the numbers. Others prefer to produce something exciting ‘in’ the moment.

You know where to put Finch.

Why Finch’s record-breaking score ought to be celebrated is that it came for a side that’s as badly wounded (current form) as a soldier suffering under heavy enemy shelling.

It may have come against a weaker team, but would you call the side Finch represents a world-beating champion team?

On any given day, put Gayle and Evin Lewis among Samuels, Hetmyer, Russell and Brathwaite and they could pluck Australia into a hell hole.

Moreover, Finch’s rise to form comes at the back of a lacklustre ODI series.

Even then he muscled a hundred.

So if he muscles a T20 hundred- a rare occurrence- converts it into a world-beating score, why shouldn’t it be given the same treatment as any batsman striking a triple hundred on a flat deck?

Remember Lara in the summers of Antigua, 1994? 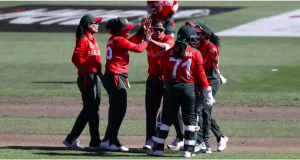 Chandhana Gogineni - March 14, 2022
0
To say that Bangladesh pulled out a stunning victory against Pakistan in its maiden...