Australian cricket is at its lowest ebb at present.

The ball-tampering scandal ripped the heart out of their great cricketing culture and has brought the current team to its knees. Humiliating defeats in Test and ODI cricket in the past few months have punctured the faith of their fans further.

One wonders how exactly would Australia recoup from this grave damage.

But what are the chances of someone who has been awarded Australia’s Domestic Player of the Year in February this year to find a place in the current setup? This, mind you, is a team that badly needs a sturdy batsman in the middle.

Curiously, however, there’s yet no sign of George Bailey in the Australian international outfits.

Here’s what you ought to know.

Bailey had a stunning 12-month period in 2017-18 where he was the leading run-scorer in the Sheffield Shield, JLT One-Day Cup and Big Bash League.

In this phase, the batsman amassed 1468 runs across all formats at an average of 52.43 with 3 centuries and 11 fifties – a career-best of 200 not out against a New South Wales- his defining moment.

With these numbers behind his back, Bailey should have been the top contender in the Australian Test and ODI teams, especially in the present scenario where they are struggling without the services of Steve Smith and David Warner. But where’s he now- augurs for an investigative analysis. Have the Australian selectors even gazed past Bailey’s recent stellar run? Had they done so, Cricket Australia wouldn’t have been caught napping.

At present, it seems, selectors are content to give the ridiculously erratic Glen Maxwell endless chances. When was the last time Maxwell won the Aussies a game on his own? Eight in ten may remember Maxwell for his histrionics with the bat a few season ago for King’s XI Punjab. Even then, he was blooming under the leadership of George Bailey.

Not too long back, Bailey was leading the Australian ODI team and was doing a pretty fine job at it. He had a very productive four-and-a-half-year stay in the Australian ODI team where he collected 3044 runs at an average of 40.58 with 3 hundreds and 22 fifties. He was an assuring presence in the middle order and had made the No.4 position his own, especially after that phenomenal ODI series in India in late 2013 – his best ever in terms of runs scored – where he hammered 478 runs in 6 games with 1 century ad 3 fifties.

However, post a poor 2016-17 season where he could only managed 154 runs in 9 games, he was dropped in January last year. Ever since, Bailey, who was No.10 in the ICC ODI rankings back in 2015, has been doing what he can do best – scoring runs in domestic cricket.

His performances have been simply electric. Yet the doorbell isn’t being answered by Australia.

The Tasmanian has hence been hurt and disappointed at the constant snubs by the selectors despite piling on the runs across formats.

“It was frustrating because I felt like it was premature,” he told cricket.com.au of his axing. “I honestly felt like I could still play a really good role. And particularly I felt my role wasn’t necessarily to score the runs on the day where Davey Warner or Steve Smith was going to score the hundreds. My job was to be the guy that held up the ship when those guys failed,” he added.

Bailey couldn’t have placed his words better; much like would effortlessly place the ball through covers when in the flow. The No.4 position is proving to be particularly problematic for the current Australian ODI team and what they need right now is an experienced batsman to hold that spot. Bailey, who already has the experience of leading the Australian team and has played the most number of ODIs after Aaron Finch in the present team, fits the bill perfectly. The current form he has shown clearly proves that he still has plenty to offer the national side and could make a difference. All he needs are proper chances.

For now, Bailey is hoping to get a call from the national selectors. Australia has some big series lined up against New Zealand, South Africa and India in the coming months. Having just been humiliated 0-5 against England, they cannot afford too many similar slip ups before the 50-over World Cup next year.

Giving George Bailey an opportunity might not suddenly lift Australia out of their current mess. But it’s not the worst option to adopt. In the current side, one needs someone who’s as much a mid-inning crawler as well as a plunderer down the order. Bailey has done all of that smilingly.

His scorching cover drives, not the most aesthetically pleasing but effective batting stance and calming influence might well be the spike that Australia needs right now. The only question is- are the selectors listening? 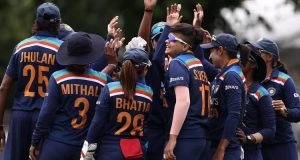 Chandhana Gogineni - March 6, 2022
0
India has been a revelation when it comes to their performances ICC tournaments since 2017. The 2017 edition...