There was a time when opinions on the game came only from the informed.

It wasn’t a rule of sorts; it was just how things were.

Those who had knowledge spoke. Those who didn’t merely enjoyed the proceedings.

Back then, there were no memes. None knew what a Tweet meant. The meaning of a share was only limited to the realm of finance; it didn’t have a social media connotation.

Cricket catered to both as it still does.

Discrimination wasn’t in its DNA.

But that was then.

What’s most dramatic is that there’s a constant growth of commentators.

And surely, we are in dramatically changing times.

The screen on which you see Joe Root or Williamson carve their next cover drive isn’t always the idiot-box or a flat-screen.

Long before, a Wes Hall running to the popping crease could be heard on the transistor. Today, as Stokes and Starc target the stumps, you see it on apps as well as on YouTube.

Reactions from fans in midst of live action and heartening messages in stadia often transform into trolls on Facebook by the end of the game.

Commentary, likewise, seems rabble, especially when everyone is a self-styled expert. And when things generate heat, regardless of whether a Virat scores a duck or a hundred, whether the Proteas clinch a major series or capitulate suddenly, often a wise comment turns into mindless babble.

It is amid the constant sound of chatter and noise that one remembers the purist. He’s someone who operates in a dugout decorated by stats and analysis. It is amid changing vagaries dominated by a flooding of opinions that Cricket upholds the role of the commentator.

And few in the sport are as loved as they are regarded widely as Harsha Bhogle.

They call him the voice of cricket.

But there’s more to Harsha- a man all love to hear and all hear ending up loving the game more.

He’s the one whose voice seems to carry the balance when all around are losing theirs.

Even in his intensity, there’s precise focus on the use of words. He throws analogies like rescue operatives throw life-vests at those who’re drowning.

His voice saves you from the clatter of inclement weather of hostility on the pitch.

Harsha Bhogle is probably Alan Wilkins’ warmth+ Tony Cozier’s remarkable repertoire with the vocabulary. It only means his impact doubles where even profound individuals struggle to strike.

Today, Indian Cricket can be proud that it’s not Virat’s elegant wristy flick that conjures a delight alone. It’s that utterly humane voice behind the mic that delights just as much.

Harsha Bhogle hails from India, but his voice belongs to everyone.

He does it pleasantly, his doesn’t strive for attention. He’s the deft touch of Brian Lara’s late-cut and the grace in a commanding straight drive of Sachin.

He’s not what heated arguments between bat and ball produce.

Harsha is purely the opposite of a sledge.

His calming, soothing voice overpowers when Cricket recedes to moments of malarkey, such as ball-tampering and utterly poor shot-selection leading to a batsman’s downfall.

Yet, despite such profound love, Harsha’s managed to keep his head in the middle of his shoulders and his feet firmly planted on the ground.

Have you heard Harsha resort to cheap, scathing criticism?

He didn’t have to anoint nicknames to cricketers to express his love. You didn’t hear him refer Dravid as “The Wall”. Harsha Bhogle didn’t have to burst into childlike enthusiasm addressing Saurav Ganguly as “The Prince of Calcutta.”

He didn’t offer intellectual prowess on the public’s takedown of South Africa as “chokers.”

It’s been two and a half glorious decades of ‘hearing’ cricket with Harsha and it seems it was just yesterday. Captaincy has exchanged hands from Ganguly to Kumble to Dravid to Dhoni and finally to Virat but Harsha’s voice still carries the suave it always did.

There’s little wonder that back in 1992 he was chosen as the ‘sexiest voice on Australian radio.’

Even when Kohli masters a run-chase, climbs another summit of statistical exuberance and the game ends, a thing remains.

It’s those lines that stay in your mind, long after a total has been chased or when a score has been defended.

When Rohit Sharma recently struck a square cut off Moeen Ali in the recent T20s, Harsha announced, “The outfield seems to have been manufactured by the batsmen today.”

Further, when Sharma and Rahul were taking the attack to England, KL hitting fours every single ball, the moment Sharma dislodged a poor ball over mid on, into the stands, Harsha echoed, “the ball says do me a favour, hit me out of the ground and Sharma says, you know what, I’ll oblige.”

Words become critical highlights of a game when coming from Harsha Bhogle. Cricket doesn’t seem in need of any commentary for Harsha ensures it transcends into some kind of poetry.

If Da Vinci used that paintbrush, Courtney Walsh the red ball and Sangakkara the willow, then Harsha’s painted a glowing portrait of the sport using the mic.

He’s a player who builds an inning of grace, fashioning monuments with eloquence from behind the mic.

And perhaps what makes Harsha every bit interesting and worthy of the respect is that he never punches above his weight.

He’s incisive but never cunning. He’s as intelligent as you’d want your cricket narrator to be but never condescending.

Harsha Bhogle doesn’t bring cricketers down. Verbatim is not him.

He may not throw multiple stats corroborating the history of a cricket stadia or state the highest 10th wicket stand the Aussies managed against England in every Ashes series the way an Ian Bishop or Bill Lawrey can.

But Harsha can light-up a dull game brightening up with his quintessential luminance that stems from his passion to narrate the game unbiasedly.

To this day, one doesn’t know who’s his favourite bowler, wicketkeeper or batsman, yet many will tell you who their favourite voice behind the mic is.

Sachin smiles with him, the silent Dravid nods his head in approval in his company and Harsha can make Saurav unravel a few green room secrets like no other.

Harsha’s success isn’t the number of contracts he’s bagged, year after year from the cricket board. His true measure as a great is the number of times he’s rescued cricket from mediocrity, beautifying the sport using a texture of language.

It’s a rare feat. One that deserves to continue for years together. 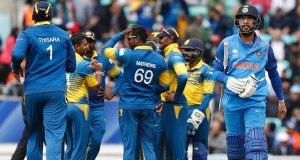 Gaurav Sethi - June 11, 2017
0
In the seventy two hours (and counting) that have passed since India’s shock loss to Sri Lanka, Champion’s Trophy has unfurled a vital lesson....