A consummate competitor or the beholder of a cricketing bastion referred as Australia?

Probably, the protector of a legacy called Australia and also its enhancer.

Who is your favourite Allan Border?

Exactly 2 decades back in the day, Brian Lara scored 153 not out versus Australia.

Half a decade ago, one man hung his boots. But not before holding the record of 153 consecutive Test match appearances.

It’s a record that’s not been broken by Lara or Sachin or even Steven Waugh.

There are certain things only an Allan Border could do.

Fans often or mostly stand by their heroes because of their runs, hundreds, wickets and five or 10-for’s.

But few men stand by their teams.

A minority manages the flesh or bone, rigour and passion to bail out their teams, no matter what.

And an even tinier lot lifts and upholds theirs. Allan Border belonged to this league. Essex, Gloucestershire, New South Wales, Queensland have all had the pleasure of having Allan Border represent them.

But Allan Border had the greatest honour; to rescue an embattled side.

He was the key molecule of the atomization called the Australian Cricket Team.

When the great Kim Hughes shed tears and relinquished the ‘rebel sides’ captaincy, not before Australia were biting the dust, one man got busy in getting the team back on its feet.

That man was Allan Border.

Before any of them- the mighty trinity treasured for determination- there was Allan Border, the brand ambassador of the phrase.

After the retirements of Rodney Marsh, Greg Chappell, Australia had plunged into a hole. It couldn’t be described minus cosmological terms.

This was a black hole. Allan Border decided to dive in and bail the side out.

Any die-hard fan would suggest that Border’s assuming the captaincy wasn’t his most favourite moment.

He felt he wasn’t cut out.

He’s what pop culture gazettes hail in celebrating an icon from humble origins- a reluctant star.

But by the time Allan Border retired, in 1994, playing it with passion and unbridled optimism, he’d transform the side he found facing its lowest ebb at the start.

From 1980 to 1995- Border did to Australia what Michelangelo did to the Sistine Chapel and David. He reformed the team that had been emboldened by the likes of Thompson. He revived a side that produced Cricket’s sassiest and most-admired name from oblivion.

The Don’s country awaited for a new dawn. Border would answer the call.

Before cricket receded to being a ploy seeing men become boys, applying external substances to tamper the ball, captaining Australia was once an honour.

Border carried this privilege with unbent focus and unparalleled stoicism for 93 Tests, winning 32 of those.

On flinty Australian pitches, the West Indians hammered them, England challenged them but Down Under- Australia had their own Babylon on fire.

Allan Border served as a chief firefighter during Australia’s most difficult times.

The West Indians, legend has it, took to cricket to find an inlet of expression from the inescapable tyranny of their white-skinned assaulters. Their excelling prompted great joy that united tiny isolated islands.

Cricket was an escape and, in turn, a redeemer of sorts for Windies.

But for Allan Border, it was about survival. The glory came later.

In the Hollywood lexicon, Allan Border saved the Gotham called Australia, one that was all on fire starting 1979, with the WSC winding up.

In 1981, Border hunted England, in England, scoring 533 at a staggering 59. In so doing, he became the Batman who had no wings but just fierce determination and the ability to fight fire with fire.

In 1983, he fought with Joel Garner on a Guyanese wicket that was as much about bounce as Curtly Ambrose was to the deathly stare. Back then, Border lifted Queen’s Park Oval to glories that Lara would better statistically, probably on flatter decks.

His unflinching 98 not out took seven hours of facing the Caribbean heat.

In those days Perth’s WACA oozed fire and the Adelaide Oval wasn’t always about easy runs.

But in those days where Cricket wasn’t so skewed to batters, scoring a 118 and 117 against Pakistan of the mid-80s was about as difficult as striking Gayle’s 175 in a 10-over a side contest that England are gravitating to.

Amid all of these onerous challenges, Border found a way to keep his average at 50, became only the second man to score over 10,000 Test runs and found a way to strike a lavish Test hundred in Sunil Gavaskar-land in 1986.

Border was the first in the series of the Matryoshka dolls. You open one, and only then you find the Taylors, Waughs, Pontings, Clarkes as minions.

Tendulkar hadn’t arrived in the sport and Joe Root and Kohli weren’t even born when Border became a legend.

In no offence to haters of philosophy, there’s a reason why ‘Borders’ aren’t to be crossed.

They are geographical restrictions imposed at respecting divisive lines. They are authorized stoppages, crossing which can cause geopolitical tensions.

To that extent, the name Border in cricket is synonymous with a respect and integrity that Australia earned at the back of this fierce competitor of his time.

Players are regarded rather effusively nowadays. The irrepressible Darren Sammy has a stadium in his name.

But could there be a bigger reward than a cricketing trophy being named in your honour? The Border-Gavaskar Trophy is a testament to Border’s resolve for his Australia.

Sachin may have a biopic and Lara a promenade named after him. But Border’s name is etched on a medal extended to recognize his country’s ingenious talents.

For a sport so obsessed with nicknames let it be reiterated that De Villiers came only recently. But the original AB arrived and conquered way earlier. 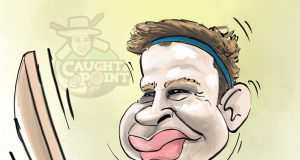 Steve Smith- A Sorcerer Who Can Turn Dust Into Gold And...

Dev Tyagi - June 2, 2021
0
Superlative. Ingenious. Brilliant. A bit flawed too. Want more adjectives for Steve Smith? Time is limited and you and I don't have enough words in...