The die-hard Test lover is head-banging thinking about whether Pujara can score runs overseas. Last year, at South Africa, Pujara, who excites claps for his stroke-filled and gritty runs inspired memes and trolls taking over 50 balls to open his account at the Proteas land.

Then, he’d move on to play lots of cricket with Yorkshire and when the time came to deliver the goods in the curtain-raiser versus Essex, he disappeared scoring 1.

What on earth is happening?

But usually, Cheteshwar Pujara is a dogged batsman, one liked by everyone.

So its needless to ask what comes to your mind when you hear his name?

We’ve heard grit, determination and hard work as a cursory reference point. But then these adjectives can also be used to describe the other members of the famed Indian batting line up.

So what sets Cheteshwar Pujara apart from the others?

Pujara is unlike any other modern- day Indian cricketer, glamorous or headline-grabbing.

He does not sport styled facial hair in an otherwise well-groomed bearded team. He does not feature a tattoo like Virat Kohli or a Murali Vijay.

He can’t hit sixes at will either, like KL Rahul.

Swag and Pujara aren’t exactly the best of friends. Neither is he a knight shininging armour.

Instead, he’s thought of as a glimmer of hope. You can spot him only when it is too dark. But one worries for him today.

Should he not score runs in England- and predictions be damned- one cannot avoid negative thoughts.

His place in the Test unit will be in certain danger. Sadly, he alone will have to be blamed. It wasn’t that he’s not had opportunities to perform.

But in South Africa, he wasn’t the Pujara you saw when he first-visited in 2013, a time where Faf was still new and Kallis about the make way into the exit door.

In the First Test, at Johannesburg produced a 153 and stuck around for 270 minutes. This was the guy who played Morkel and Steyn with rich aplomb.

An year later, he’d experience trouble by Broad and Anderson, his bullies in 2014.

Still- it will be stupid to doubt his abilities.

Such has been the effect of the number 3 batsman that he has often been required to score tough runs for Team India.

The Pujara that scored a double hundred that even the French would’ve hailed as ‘Magnifique’ was the sterling highlight at Ahmedabad. And a case in point about his record against England.

In his 206, he batted for 513 minutes. This was the knock in 2012 that confirmed his status as a possible premier Test bat.

Nearly, half a decade later, he’d return a few kilometres to Ahmedabad at his home-town in Rajkot and begin exhibiting the familiar grind albeit against a visibly vapid and ineffective Anderson. His score?

2017 would see 1100 plus Test runs for Cheteshwar Pujara, the beast relishing a homestay and going untamed.

Pujara’s ability revolves around his impeccable ability to tackle any bowler. He has a strong bottom hand and dabs the ball with minimal ease. Above all, he plays the ball with such soft hands, like an artist delicately painting iris with a brush.

Even though he has a very short bat lift, his follow-through is very textbook.

There is no doubt that Pujara is a run machine.

He is India’s most prolific batsmen in Test matches played in Asia since 2013, having amassed 2845 runs in 31 Tests at a whopping average of 63.22, which includes 10 centuries and 12 fifties.

But a look at his numbers outside the subcontinent, during the same period, excluding the Windies since they are the whipping boys of the big league, reveals the true problem, Pujara averages a meagre 28.76 in 15 Tests with just 1 century to his name.

That is where the concern arises and it’s up to the man to dissipate doubts.

This isn’t the way things were supposed to pan out for India’s successor to Rahul Dravid. Does it?

With the 1st Test match against England starting next week, India needs runs to flow from Pujara’s bat.

For that to happen, Pujara has parked himself in England well in advance and been picking Joe Root’s brain as well playing for Yorkshire in the county circuit.

But even there, he has been experiencing somewhat of a draught.

Pujara averaged just 14.33 in 12 innings for Yorkshire, including taking 70 minutes to get off the mark against Surrey.

Having scored closed to 90% of his Test runs at number 3, in his last 2 Test innings, he has found himself being dropped down to number 4. Add to that dodgy knees and a slow runner between the wickets, the forthcoming Test Series against England can make or break for Cheteshwar Pujara.

A lot hinges on Pujara’s ability to play the moving ball from the likes of Jimmy Anderson and Stuart Broad. That’s something he didn’t do well against the Poms when India last visited their dominion in 2014.

With all the spotlight on Virat Kohli’s struggles in 2014, Pujara averaged just 22.20, the worst ever average by an Indian No.3 batsman against England in England.

The stats are as much an indication of one’s achievements as they are of public pinning hopes for those standards to be met every time that particular player walks on to the field. And that is something Pujara can’t escape, the sooner he understands that and finds a way to start meeting the expectations, the better it will be for him and for Team India to give a good account for themselves come the Test series.

The ‘writing is on the wall’ for Dravid, were the murmurs back in the spring of 2011 just before the Test series was about to commence as is the case with Pujara at this time.

Instead, when the English summer of 2011 got over, the writing was about The Wall: dutiful, considered, and technically accomplished.

Pujara can very well take a cue out of his role model, Rahul Dravid. The tough get going when the going gets tougher.

What will the English summer of 2018 holds for Cheteshwar Pujara can very well have a huge bearing on the outcome of the highly anticipated Test series?

Over to Edgbaston now. 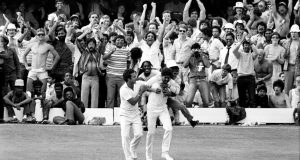 Vishal Pandey - May 29, 2019
0
1983 was no ordinary year for India. While N.T. Rama Rao triumphed in Andhra Pradesh on the one hand, noted dacoit Phoolan Devi's surrender made...