With the West Indies team being a constant source of disappointment and heart-wrenching escapades, my cardiologist advised against supporting them.

As the saying goes, a life without love is no life at all, so I needed to channel some love in another direction. Bring on the boys from T&T: Trinidad and Tobago Red Force. With a supreme captain, Daren Ganga and an extraordinary coach, Omar Khan, the men in red proved themselves time and time again.

The channeling of love in this direction was more worthwhile- who can suffer heart palpitations when Bravo (who at this time had no desires to be a singer) danced at regular intervals, Pollard’s attitude was almost non-existent and Dave “Tadpole” Mohammed used his shoes to make calls to the men on the boundary line?

Each defeat was made highly entertaining by these guys and you knew without a doubt, they were coming back stronger next time. Seeing that we come from a culture deep-rooted in bachchanal, we enjoyed the exhilarating chases and nail-biting defences and even when no company in Trinidad and Tobago wanted to sponsor the team for the Champions League T20, our boys had no problems sporting uniforms with Venkys plastered in at least six places.

Life was good, my heart was healthy and happy.

But this happiness seemed short-lived because, in 2013, my life was uprooted with the introduction of the hero CPL.

The boys in red were split up! Narine turned Guyanese and Pollard was now a Bajan. Where would or should my loyalties lie now?

Six franchise teams, vibes aplenty and non-stop action. But for actual cricket fans like myself, who are we going to support was the question?

Should I support Trinidad and Tobago Red Steel because it’s the country of my birth? Should I support the Trinidadian players, Sammy and Gayle, my baes? Would a franchise like this even last in the Caribbean?

Questions ran aplenty akin to puzzles in bowlers’ mind with a Gayle in massacring form.

Five years later, CPL has proven itself to be like all other T20 franchises: a water-down version of IPL and I support anybody and everybody because CPL is the only chance we have of seeing the likes of Sammy, Gayle and the Bravos playing for any Caribbean Team. Like IPL, CPL has the clear-cut winners, advantageous teams: Jamaica Tallawahs and Trinbago Knight Riders. Likewise, the RCB of CPL is Guyana Amazon Warriors who seem like real warriors on paper, but on the field, they are slain without much of a fight.

Over the years, CPL has seen some flashes of brilliance from youngsters like Pooran, Santokhie and Cottrell. One should expect that CPL would serve as a scouting ground for new talent on the West Indies Team- but it’s clear that the WICB selectors take annual naps during this period.

Why they do so is anybody’s guess. Probably because their favourite quote is “caught napping”, their own form of dismissal in the game.

I am yet to see these guys be given proper chances to prove themselves in maroon.

What then is the purpose of CPL?

Based on my observations over the past five years, the following list is some of the probable purposes of the franchise:

To give the players that the WICB will never select an opportunity to play for their fans on local soils.

To give cricket fans a chance to see some cricket.

To give wannabe cricket fans an opportunity to pretend they like cricket. This, however, can be debated

To give cricketing countries an opportunity to fight over whose stadium is bigger and better to host the finals.

To give the Caribbean people another reason to party. This is, as if, they already don’t.

Regardless of the purpose, it is clear that CPL has found a home in the hearts of cricket fans and wannabes alike.

To say it is successful financial wise maybe be questionable, but with any venture in the Caribbean, we, the people, will milk it for all its worth- for as long as we can.

With the games of 2018 set to bowl off in a week’s time, one thing is certain: massive fanfare. 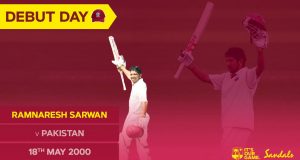 May 18, 2000: When Ramnaresh Sarwan Arrived And Immediately Made It...

Dev Tyagi - May 18, 2020
1
You can ask Sachin, talk to Kallis and Ponting and pick Lara too. Simply ask about the most difficult bowlers they faced during their time. All of...