Even before the toss has happened, probably some have decided the verdict of this keenly-anticipated Test series.

All said and done, the Indian team is going to play what could be a potential challenge to reverse its fatal outcome against England in 2014.

Who can forget that, ever?

After its recent T20 series win, the Indian team lost the ODI series 2-1. After a gap of 15 days, a sufficiently rested and equally acclimatised India play the First Test at Birmingham.

August 1 may be an ordinary date for most of us. But for captain Virat Kohli- it’s his maiden assignment to lead India in England.

The last time when India toured England, India won the match at Lord’s and took the lead of 1-0 but had to endure the ignominy of losing the remaining matches. The verdict was out in bold- the series lost 3-1.

In 2014 series, the Indian team’s batsmen’s failure was the main reason behind India’s loss in the series. What else could you possibly blame the torrid outcome to?

In that series, Virat Kohli didn’t score single fifty. Did he see that coming? In fact, did his detractors imagine something like that? Virat Kohli, then in England was like a plant that someone had forgotten to water.

He scored only 133 runs in 10 innings where 39 was his highest score. Here’s the worst part of its all where Anderson and Broad took the Mickey out of a charismatic batsman.

Virat Kohli got out for a single digit score in 6 innings. His failure put Indian batting under pressure. Also, it didn’t help that Pujara wasn’t doing his bit, the usual tenacious stuff and being focused and all that.

The famous number 3 batsman’s best score 4 years back was a very modest 55. He couldn’t even reach 225 Test runs then.

Of course, things have moved on since then and so has Kohli, who’s been in a fantastic run of form by his usual high standards.

But rewind the clocks a little bit.

After his failure in England series, Virat Kohli was in remarkable form in the Australia series. It was around then that he was appointed the captain of Indian Test team after Dhoni’s retirement during the Australia series. None saw that coming- but it was a pleasant sign. After contributing boldly to Indian cricket for so many years, even in the 5-day format, Dhoni had passed his baton.

Under Virat Kohli’s captaincy, India won 10 Test series whereas they lost only one series against South Africa. In between, they drew against Bangladesh in the last three years.

In this period Virat scored a phenomenal 3599 runs in 38 matches with 15 hundreds and 7 half centuries.

Give it to critics who revile the man for his lame aggression. He’s also got the numbers to back up the bravado.

Also, lest it be forgotten, he scored four double centuries in this period.

As far as his current form is concerned, Virat Kohli will play the part of a key lynchpin in this series. In the last series, Virat Kohli failed against English seamers so his performance will depend upon how he played English seamers; the usual suspects Anderson and Broad then.

But this time there’s also some concern.

It won’t be all that easy for Anderson and Broad because they will not only charge into bowl at an in-form Virat Kohli but have aged a bit, especially Jimmy Anderson.

That said, here’s what Kohli would be mindful of. Of his 540 Test scalps- 86 have come against India. That’s a compelling run of form- isn’t it?

During the 2014 series, Virat Kohli faced what could be described a blithe of a decade-long career that’s taking shape every single day.

A lot happened then and caused familiar repercussions- the ICC Test rankings drop and all that Jazz. However, India are the numero uno side once again in a format where they aren’t entirely giant killers.

To that regard, if India are to hold back England and launch their own batting avalanche then the team will have to step up and not just rely on Virat Kohli alone.

That would be unfaithful of the rest, isn’t it?

To win the series and that too in England, Indian captain Virat Kohli requires support from all the departments. This primarily means that the Indian batting depends on Murali Vijay, Shikhar Dhawan, Cheteshwar Pujara, Ajinkya Rahane and KL Rahul. Can they attack in tandem?

Even if 3 among these illustrious names happen to excel- we may have a great contest at our hands. Add Kohli’s attacking style to it and you’ve got a batting Calypso unleashed.

It will be worthwhile to see how Ravi Ashwin and a returning Ishant Sharma lead the bowling attack. Could this be their key opportunity to remind the side about their utility at a time where much of the bowling has only been about Bhuvi and Bumrah?

Kohli- your mission, should you choose to accomplish it, involves going out there and doing all you can. Believe! 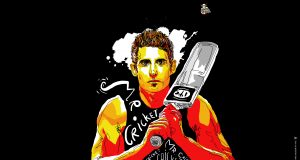 Dev Tyagi - May 27, 2017
2
Surely, Michael Hussey doesn't need to sign a cheque using his full name. Or even his initials for that matter. Just the nickname would do. One...