26 of India’s 130 runs in Lord’s second innings came from Hardik Pandya’s bat. India lost, they were meant too, perhaps the ominous dark Lord’s clouds had it in the writing in the black skies. He’s often criticised for being a bit over the top and also enjoys a strong support. Few players could be as polarised in the current Indian side as Pandya.

Here’s an understated truth of sorts.

Pandya made his debut for India in T20s and ODIs in 2016 and was called to the Test squad in 2017. Arguably so, Pandya is still a newbie to Indian cricket and as such, he still has time to prove himself. Lucky for him though, his place on the team is almost guaranteed as he and Pujara are the only all-rounders on the team.

When compared to his hairstyles, Pandya’s statistics could never measure up to this interest level. While his strike rates for ODIs and T20s are above 100, the batting averages are less than desirable if he wishes to make himself a permanent and dependable fixture on the squad. With that being said, a maiden century in tests and a healthy 83 in ODIs shows that he has promise and potential. With time, practice and proper mentoring, Pandya can secure his place on the team and give the fans innings as unique and interesting as his highlights.

As far as wickets go, his economy rates are pleasantly average and his four-wicket haul sits pretty by its lonesome self. With 33 wickets in T20s equals his high score in the same format of the game, he also boasts a fabulous average of a wicket a match with 40 wickets in 40 matches. Whilst I believe that Pandya is more interesting playing for Mumbai Indians than he is playing for the Indian national team, I am the first to admit that there is room for exponential growth is he is both young and promising.

But to say that he can replace Dhoni as a world-class finisher, I am very doubtful. To be a world class finisher as Dhoni, one must practice control and calmness under pressure- traits that undoubtedly come with time and maturity- two things that have not yet come to Pandya. But we can’t fault his youth. What we can do, however, is to not apply the pressure of becoming the next Dhoni- as these shoes are seemingly too large for anyone of this generation to fit in.

As with anyone born on October 11, our greatness only comes with time and hard work- so it is my hope that he understands the gravity of his birthdate and the potential that he has to be unleashed. With this understanding, he can prove himself- not as the next Dhoni but as Hardik Pandya, one of the greatest all-rounders of the Indian Cricket Team. 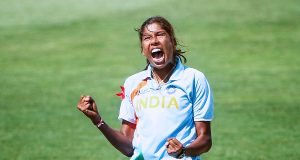 Dev Tyagi - May 11, 2017
4
In a country where the surname Goswami spruces up an immensity of sudden reaction that you might not be accustomed to seeing, remotely connected...