It was in 2008 when this lanky speedster broke into wild celebrations as he claimed the final South African wicket to give India U-19 the World Cup title under Virat Kohli. Yes, we are talking about Siddarth Kaul, India’s new-found seamer. After years of grind in the domestic circuit post that, he waited long and hard enough to break into the Indian team. His performances never dried up.

But became stronger for Punjab, India A and subsequently the IPL. A decade to that win later, he finally made his well-deserved debut for India against Ireland in the T20Is and the ODIs against England a month back.

Siddarth Kaul opened up about his dream come true moment, that special MSD moment, and much more in this exclusive chat with the undersigned.

How does it feel that years of hard work has finally paid off?

It feels absolutely great when you get a chance and you are able to perform. It was a tremendous opportunity for me. I was really happy and gave it my all. I never thought of getting a chance to play, I was just happy being in that dressing room with the players I have seen and looked up to. It was a great, great feeling, but now the target is to work hard ever more and sustain myself in the circuit.

Describe the moment when you received the India cap.

I was quite nervous. My happiness, then, was beyond words. Mahendra Singh Dhoni handed over the India cap to me. It was a great feeling that I can’t explain in words. I was literally on cloud nine.

What were you going through when you were about to bowl your first delivery?

I was again feeling very nervous. It’s not that I haven’t opened bowling before. But when you do it wearing your country’s jersey, the feeling is different and it really was. I was a bit anxious in my first over. But thereafter, I felt at ease after getting a wicket and from there on, it went very smooth.

How was your interaction with skipper Virat Kohli and MS Dhoni?

Both of them shared their experiences. In fact, everybody pitched in to say some words of encouragement, how to manage things and how I have been doing it. Virat also said the same thing. The thinking of the entire unit is along the same lines. He said just follow what you have been doing in IPL, “Kuch Alag Nahi Karna Hai” (don’t do anything different).

Follow your capabilities and stay relaxed. They were all extremely supportive.

Are you eyeing the World Cup spot as yet?

I have not set any targets as such. I am keeping it pretty simple. Even before the selection, when I was following my routine and process, I never thought about the Indian team or the selection matters. All I want is to give my best and I just keep thinking about that. I do not worry about the selection. I am confident that I will get selected at some point. So I just choose to enjoy the moment and not worry about something that is about to happen.

How do you plan to break into Test cricket?

It is something that I am not thinking at all. Also as I said, my job is to play well day in and day out, and that’s what I am currently doing. If they pick me, I will perform, give my 110 per cent as I always do and repay their faith in me. Even if I play for my state or India or the five-day format, I just want to think of getting wickets for my team. I have to achieve that target.

How did your parents react to your success?

My parents have been amazing supporters. They were happier than me. They called me and were in tears after I played my first match. I also got emotional, I just can’t explain. They are proud of both of us, me and my brother. They have worked so hard, and so has my brother and I believe in the process, I have got my share of chances. I thank my family and God for giving me such opportunities and such an amazing support system.

What is your long-term goal now?

I have no thoughts about that. I just focus on the next assignment that is about to come and try to do well in that. I came from the tour of England, and my physio and trainer from the Indian camp asked me to go to the NCA camp, so I was training there. I am leaving for Vijayawada tomorrow for the quadrangular series for India A. I do not think ahead because I feel if you keep that in mind, you will lose concentration of the task at hand. That’s why I keep it simple.

Is playing for India the best moment of your life so far?

Obviously, there are no doubts about it. Anybody getting his debut cap from the great MSD would be so lucky, and I am grateful for that. In a country of crores of people, you are selected in the playing eleven. You have an opportunity to serve your country and wear that highly respected blue jersey and carry the India logo on your chest. It’s simply unbelievable.

Do you have any superstition about the headband?

Not at all, it’s no superstition or that I wear on somebody’s demand or suggestion. It’s just that I sweat a lot, so I prefer to have it on. 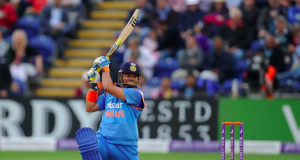 Anuj Prabhu - August 17, 2020
0
The first Indian player to score a century in all three formats of the game, Suresh Raina has been one of the cleanest hitters...