The World Cup Qualifier in Zimbabwe earlier this year featured its fair share of heartbreaks, as the International Cricket Council’s regressive decision to trim the 2019 World Cup meant that only two berths were up for grabs. Scotland came perilously close to qualification, and it can be said that their ouster was a reflection of the closed-shop mentality of the ICC, rather than their own playing ability.

Scotland signalled their intentions at the Qualifier from the outset, as they convincingly beat fancied Afghanistan – the eventual winners of the tournament – by seven wickets in the opening encounter. Considering the presence of the potent Rashid Khan in the Afghan camp, a target of 256 was certainly not going to be a stroll in the park. However, Calum MacLeod, who came in at 16/1, showed no apprehensions at all.

MacLeod proceeded to tame Rashid in a manner that few others had before. The teenaged leg-spinner ended up conceding 68 runs in his nine overs, a far cry from his exploits in the ODI series against Zimbabwe a couple of weeks earlier. In one of the finest innings of the year, McLeod struck an unbeaten 157 off 146 balls, and his third-wicket partnership of 208 with Richie Berrington (67) stitched the contest for the Scots.

The momentum of the first game was maintained by Scotland and they finished the group stage unbeaten, following wins against Hong Kong and Nepal and a thrilling tie against Zimbabwe. In the Super Six round, they beat the UAE before suffering their first defeat, at the hands of Ireland. This ensured that their final Super Six game against the West Indies would be a do-or-die clash for either side. The winner went to the World Cup; the loser went home in disappointment.

As fate would have it, Scotland bowed out of contention in the perhaps the harshest way possible.

After bundling the Windies out for 198, they were placed at 105/4 in the 32nd over when Berrington was erroneously given out LBW by umpire Paul Wilson, off the bowling of off-spinner Ashley Nurse. Soon after, with the score at 125/5, the rain stopped play for good, leaving Scotland gutted – the West Indies were adjudged victors by five runs on the D/L method.

Had the fifth wicket not fallen, Scotland would have gone through to their third World Cup, after 1999 and 2015. Unlike the Netherlands, who secured entry into the 13-team ODI league (proposed to begin in 2020) on account of their win in the World Cricket League Championship 2015-17, the Scots are not assured of a reasonably regular diet of international fixtures against higher-ranked nations, which only adds to their marginalisation.
One such rare one-off fixture took place on June 10, when England, the top-ranked ODI side, arrived at The Grange in Edinburgh, hoping for a good workout prior to their five-match series against Australia. The Englishmen ended up getting a lot more than they had possibly bargained for.

The tone was set after Scotland, who were inserted in, rode on a blazing start by their openers, wicketkeeper Matthew Cross and captain Kyle Coetzer.

Cross and Coetzer ran up a stand of 103 inside 14 overs, after which it was that man MacLeod who stole the show again. The 29-year-old batting mainstay fed his craving for big hundreds with a stellar 140* from just 94 balls that took Scotland to a mammoth 371/5. When England, served by a blistering Jonny Bairstow ton, zoomed to 220/2 in 27 overs, it seemed that the relative inexperience of the Scots might just rob them of a happy ending.

England endured a collapse to fall to 276/7, but given their deep batting line-up, Scotland could not afford to relax. Moeen Ali and Liam Plunkett crashed 71 for the eighth wicket before 22-year-old left-arm spinner Mark Watt (3/55) accounted for the former. The scales had tilted once again, and despite Plunkett’s best efforts, England were bowled out for 365 with seven deliveries remaining.

One can only imagine the immense satisfaction and joy experienced by the Scottish players and their enthusiastic fans when paceman Safyaan Sharif had Mark Wood out leg-before to achieve one of the most memorable ODI results of all time. For the record, England went on to blank Australia 5-0. Even after a slew of stinging defeats, the Australians knew that it will not make any difference to their future, their funding or their stability.

For Scotland, and for that matter, all Associate teams, every single match is akin to a knockout, for there is always the pressure of having to stay afloat. The determination shown by Scotland in putting it across England was a testament to the hunger that is possessed by the non-Test nations. Hence, it is nothing but a travesty that despite toppling the best team in the world, Scotland will remain on the periphery of the international calendar in the foreseeable future.

The bottom line is, unless the likes of Scotland are provided with a decent number of fixtures against the established teams, nobody has the right to accuse them of not being competitive enough. The outcome at The Grange amply showed that novelty and vibrancy in international cricket is the need of the hour, and Scotland’s cricketers and supporters deserve a lot more of the same. 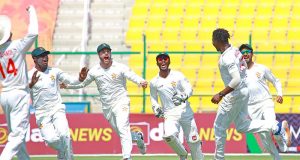