In the winter of 2001-02, India hosted a Nasser Hussain-led England side that looked much more determined and well-prepared in comparison to what was on display on England’s horrendous tour of 1992-93.

The series had plenty of highlights, not always necessary for the right reasons.

Ashley Giles’ negative bowling tactics against Tendulkar in the Tests and English fast bowling all-rounder Andrew Flintoff taking his shirt off after the win at the Wankhede were among the headlines from the series amidst some breath-taking cricket.

Talking of fast-bowling all-rounders, something unusual was happening on the subsequently occurring women’s tour.

A teenager with short hair, all of 5.11 feet, stood out tall among other team-mates, making it was a rare sight in itself. But the real showstopper was the immediate impact she had in the ODI series picking crucial wickets at the top which helped India win the series comprehensively. And this marked the beginning of an unbelievable journey of Indian cricket legend, Jhulan Goswami.

Born in Nadia, West Bengal, it was natural for Goswami to develop an interest in football at a very early age. It was during the 1992 World Cup that Goswami was charmed by the glitz of the game called cricket. One can imagine a 10-year-old Jhulan glued to her television in a small town called Chakdaha in Nadia, watching the likes of Allan Donald steaming in and bowling at the rate of knots, eventually modelling her own bowling style reminiscent to that of the guy they call white-lightning. But what must have really sparked an interest in her to take the game seriously was her trip to the Eden Gardens to watch the finals of the Women’s World Cup in 1997. Her journey to the top wasn’t that easy though.

Coming from a typical middle-class background, Goswami had to battle between her aspirations and the demands made by her parents in terms of her education. Managing to overcome such obstacles probably made Goswami showcase great endurance during pugnacious situations over her 18 years’ long career. Over this span of time, Goswami achieved some incredible heights few cricketers have managed to reach.

Her ODI career blossomed right from the word go, but her finest hour in tests came in 2006, when she displayed her all-round skills, scoring a half-century as a night-watchman in the first test and picking up a 10-for in the second, helping India register their first ever series win in England. Perhaps her greatest feat came a year later when she bagged the Women’s Cricketer of the year award, till then no male Indian cricketer had won an individual award. In 2008, the Chakdala express took over the captaincy from Mitali Raj and took India to many memorable victories over the next 3 years. She bagged the honours of the Arjuna Award and the Padma Shri in 2010 and 2012 respectively.

Goswami is currently the leading wicket-taker in the women’s sphere of ODI cricket. She’s also the first to take 200 scalps. Her contribution towards Indian cricket undoubtedly has been enormous, encouraging young Indian girls to take up the sport professionally, but she is also been looked upon as a role model by plenty across the borders and the other cricket playing countries.

Goswami’s story of success is a concoction of belief, sheer hard work and adaptation. Generations of cricketers have passed and cricket has changed aplenty, but 2 things that have not changed is her, the passion towards the game and winning games for her country. She is definitely one of the great ambassadors of cricket and an inspiration to millions in India and across the world.

With her retirement from T20s, Goswami is coming to the fag end of her illustrious career passing the fast bowling baton to the likes of Shikha Pandey, Mansi Joshi and Pooja Vastrakar, who should take advantage of Goswami’s presence around them and learn tricks and trades in order fill her really big boots in the future. 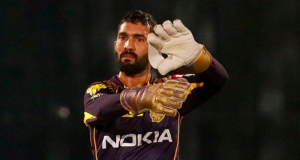 Dinesh Karthik, One Who Emerged Irrepressible, And Prompted Us To Correct...

Charudatt Prabhu - June 1, 2022
0
"If you believe yourself, everything will fall into place!" (Sparkles emoji) "Thank you for all the support and belief...the hard work continues..."