The India vs West Indies series in 1948 was about as different a series to the one to be played in Rajkot as is chicken curry in taste from a Danish pastry.

It was hot and spicy, it wasn’t cold; it had players- on both sides- that played attacking cricket with a voracious appetite for destruction.

As India prepares to host the West Indies for the first Test which begins tomorrow (4th October) at Rajkot, here is a flashback of first ever Test series between two nations which was hosted by India.

West Indies achieved the Test status in 1927 with the inaugural match against England at the Lord’s. After five years, India entered the international arena at the same ground against the same opposition. Post the debut at Lord’s, Both the teams enjoyed their skirmishes with England and Australia and it was in November 1948 that the latest entrants decided to play against each other.

For India vs West Indies series in 1948, the Caribbean team arrived at Lala Amarnath-land for a five-match Test series.

Alongside India, they toured Pakistan for two first-class matches and were scheduled to play against Ceylon (Sri Lanka) before they returned home. West Indies had already defeated both England and Australia in Tests while India was still waiting for its first win. The first Test of the series was hosted by Delhi, the capital of independent India. This was also the first match to be played on the Feroz Shah Kotla ground, Delhi.

The West Indian selectors due to a pay dispute did not select Frank Worrell and John Goddard assumed the leadership for this tour.

India’s primary captain Vijay Merchant also had to step down due to a groin strain and the Indian selectors appointed Lala Amarnath as the skipper. Goddard won the toss for visitors and opted to bat first. Since this was a legendary occurrence in its own right- India vs West Indies series in 1948 being the first of its kind, thoughts were divided between who might prevail.

India had a flying start with C Rangachari taking three quick wickets, one of which was George Headley. Known as ‘Black Bradman’ at his peak, Headley was a pale shadow of himself in 1948 and this was his only inning on the tour. From 27/3, wicket-keeper Clyde Walcott and Gerry Gomez resurrected the innings by scoring a century each. Batting at number seven and eight, Everton Weekes and R Christiani slammed their individual hundreds as well to carry West Indies to a mountain of 631 runs.

In reply, India was struggling at 249/5 after solid knocks from the Bombay duo KC Ebrahim and Rusi Modi, and the captain Lala Amarnath. Hemu Adhikari batting at number seven scored an unbeaten 114 to take India to a total of 454. West Indies enforced the follow-on as the deficit was greater than 150 runs but India managed to bat out the fifth day and saved the Test.

There was a gap of one month between the first and the second Test as West Indies crossed borders to play a mini-tour against Pakistan. The matches were played against Sind at Karachi and Pakistan XI at Lahore both were drawn affairs.

Remaining matches in the five-match series followed the pattern of the first Test. West Indies batted first in all of them and managed to score mammoth totals in all but the final Test. While the next two Tests at Mumbai and Kolkata were drawn, India conceded a defeat by an innings and 193 runs in the fourth Test at Chennai to go down 0-1 in the series.

Hero of West Indies’ tremendous success in the first four Tests was Everton Weekes. His scores in the first four Tests were 128, 194, 162, 101 and 90. Including his 141 against England in the match before the India tour, Weekes had scored five consecutive Test centuries in five innings, a record that stands till date. He was run out on 90 in the fourth Test and scored 56 and 48 in the final Test to complete the series with 779 runs from five matches at an average of 111.28.

The final Test at the Brabourne Stadium, Mumbai was an eventful one. West Indies batting first managed to score only 286, their first below-300 score in the series. India’s wicket-keeper Probir Sen was injured, and Captain Lala Amarnath donned the gloves, despite the West Indian captain allowing him a substitute wicket-keeper. Amarnath had previously refused his opposition number a similar concession and hence assumed the wicketkeeping himself.

India crashed to 193 and conceded a 93 runs lead. West Indies was all out for 267, setting India a target of 361 runs in around 108 overs to equalize the series. The Indians sensed the opportunity of their maiden Test win and went after the target. Vijay Hazare scored a magnificent 122 while Rusi Modi supported with a valiant 86.

West Indies, not wanting to concede defeat, employed time-wasting tactics and were duly criticized for the same. Clyde Walcott, the burly wicketkeeper, faced the greatest ire with his act retrieving the ball from the boundary ropes with a casual walk whereas other fielders could have run quicker than him.

All these unsporting moments robbed cricket of a classic thriller. When the play was halted on the last day, India was just six runs away from the win with its last pair batting. All three results were possible and it was a great pity that the inaugural tour in independent India ended in this fashion.

Everton Weekes was clearly the standout performer in winning the series for West Indies while Rusi Modi (560 runs) and Vijay Hazare (543) were the lead run-getters for India. Prior Jones and Vinoo Mankad were the joint-highest wicket-takers with 17 wickets in five matches.

It took 20 Test matches in next 23 years for India to register their first Test win against West Indies.

India stand undefeated against West Indies in Test cricket since 2002-03. In that span, the Asian team has won 10 matches while nine Tests have been drawn. 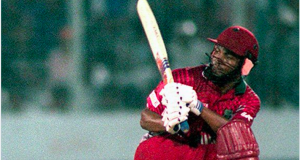 This Date, But That Year: Recollecting Brian Lara’s Stormy 117 v...

Prashant Banjare - October 9, 2022
0
Every batsman in this great game of ours has his own style. Some have one that's perhaps more...