It is often said batting average decides a cricketer’s pedigree and the number of hundreds one scores defines greatness. While this argument holds true in most cases, it doesn’t quite stand true for say, someone like a Faf Du Plessis.

When Faf’s batting, you don’t think of his average- do you? There are cricketers you’d forget for enduring an average series because they are, well, just so pleasant looking to follow.

That cross batted striking that attracts, an unorthodox, not strictly out of the copybook batting stance pointing to say the third slip and then when bowled short at, the ball disappearing over widish mid-on!

When Australia ran into Faf at Hobart, the hundred that South Africa’s captain struck, was the final accompaniment of the batsman. It so happened that he went on to strike the three figures. Throughout his stay, the right-hander being dismissed only in the death of the death overs, you concentrated on his batting; on those flat sixes, punchy boundaries and, gosh, that one-handed swat over deep extra cover for six.

Did you worry when Lara or Sanga had an average series? You knew he’d take one damn attractive knock to get back into his groove.

Same for Faf, despite his batting not possessing the flamboyance that Lara’s had. The way he batted against, well, not the easiest trio out there- Hazlewood, Starc, Cummins- in the final, you couldn’t take your eyes off him.

And probably, in here lies his key; that Faf magic. He transformed himself from being this thespian of swashbuckle into being a Shivnarine Chanderpaul-like mid-inning crawler in the series at Sri Lanka. The big shots in the Tests just didn’t come. With half of his side collapsing in front of his own eyes, where he became, a dogged man, happy converting ones into twos.

It wasn’t that pleasing to the eye. And when the opportunity came to express himself on what seemed a damn good batting surface, the old Faf was back.

When it comes to South Africa’s captain, you admire the machismo of a very attractive cricketer.

You are stuck by a very physical presence and its dominance on the crease overpowers everything else.

That Faf was in his element wasn’t the only value for the fan.

That he was hitting Australia out of the ground along with Killer-Miller at the other end was like seeing two golden jubilees in the cinema hall at the price of one.

Here’s what stood out for me, as a fan.

When one looks back over the years in cricket, certain names like Sobers, Lara, Akram, Sachin, Warne, Kallis will all come to the mind in a flash, and this will all because of there obvious brilliance. Then you get players who may be less talented in terms of actual cricketing skills but have put an everlasting impression in the cricketing folklore by their sheer resoluteness.

Faf Du Plessis is an epitome of all that a cricketer needs to be at an international level when the going gets tough.

He’s not the world’s best batsman. In fact, he has been denied the entry into the so-called Fab Four. Maybe the Hobart ton was a wild-card entry into that elite league.

The way Australia fought back in the previous game, to the Proteas, the signal was clear. It was do or die. Something special hat to hit the surface. So it did. So Faf did answer with the bat.

People may feel in awe of the great AB De Villiers and again for obvious reasons but Faf Du Plessis has been the real deal for the proteas.

Everyone thought AB would be the right person to lead the Proteas after Graeme Smith retired. But the country had lost its favourite cricketing son to the sidelines.

It was then that Faf stepped in and is since leading from the front for the South African national cricket team. To this point, you don’t feel that Faf’s under pressure.

Need proof, here’s some. How often have you seen a host captain offering a bear hug to his opposite number at the start of a very crucial Test series?

Just prior to the start of the India vs South Africa series, Faf, upon the completion of the toss, offered Kohli a hug. There was no acting there. There was nothing in it for him. Just this happy exposition of grandeur; just being who he was at that point of time, no complications, being absolutely chill.

As a Test captain, he took his team to Australia and recorded yet another series win to the disgust of the Aussies.

They threw whatever they could at him both on and off the field, but like his calm persona, he was pretty much unnerved by all he was dished with.

He led with conviction and displayed great resilience when he battled his way to a century in the day and night Test when all around him were falling like ninepins. And then declared on the 1st day itself with just 259 runs on the board to catch the opposition off guard and have a bowl at them under lights. Faf always likes to be one step ahead of the opposition and this Hobart knock was just another example of being just that.

All of this after he was harassed by the Australian media for his ball shinning technique in the previous Test, the resoluteness was pretty apparent for everyone to see.

The relatively soft-spoken, always ready with a smile kind of a person, Faf Du Plessis’ career with South Africa may not last post the 2019 World Cup. There is a great chance that he may well be part of another spectacular South African choke. After all, they haven’t left much to anyone’s imagination.

But just like one shouldn’t count the eggs before they hatch, Faf Du Plessis’s South Africa shouldn’t be so cruelly undermined. Should they?

Faf may well be the first person to finally get the monkey off the Proteas back and win them the World Cup.

It may well be an appropriate final act for a cricketer who has been a rock-like figure for his team and been a huge part in some of the most entertaining cricketing moments in the past few years. 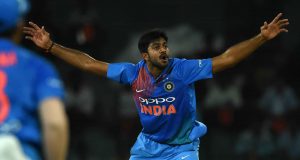 Has Vijay Shankar Ended India’s Search For A Genuine All-Rounder?