Just a few days back, 26-year-old Dhruv Shorey was batting on 94 against Himachal Pradesh, closing on the heels for another first-class hundred with his state, Delhi being in a strong position to clinch their first victory in the Ranji Trophy season 2018-19.

The tea interval on the third day was around the corner, and more importantly, Delhi with a little over 360 runs lead in the game, Shorey was sure that he didn’t have much time to get to his fourth first-class hundred.

In lieu of this, Shorey decided to go the long way as he ran down the wicket and lofted the ball over long-on fielder for a massive six.

The red cherry found the sweet spot of the bat and was deposited into the stand. Shorey, who missed out on a well-deserved hundred in the first innings by just 12 runs, took a deep breath whilst trying to sink in that moment.

That powerful shot was applauded by his teammates; all he did was offer a small glance towards the sky, thanking the almighty. His sensational effort on the field led him to the Man-of-the-Match award, which wasn’t a surprise to many.

So, what’s in the tank for Dhruv Shorey?

His uncharacteristic restlessness on the field has helped him to be consistent in all three formats of the game. Starting his Ranjhi-Trophy career in 2015-16, Shorey has come a long way and has evolved as a batsman. His ability to roll over an arm when needed by the team has held him in a good stead.

With Gautam Gambhir stepping down as the captain, the selectors have shown faith in Nitish Rana and Dhruv Shorey to take the legacy forward as the captain and vice-captain respectively.

Being around the set-up for a little over three years and getting to lead from the front speaks a lot more about Shorey.

The blend of dedication and grit also helped him with an Indian Premier League (IPL) contract. Though he only featured in a game against Royal Challengers Bangalore this year, the franchise has shown faith in his credentials as the title winner Chennai Super Kings have retained him for the upcoming season.

His retention under Mahendra Singh Dhoni’s leadership will only make the knife sharper and the talent only more worthy of his salt.

Further, if we rewind the clock and see Dhoni’s approach in the matches he has played as a captain so far is — ‘He backs his players’. And if Dhoni thinks Shorey is one of them then one has to believe that the Delhi lad has something extra.

Representing his country is still a task on Shorey’s hand.

Having age and form on his side, it won’t be a surprise if he actually manages to find his way into the Indian squad. Is this the talent we’ve been looking for?

Post-2019 World Cup, the selectors will start looking at some new talented young faces. It’s then where Dhruv Shorey will be expected to go all in and produce what he is capable of producing.

He is a technically sound bat and can prove to be a fiery middle-order man for India across all three formats.

That should keep doubters at bay.

While most of his success has come playing the red-ball cricket, his stance, movement, and hand-eye coordination are enough to bank on him.

There’s still a long way to go for Dhruv Shorey.

But the quiet looking Delhi-lad is letting his bat shout loud. It will be interesting to see if he is able to capitalize on this form and continue the dream domestic stint.

Who knows, the India call-up might be just a step away. 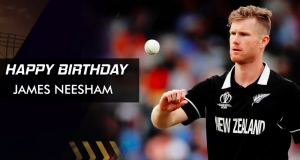 Jimmy Neesham: The Unflustered All-Rounder With All It Takes To Be...