In the checkered and blingy world of wrist spinners in the present context, finger spinners are sadly seen to be languishing at the rock bottom. Cricket as a sport invariably witnesses changing dynamics in a specified epoch. Power hitting in the cricketing milieu isn’t something unnatural and unforeseen.

But, the glorious advent of wrist spinners has been a celebrated event which has largely affected the way in which the game is getting played and even strategized. Kuldeep Yadav, Ish Sodhi, Yasir Shah, and Yuzvendra Chahal form the crux of the latest spin revival.

So, does it sound the death knell for off spinners?

Too early to say that probably.

Mehidy Hasan Miraj from Bangladesh is slowly but surely rising up the ranks thereby building up lots of expectation from a country which is predominantly known for producing left-arm orthodox spinners. In his short career so far, he has shown good control over his skills and has also emerged as a clever operator who seems unfazed when he is attacked by opposition batsmen.

His stellar performance in the 2016 Under 19 Cricket World Cup where he led Bangladesh earned him the player of the Tournament award. So, it is quite natural that he is being touted as the man who can do the job for Bangladesh both with the bat and ball in the times to come.

And going by his career statistics so far, he has certainly lived up to the expectations. His 69 Test wickets have come at an impressive average of 33.20 which includes one ten-wicket haul and 5 five-wicket hauls. Bangladesh’s recent surge of good performances has raised the bar for the young Bangladeshi performers like Miraz and the others to follow.

His gritty performances with the bat make him an indispensable part of the Bangladeshi set up especially in the event of Shakib Al Hasan’s fitness issues.

His debut test series was nothing short of a fairy tale where he bamboozled English batsmen with deception and guile in familiar conditions at home. In his maiden test appearance, he emerged as the youngest Bangladeshi bowler to take a five-wicket haul. His 19 wickets in the two test matches earned him the man of the series award and also justified his presence in the Bangladesh side.

With the 2019 World Cup around, Bangladesh can dare to dream of something spectacular to happen as they have a fearless batting unit led by a gutsy captain and a wily off-spinner, Mehidy Hasan.

If Mehidy keeps on performing in the way he has been, he would reinstate the position of off-spinners and could also script some memorable victories for Bangladesh.

He may not have a repertoire like that of Ravichandran Ashwin but Mehidy Hasan is an exciting prospect for sure. There’s also reason to believe that he will stick for long and get along fine. Who wouldn’t under a captain of Shakib’s class and experience.

In fact, with growing competition within the team- the likes of Taijul Islam and Shakib going strong- if, for anything, Mehidy would be pushed to elevate his game further. 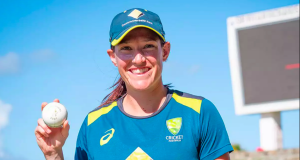 Why Megan Schutt, A Sorcerer With The White Ball, Needs To...

Dev Tyagi - March 7, 2022
0
Cricket is a team game that thrives on individual performance. The fact is so true and been relevant for such a long...