A firing hundred by Villany, an ecstatic knock by Devine, true to her name and powers of concentration, a heartbreak for the Renegades, and some explosive bowling display- the first week itself of the WBBL 2018 was full of thunder.

But what performances counted the most? Who turned a corner against whom? Let’s find it all here.

The opening match saw a revival and a return of the team called Hobart Hurricanes. They fought well as a team with all-round abilities. Redmayne, as expected, delivered the solid start complemented by the furious knock from Erin Fazackerly for the Hurricanes as they post a commendable target of 143 runs on board. Hurricane’s score in the opening encounter is the highest score thereby beating its previous season’s high score of 130 runs. Scorchers on other hand had only Heather Graham contributing with wickets, as she made her dream debut by picking 3-crucial wickets to keep the Hurricane’s newly found audacity at bay.

Having put to defend an achievable target, Hepburn brought in an early breakthrough as the new Captain is edged by the brilliance of her length and in-swing delivery. Villani swiftly batted in a crunch situation, thereby bringing the 1st fifty of the tournament.

As Villani the set batswoman’s wicket fell in the 15th over, Scorchers looked craving into a deeper trouble. In the Final 5 overs, Hurricanes ultimately couldn’t hold their nerves, as it seems to be extremely visible that a few bowling and fielding lapses had cost them the match.

The 5th wicket partnership between Ebsary and Piparo turned the match away from the grasp of the Hurricanes. Ebsary was the key player to get them to the finish line, while bowlers like Meg Philips, Sasha Maloney, and Burns collectively shown the intent to prove destructive with the bowl. Elyse Villani was adjudged the player of the match for her promising fifty. The opening match had all elements of grit, intent, and competitiveness at its best.

The defending Champions Sydney Sixers faced a major upset with a solo batting show of the Proteas Lizelle Lee. Sixers crumbled there after scoring 108 runs under 12 overs, where they lost 5-wickets after that. Perry and Healy took the opening duties and each of them scored a fluent fifty to their name. The rest of the wickets could only manage to score 15 runs, whereas McGlashan remained unbeaten with 14 runs. Hancock picked her career best-figures with a 4-fer with an economy under 6.

Then it was dominated by Lee’s show all the way from the start until the end. Lee amazed a magnificent ton to her name with all grace and power to stun the defending champions. Sarah Aley the experienced pacer faced the fury of Lee’s knock. It took Sixteen Fours and Three Sixes to notch such a supreme ton and power the Stars to a massive win. In the dashing opener innings, up to 80% of the runs were scored by charging down the pitch and using the footwork to perfection.

Sixers batting is still a concern as the major runs are seemed to be contributed by the Opening batters only, the rest of the team have to show their will to stack up runs. Lee was adjudged the Player of the match for her stunning ton in just over 60 balls.

Stars have shown that they have arrived with all the cricketing artillery loaded.

DEVINE AND THE BOWLERS OUTSMART HEAT’S WITH A CLASSIC WIN

ADELAIDE STRIKERS struck powerfully to outsmart it’s opponent with an all-round performance to keep the Heat’s in amusement.

Thanks to a rapid 89 by Sophie Devine, Strikers comfortably posted a cracking total of 172 runs. She struck 6-fours and 5-sixers to her name. Barsby picked a couple and had 2 run-outs in the opening innings. Strikers notched up 100 runs in just 12 overs, then racked up 72 runs in the following overs. Devine was involved in two 50-runs partnership with Patterson and McParlin to post a total of 172 on board.

Following it, Heats were under the pressure of the strikers bowling attack lead by Shutt and Coyte economy under 6 per over. Though the Strikers could pick only two wickets, the total was too huge for the heat to score when 110-runs was required the last 10 overs. The fifties each by Mooney and Short went in vain as they couldn’t pick up the pace in the nick of time.

RENEGADES CRUMBLE TO A MARVELOUS THUNDER

Melbourne Renegades proved no match for Thunder’s Swashbuckling show with the ball. Blackwell introduced seven of her bowlers, which turned out to be fruitful for the Thunders one-sided assault. Among the 7 bowlers Farrell, Gibson, Bates, and Griffith picked a wicket apiece, whereas Farrell struck thrice as she ripped the Renegades batting order with ease. Taylor, Bates, Farrell, and Gibson the core bowling squad were economical with the ball of just allowing under 5 an over as Renegades posted a total of 98.

With an easy target to chase, Thunder reached the score in the 17th over. Haynes and Stanleberg scored 27 and 26 respectively to reach the modest score of 98. Renegades even gave a rare scare by picking 4 crucial wickets during the course of the match, where the T20WC star Tayla Vlaemink starred in the losing cause with a 4-fer (4/30). However, Thunder’s supremacy had its say, without a doubt a screamer taken by Carey was the best part when it came to the fielding department. A team effort in its Bowling and regain of a tough scare in the batting line-up, there is still areas where Thunders have to work on.

//With many of the foreign recruits who are set to join their respective teams this weekend, WBBL 2018 will expected to hopefully witness another record-breaking season ahead.// 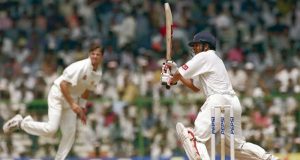 When Sachin Led The Demolition Of The World’s Best Test Unit...

Omkar Mankame - March 6, 2019
0
Those present at the Brabourne Stadium on 25th February 1998 witnessed an onslaught which none would ever forget. It was only a trailer of the upcoming action-packed blockbuster, but it was the spiciest...