Nobody would have known it better other than his father Rod Latham for whom his birth came as a welcome relief.

Tom Latham arrived at the back of a defeat for New Zealand from which an entire country would not recover.

The country’s finest batsman Martin Crowe was lost. A country was numb. There weren’t many words to exhibit one of cricket’s monumental loss.

Fast forward to 2018, December. Truth be told, one does feel that had Martin Crowe been there, watching the game live, witnessing the enthralling saga wherein a dogged Tom Latham raised his bat to acknowledge the love of fans who’d gathered to see his double hundred, he would’ve joined his hands in great joy.

But back then, Rod had tried to fulfill his dream through his younger son Tom.

Tom Latham used to play cricket in his home backyard with brother Matt, although his ultimate dream was to be part of the All Blacks, the greatest team in rugby’s history.

Today, as one’s seen that 489-ball knock, one that came in nearly 700 painstaking minutes that were spent batting, it feels, Tom did the right thing, in choosing Cricket over Rugby.

It was at 15 where he would be selected for that age group to represent New Zealand where he decided to pursue a career in cricket.

He was only 18 when he played his first-class game for Canterbury in 2010-11 and showed a glimpse of talent with a fighting inning of 65 of 143 balls against a quality Central Districts attack.

It was a brief exposure of some skill with batting that has yielded, at only 26, nearly 5000 international runs, including 11 hundreds.

The national call followed soon in February 2012 when he played his first limited over a game against Zimbabwe and Test debut against MS Dhoni’s men two years later.

He was 19 and 21 years respectively, much younger than his father who got a chance quite late, at 30.

However, it didn’t mean that Latham had everything easily he had to fight to prove his worth to his country, to his team and fans.

While he played from number one to nine in the One day team initially, it was the Indian tour in 2016 where he became a settled top order player.

In those punchy drives off Bhuvaneshwar Kumar and some resilient batting against Ashwin, it became clear that Tom Latham, who was only in his maiden India tour then, was a find for New Zealand.

He could do both: hit the big shots and yet, keep calm and put his head down to the wicket.

However, his record in Test matches is much more impressive and in his short career, he has played some resolute knocks that have taken the opposition off the guard at times.

It’s demonstrated not only an ability to score runs but his penchant to bat for longer durations.

Most would feel that it’s too early to say, but truly, is this a mega misstatement to suggest that some innings of Latham have mirrored the grace and solidity of a Dravid and Chanderpaul?

Haven’t we found dourness of Alistair Cook and class of Jacques Kallis in a young Latham who’s anything but these legends as yet, still promises to go a long way?

But let’s get real.

It is unfair to compare Latham with such greats of the game at such early stage of his career. But he had shown enough signs that he has enormous talent and temperament to carry New Zealand’s cricket future after players like Ross Taylor bid adieu to the game.

His 264* might have come on the batting belter of Basin Reserve but it would be unfair on anyone’s part to dismiss it only because of the nature of the pitch.

During that inning, he had shown that standing on the wicket and buying time is still priceless in modern era. He proved that it’s an art which seems to be perishing as more and more spectators of this great game of ours, as also its practitioners are making love to T20s.

The innings came just a few days before the IPL bidding happened. It was enough to show the commitment of Latham towards the longest format in a way that was somewhat reminiscent to older generations.

His 264 not out is the 28th longest inning in the history of the game (in terms of minutes) and the best ever in terms of runs when we compare it to the batsmen who have carried the bat at the end of the innings.

This is no lame an achievement as Latham overtook some of the biggest names in the game through his dogged effort.

In a star-studded line up where people love to watch Kane Williamson’s cover drive, Ross Taylor’s sexy cut, Trent Boult firing missiles or Tim Southee bowling banana swing, Tom Latham work tirelessly without coming into the spotlight a lot similar to Justin Langer, Thilan Samaraweera and Rahul Dravid. Like Dravid, he has batted right from no. 1 to 9 and have kept wicket for the cause of the team. He has moved up the order to open the innings when asked like the former Indian Captain.

Latham desires to inspire people to take up the game like he was inspired by All Blacks captain Richie McCaw who won two back to back rugby world cups for New Zealand.

He once said of his hero, “He has been pretty inspirational for a lot of New Zealanders, winning two World Cups back to back, and what he has done as a player is pretty cool.”

If Latham can achieve his goals New Zealand cricket will surely be in safe hands in years to come.

In case, you didn’t know: 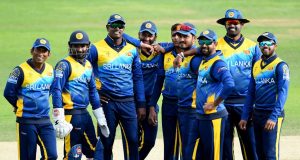 Abhishek Srivastava - October 21, 2019
0
Sri Lanka’s win in T-20I Series on Pakistan Soil is much beyond than the cricketing term; it is reconfirming age-old mantra in sports and...