The All India Women’s Selection Committee has announced the Indian Women’s Cricket team for the upcoming New Zealand tour; which is scheduled to be played from January 24 next year. The team will play three ODIs and the equal number of T20Is; where the three ODIs will be a part of the ICC Women’s Championship (2017-20).

Veda Krishnamurthy, the middle order batter as well as one of the best fielders of India, has been dropped from both the limited over and the shortest format. While it is inconsistency on her part that seems to be the answer, one’s also got to debate whether India have a noteworthy replacement of sorts ready to take up Veda’s role.

To be fair to Veda, it’s tough to doubt that she has been out of form for a while, her single digit scores in the World T20 only justifying her ouster. But, at the same time, it also makes for an interesting possibility to expect the talented right-hander, to bounce back to top form.

Having said that, critics would note that apart from the two ODI half-centuries she struck against South Africa in February and a vital 80 for Railways in the ongoing Senior Women’s One Day League in the domestic circuit, her performances haven’t given fans a lot to rave about.

Mona Meshram, is in for Veda Krishnamurthy, whose exclusion is the only change in the squad that played against Sri Lanka in last September.

Here’s what should excite everyone concerned about and keen on Indian Women’s cricket.

22-year old Delhi opener Priya Punia got her maiden call-up for the T20I squad. Punia has been regular in the domestic circuit for the last couple of years. In 2015, she got the chance in India A squad to play against New Zealand in Bangalore. Currently, she is the fourth highest run-getter in the ongoing Senior Women’s One Day League, including two centuries.

With Jhulan Goswami’s retirement from the shortest format of the game and Pooja Vastrakar’s knee-injury, Shikha Pandey found a place the T20I squad. Vastrakar got injured during the warm-up game in the World T20 and currently healing from the knee surgery. She last played in T20I in the Asia Cup in June but didn’t get selected for the World T20. Currently she is playing in the Senior Women’s One Day League where she scalped 5 wickets in 4 matches and scored 71 off 57 against Punjab.

Devika Vaidya, who replaced injured Pooja Vastrakar in the World T20 squad, couldn’t make it to the team for the upcoming tour. Like Krishnamurthy, her out of form for a while was the reason behind this non-selection.

The 15-member ODI squad will lead by Mithali Raj, Harmanpreet Kaur will be her deputy while Kaur will lead the team in the T20I series where Smriti Mandhana will continue to be Kaur’s deputy. 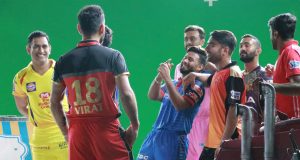 As A Brand New Season Is Already Underway, What Can Be...

Vedant Sharma - March 27, 2019
0
The twelfth edition of the Indian Premier League (IPL) has just begun and is already becoming the ‘night’ three-hour show for the fans. Yes,...