There are three kinds of Windies fans: some have drifted towards basketball and don’t wish to come back to Cricket, some have sunken in gloom resulting from the dichotomy between the present set of players and those of the golden era gone by, some still have hope for a revival and renaissance of Windies Cricket. Those who comprise the third group, for them Shimron Hetmyer is the man who carries the charge of leading the fight back.

There is something about the West Indian southpaws; they seem to make mercilessness seem fashionable. Christopher Henry Gayle has single-handedly created the cult of power hitting and elevated it to such heights that others can only dream about. Hetmyer seems to have taken after Richie Richardson as far as his demeanor and movements on a cricket field are concerned. But, his ability to pulverize the ball with Gayle like force makes him an exciting prospect for The Windies and for the different franchises all around the world.

But, amidst all the expectation there also looms large the danger of another talented Windies power hitter deliberately obscuring himself in the international arena to revel in League Cricket across the globe. No matter in which patch of the world where a T20 League is played, the Calypso kings invariably make it at the top of the wish list of any franchise owner.

In the history of International Cricket so far, no team has boasted of having so many players play together who can smack sixes with so much ease and grace. Shimron Hetmyer seems no different at all from his adversaries like Gayle and Pollard when it comes to hitting sixes and dazzling in the T20 format.

But, then comes the all-important question:

Does Hetmyer have the tenacity to be successful in all the three formats for The Windies or does he even want to play international cricket in the wake of severe abysmally in the way their Cricket is being run and administered?

There is no surprise that Hetmyer looked up to Brian Lara in the course of growing up in Guyana where he was considered as a child prodigy. He captained West Indies to victory in the U-19 World Cup in 2016 where he played some crucial knocks and displayed a tremendous sense of responsibility and game awareness.

For Hetmyer, smacking the ball to all corners will never be an issue as he has already exhibited in his short career so far. But, playing match-winning innings for his team with acceptable consistency may be an area of concern as he tends to throw away his wicket after getting a good start.

There is no doubt that he was one of the top contenders to draw a multi-million deal in the IPL 2019. All the hype surrounding Hetmyer led him to be signed up by Royal Challengers Bangalore, one of the more glamorous IPL teams led by the best batsman of the modern era, Virat Kohli.

Comparing Jason Holder with some of the West Indian greats of the 70’s and 80’s will surely qualify as a no-brainer. But, he has stayed true to national commitments amidst constant flak and a sense of disillusionment with International Cricket. But, he has always showed managed to hold his head high with his courageous performances both with the bat and ball.

To his credit, he has managed to maintain sanity while watching young and talented performers fade away for diverse reasons.

So, can we hope of the rebirth of Windies Cricket with Hetmyer at the forefront?

For the moment, the young man can revel on his birthday and can fantasize about taking bowlers to the cleaners in the IPL. 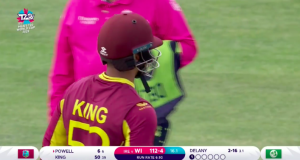 Prashant Banjare - November 17, 2022
0
Batsmen from Jamaica are known for their power hitting abilities but the approach of one young man from the same island, Brandon...