Women’s cricket has seen a wonderful year with the ICC Women’s World T20 as well as in the international series. Based on the blistering performances of the players throughout the year, International Cricket Council (ICC) announced the women’s ODI and T20I teams of the year. Former New Zealand captain Suzie Bates named as the captain of the ODI team while India T20I captain Harmanpreet Kaur named the captain of the shortest format of the game.

Both the sides have been selected by the same voting academy, which comprised members of the media and broadcasters. The members were Melinda Farrell, Melanie Jones, Lisa Sthalekar (all from Australia), Charlotte Edwards, Kalika Mehta (both from England), Anjum Chopra, Snehal Pradhan (both from India), Lesley Murdoch (New Zealand), Urooj Mumtaz (Pakistan), Natalie Germanos (South Africa), Alan Wilkins (Wales) and Ian Bishop (West Indies). They also chose the annual women’s individual awards and took into consideration player performances in the 2018 calendar year as well.

India T20I captain Harmanpreet Kaur has been named the captain of the 11-member squad. She led from the front and took India to the semi-final of the ICC Women’s World T20 2018 in the Caribbean in November. There she scored 183 runs at a strike-rate of 160.5; which includes 13 sixes, highest in the whole tournament. She started with a stunning 103 off 51 against New Zealand in the opening game and became the first Indian to score a century in T20I. She amassed 663 runs at a strike-rate of 126.2 in 25 matches in this year. She is currently in the third position in the ICC Women’s Player Rankings for T20I Batters.

Kaur was all excited by the news and perhaps in a fashion that excites fans when she dances down the ground to a spinner.

In that exact fraction when the ball is lifted into clear blue skies and before it lands on a spot of Earth lying beyond the ropes carries the meaning of what it is to be Harman, isn’t it?

That said, there’s hardly a surprise at seeing Mandhana being elected into the side as well. For a stroke-maker whose approach to T20s and ODIs is embedded in the DNA of playing a bit like the formats, the ICC’s picking of the Mumbai-batswoman is a testimony that the Mandhana storm is rising.

She played a pivotal role for her side in the World T20; where the team reached the semi-final. She finished the tournament with 178 runs at an average of 35.6. Her 83 against Australia in the final game of Group B was her highest score in the tournament.

Moving on from Indians to Down Under, there was exhilaration of the kind Healy brings to the game upon seeing Australia’s keeping- batter picked in the T20 side. Healy amassed 578 runs across 17 matches that came with the strike-rate of 145.95.

Moreover, her dominance in the ICC World T20 was a treat to watch, as she was the highest run-getter and won the ‘Player of the Tournament’. Australia lost to India during the group league match in the tournament where Healy was unable to bat, forced off the field with a concussion. This proves her capability and how significant she is to the Southern Stars.

Apart from being named the captain of the ODI team, Bates has been selected in the T20I squad as well. No other player has scored more than her in this year in the shortest format of the game. She amassed 670 runs in 17 matches which came at an average of 50. Her unbeaten 124 from 66 balls against South Africa in June was one of the best innings of the year which helped her side to set a world-record innings total of 216/1 but that was broken the very same day by England. It’s no surprise, that she is one of the greatest cricketers of her generation.

Bowling all-rounder Natalie Sciver is one of the finest and most versatile names around. Her 3/4 against South Africa helped England to reach the semi-final, while her 52* against India took her side to the final against Australia in the ICC World T20. Along with her, another all-rounder who found a place in the squad is none other than Australia’s Ellyse Perry, one of the best players of recent times. Though she is currently smashing her opponents with the bat in the Women’s Big Bash League, her bowling did the job for her while getting selected. She bagged 20 wickets at an average of just 17.40; in which eight of those came in the ICC World T20.

21-year old Ashleigh Gardner of Australia is the another one in the list. Her career-best figures of 3/22 helped Australia to restrict England within 105 in the final of ICC World T20 and came out as victorious. New Zealand’s off-spinner Leigh Kasperek made her debut in 2015. She took 27 wickets in 15 matches. Her 3/25 against Australia in the World T20 was one of her best.

Another player who has been selected from the ICC World T20 winning team is Meghan Schutt. Ranked No. 1 in the ICC Women’s T20I Rankings for Bowling, Schutt picked up 28 wickets in this year which came at an average of 11.50 in which 10 came in the ICC World T20. She became the first Australia woman player to take a hat-trick in T20I against India earlier this year.

One of the most celebrated players of Bangladesh, Rumana Ahmed became the first player from her country to have been selected in the 11-member ICC squad.  Her leg-spin caused the problem for many batters all over the world. Her 30 scalps came at an average of just 12.13 while conceding only 4.78 runs an over. She played a key role in Bangladesh’s win over India in the Asia Cup for the first time in the history and helped her side to win the Women’s World T20 Qualifier as well.

India’s googly specialist Poonam Yadav’s leg-spin helped her to be placed in the ICC T20I squad of the year along with the ODI. She finished the year as the leading wicket-taker in the format with 35 scalps from 25 matches.

ICC Women’s T20I Team of the Year (in batting order): 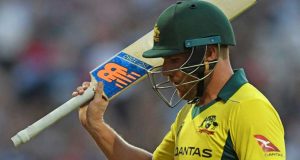 Aaron Finch’s Stomach Must Be Full: He’s Just Had Zimbabwe For...