Who is the highest-ranked Indian bowler in Test Cricket currently?

It is not Jasprit Bumrah. He is fast making his way towards it, but he has played just 10 Tests and the rankings system will reward him in due time. Both Mohammad Shami and Ishant Sharma lie outside the top-20. Ravichandran Ashwin has fallen to the ninth spot but even he is not the top-ranked Indian bowler.

However, for the Indian team that follows the policy of Horses-for-courses, he is a secondary spinner overseas.

Ravindra Jadeja perhaps suffers from the traditional view of treating the left-arm spinners as more of a containing bowler rather than a strike bowler. Even the bowling style is described as left-arm orthodox. The likes of Rangana Herath have worked hard for years to lift the perception, but it is still there.

Another quality which usually lowers the stature of the left-arm spinners is their ability to drain down the number of overs to be bowled rapidly. Jadeja is a fitting testimony of that. Television ads are longer than Jadeja’s overs. Although it is a nightmare for the scorers, it works for the bowling captains in more ways than one. The batsman has no time to think about himself and the game situation when a bowler is just running away with his overs. Concurrently, the bowler tends to become defensive and not think about capturing wickets.

It is no secret that for the first two years of his Test career, Jadeja was scoffed at. After being dropped, he went back to the Indian domestic setup and reaped wickets aplenty for his first-class team, Saurashtra. Since his return to the Indian team in November 2015, the Rajput warrior has been on a killing spree, in Test matches at least.

In 23 Tests played on the Indian soil after October 2015, Jadeja has added 117 victims to his tally. More than one-fifth of all his overs have been maidens. Predictably, he has better average and economy rate than his fellow off-spinner Ravichandran Ashwin but the Tamil Nadu tweaker boasts of a better strike-rate. In the same period, Ashwin has featured in 14 away Tests while Jadeja has appeared in only six. The off-spinner’s bowling variations have made him India’s number one choice in the spin department while traveling out of Asia.

However, Jadeja’s recent rise in his Test stocks can be attributed to the second Test between India and Australia at Perth. The one in which Jadeja didn’t play. After a win at Adelaide, India’s leading spinner, Ashwin, was ruled out due to injury. Instead of picking a like-for-like replacement, Kohli and co took the field at Perth with four pace bowlers. The primary bowling duty was not a concern but they were miserable at the secondary job of batting. Four tail-enders together contributed 11 runs in their eight outings in the Test.

With a batting lineup that still depended heavily on their number three and four, India could not afford to carry such a long tail. Jadeja was called in straight away for the third Test at Melbourne. The left-arm spinner did not have to do much with the bat but bowled 57 overs in the Test. Jadeja picked up five wickets and more importantly, allowed breathing space to India’s premier wicket-takers. He tied the Australian batsmen to one end and sent them back to the pavilion occasionally.

At Sydney, Jadeja formed a record-breaking 202-run partnership for the seventh wicket alongside Rishabh Pant. His 81 came off just 114 balls with seven boundaries and a six. The stand converted India’s tall score into an unscalable one. Jadeja had proved his worth with the bat earlier as well. In his solitary Test appearance on the English soil in the 2018 tour, Jadeja top-scored with 86 in the first innings which helped India get closer to England’s total.

Since the start of 2016, the Saurashtra all-rounder had scored 1012 runs in 25 Tests with a batting average of 42.16, this includes nine fifties and a Test century. His bowling skills require no proof other than his ICC ranking. India has a world-class all-rounder which is not being used to the fullest. With only one spot to contest, he is waging a tough battle. Hopefully, his time will come. 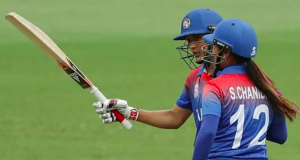