The greats don’t fight for attention. Neither do they search for it; they just happen to be themselves, purely dedicated to a purpose they are driven to live.

Is Elyse Villani, the quiet and dignified soldier from Australia a great whose game deserves more celebration than it gets?

Elyse Villani, a not so familiar name in the star-studded team has been the force behind many heroes in the Southern Stars squad. A player devoid of stardom gushing across all quarters has contributed as much as any player could do to win matches and series, but these efforts go unnoticed when it comes to stats.

In a team, some are classified as consistent players, while few are the kingpins in the team, whereas some play a selfless role by giving up their playing position, but this Victorian has been the unpraised energy, the aggressor and a batsman fit to play at all positions unlike most of her peers.

It was her form in the U-21 side, that bagged her place in the T20 squad in 2009. The international debut was more of a certain dream that she was longing for.

She started her international career at a subtle age of 19 against a strong and dominant White Ferns back in 2009. Villani was offered the opening spot in place of the Aussies veteran Shelley Nitschke where she had big duties to accomplish.

It was a short stint with the bat but Australia won the series with all-round performance by Lisa Sthalekar.

This match couldn’t prove Villani to be an established player, thereby leaving a shaky start to her career.

Later, she was picked for the Women’s T20 World-cup soon after the aforementioned series, which was a chance to represent her country and make it big in the sport.

The take-off of her career might have started at a tournament for world domination. But again, with a well-set team comprising of many stars like Rolton, Sthalekar and Blackwell, Vilani made her inclusion in the playing XI a long-awaited story. With the experienced players preferred over this youngster, Villani was benched throughout the tournament. Incidentally, the Aussies crashed out of the tournament in the Semi-final clash. It again took a while for her to get noticed and make a comeback to the national team.

Her comeback was a significant result of her persistent effort over 3 years to rebuild her batting and fitness for which she headed to England in 2013. Villani without a delay returned to the Domestic circuit in search of a breakthrough and a return to the national team, which happened after 3 long years, when she was recalled back to the T20 circuit. Villani as a player had to wait, perform and also perish in her early career.

In her come-back days, with back to back failures, in over 10 matches, she finally got a breakthrough performance which in turn lead the Aussies to a series win. Her determination and ability to perform under pressure remains as the attributes to retain her spot in the T20’s. She became the compulsory inclusion in the team since 2016 across all the formats.

With an emphasis on her batting style, she is a prolific player through the mid-wicket, offside and third-man region. Once, she finds the momentum, Villani will take the game to the next level. Some of these innate qualities were on display once during the semi-final clash against India in WWC-2017, her dominant play on the field with her magnificent 75. Her carnage against the bowlers took the game away from India for a moment but with the fall of her wicket, it costed them to crash out of the World cup. On a winning note, she wrapped the innings with a well-made 50* to seal the series win against New Zealand in October 2018. She has evolved her gameplay which is more or less customized according to the nature of the game that makes it difficult to make a plot to remove Villani.

WBBL has changed the equations between the players, any team will be keen to get past a hurdle in the form of a massive hitter named Villani.

When she takes the strike and guides her team past a good score, the entire unit is inspired and assured a winning spot.

Today, you refrain from thinking that getting Lanning’s wicket or Perry out cheaply can win you games.

There’s the other Ellyse, albeit an often under-appreciated one at that.

In what had seemed an utterly one-sided contest during Australia’s ouster in the 2017 ICC Women’s World Cup, all thanks to Harman’s pillaging of the Aussies, only one batswoman dared to make the game even, if only to an extent.

Elyse Villani might have been responsible for stroking ICC 2017 World Cup’s most under-appreciated albeit valiant fifty, that dogged 58-ball-75 that edged Australia closer to India.

Alas, the knock, replete with 13 boundaries with a strike rate of 129 couldn’t send her side over the line. But it did give Harman, Smriti, Jhulan and the rest in a hitherto focused camp, the jitters.

Villani’s form is an indication to her marathon innings in the WBBL, who went on to become the top four run-getters in its inaugural editions.

She was handed over the captaincy duties in place of the injured Meg Lanning in 2017, when Villani steered Scorchers to the Finals in the 2017 season. From being a live-wire on the field and her ability to strike big has pulled the crowd to the ground in support of the women’s game.

What’s fascinating is that she does this silently, head-buried in the game, with the precise focus of a mathematician and the zeal of an entrepreneur.

Though her place in the ODI’s was not constant owing to her form, but the limited over specialist has certainly been the true ambassador to the game of Cricket.

She is a fighter who is capable to pull the team to the winning side, be it her quick-fire thirties towards the end of the match or the sharp fielding, this changed the way the game progressed.

It is her fighting spirit and a transformation into being a fit athlete, most of all to pull the team out from the rubbles and her journey to the national team and commitment to become a professional cricketer will inspire many youngsters to take up this sport as a career option. 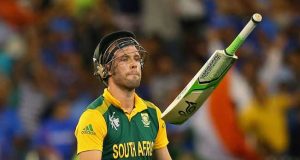 What’s Up With AB? Can De Villiers Defeat His Captaincy Woes?

Gaurav Sethi - June 20, 2017
0
No matter, which team you support, you always feel good when South Africa win. Perhaps it’s South Africa’s ubiquity in the game that a million...